For the love of Mary and hymn: Muslim singer perks up ears

Dalia Ihab Younis shrugs off critics who find it odd or somehow unacceptable that a Muslim woman in a hijab sings hymns venerating the Virgin Mary. 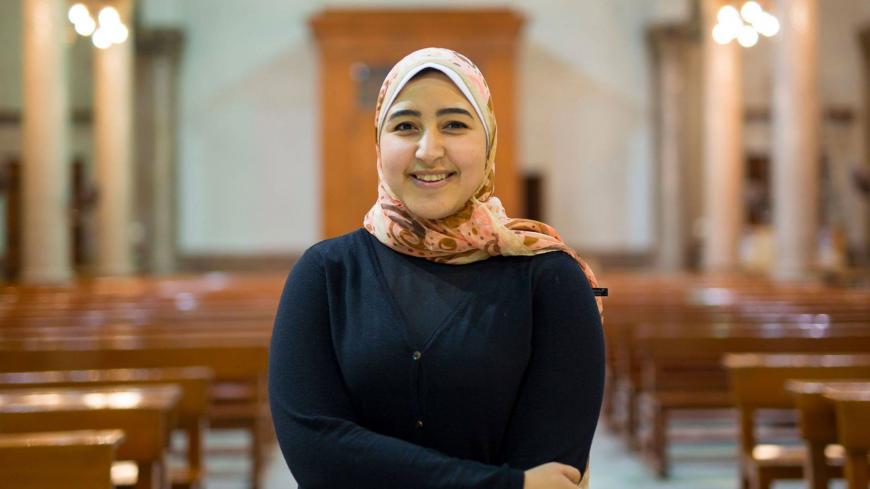 Dalia Ihab Younis, who is relatively new to the music scene, has been attracting attention with her selection of songs as well as her voice, picture uploaded Feb. 27, 2019. - Abanoub Emad / Facebook/Dalia Ihab Younis

“I am not only a hymn singer,” said Dalia Ihab Younis. “Singing hymns is only part of what I do, not my entire musical career.”

It is singing hymns, however, that brought this veiled young woman into the spotlight last Christmas when a program on the Extra News Channel broadcast her voice across the airwaves and onto social media. The image of a veiled Muslim woman singing “Ave Maria” naturally sparked debate. Younis is not unhappy with her newfound fame, but it irritates her that it has typecast her as a “morannema” (hymn singer).

“I just want to stress that I am not a ‘morannema’ as the media repeatedly refers to me,” Younis told Al-Monitor. “I sing other music genres, too. In one of my major projects, I am trying to merge classical music with ‘shaabi’ [people or popular] music,” she said, noting that such pieces can be found on her Facebook page.

Among those videos is one of her singing “Ave Maria, O Maiden, O Mother” in the Princeton University Chapel in 2018. She is also recorded singing “Roses for You” at Saint Joseph's Roman Catholic Church in downtown Cairo to express her love of Mary. Neither were formal performances. Rather, the environment within the churches moved her to sing.

“The reactions I got have been both negative and positive from both the Islamic and the Christian sides,” she said. “I received a lot of beautiful and terrible remarks. But I was raised by a family who taught me freedom of choice and to be accountable for the consequences, and this is what I do.”

Although Younis loved singing as a child and is often praised for her strong voice, she is a newcomer to the music world. She previously studied medicine at Ain Shams University, but did not practice the profession after graduation.

“I found the career of medicine too demanding, even while I was still a student,” Younis asserted. In 2016, she decided to follow her passion for music. “I joined the German University in Cairo's music ensemble,” she explained. “My first music concert was on Valentine's Day in 2017.”

A good listener and a fan of the singer Fairouz while growing up, Younis learned to sing “Ya Maria” from the Lebanese superstar. She then learned more hymns, including “Roses for Our Lady,” while with the German ensemble.

Younis’ television appearance came about after her friend Reham Yacoub, a journalist who knew that she sang hymns, asked her to appear on a Christmas program. From that point on, she has been known as “the Muslim hymn singer.”

“There is no contradiction between my appreciation of Christian hymns and my [Muslim] beliefs,” Younis said. “For example, our admiration of ancient Egyptian civilization does not mean that we agree with the pharaohs’ doctrines. I sing hymns as a form of art, not as a religious act. What I [show] is a real, unrehearsed example of coexistence.”

Younis admits that she loves the Virgin Mary, who is mentioned in the Quran, and enjoys singing to and about her. Amna Nosseir, professor of Islamic philosophy at Al-Azhar University, agrees that Younis cannot be criticized under Islamic teachings for her song selection.

“Hats off to this girl!” Nosseir exclaimed to Al-Monitor. “She knows her religion very well. In the holy Quran, we [recognize] ‘Maryam’ [Mary]. There is nothing in Islamic law that prohibits singing for the Virgin Mary.”

Nosseir emphasized, “She is just singing to express her love for the blessed Maryam, not participating in Christian prayers or a mass.”

Gamal Asaad, a Coptic thinker and former member of parliament, also could find no fault in Younis' singing. “This is a normal act,” he told Al-Monitor. “She is singing hymns for the love of the Virgin Mary just like there are many Christians who sing Sufi songs.”

Asaad underlined the shared origin of the religions of the book — Christianity, Islam and Judaism — and how Egypt has been working to replace sectarian thinking with a concept of Egyptian citizenship.

“All divine religions came from the same source,” Asaad remarked. “That is why I do not think a Muslim woman singing hymns is strange.”