The global coalition is turning its attention to Iraq to avoid a resurgence of the Islamic State. 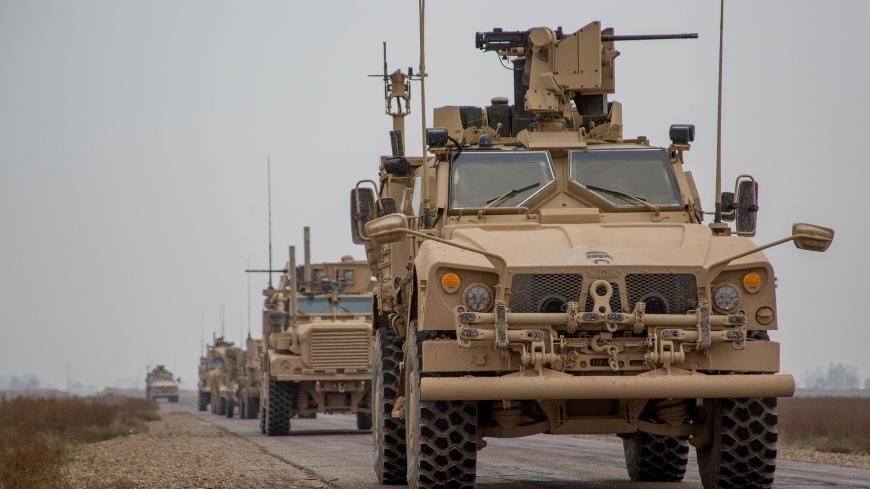 A convoy of the US-led international coalition against the Islamic State stops to test-fire their weapons in the Middle Euphrates River Valley in the Deir ez-Zor province, Syria, Nov. 22, 2018. - Matthew Crane/US Army/Handout via REUTERS

The US-backed coalition to defeat the Islamic State (IS, also known as ISIS) is scrambling to rejigger its mission following President Donald Trump’s decision to pull American troops out of Syria.

In a message to coalition member nations sent on Dec. 19, just as Trump announced the phased withdrawal of 2,000 US service members from Syria over the next 30 days, the coalition said it “must continue its preparations for the next phase of its campaign” despite the American decision.

“We remain fully committed to assisting the government of Iraq to continue to fight the remaining elements of ISIS in Iraq and those that threaten Iraq from Syria,” the coalition said in a message obtained by Al-Monitor. “The coalition should increase its focus on disrupting ISIS’s global network through increased information sharing and complementary efforts on counter-finance, counter-messaging and security-law enforcement.”

The 73-nation alliance, which had been represented on the US side by presidential envoy Brett McGurk before he resigned over the Syria pullout on Dec. 20, plans to meet at a Feb. 6 ministerial to discuss the next steps in uprooting IS. But it remains unclear what role the United States will have in the campaign going forward, even as Trump has suggested in subsequent tweets that the Syria withdrawal will occur more slowly than initially indicated.

The coalition statement indicates that it still seeks the “enduring defeat” of IS by stabilizing liberated areas and stopping the spread of the group. The US president, however, tweeted Dec. 23 that his Turkish counterpart, Recep Tayyip Erdogan, would “eradicate” the remnants of the caliphate.

Though Secretary of Defense Jim Mattis, a leading architect of the counter-IS campaign, has left the Pentagon, the US administration reportedly maintains military options to deal with the group. On Dec. 22, the New York Times reported that American commandos could strike at the remnants of the group from outposts in Iraq.

Yet as the coalition struggles to realign its mandate, US military officials have offered an uncharacteristically frank assessment of the years-long US effort to build up Iraq’s military, which faced significant attrition in the fight against IS.

In testimony to lawmakers last month, Marine Lt. Gen. Kenneth McKenzie, the incoming head of US Central Command, called the Iraqi Security Forces “a competent force.” But he said that key factions, such as the elite counterterrorism service that suffered 40% losses in the Mosul fight last year, “has yet to receive a break to recover and reconstitute” after IS' territorial defeat in Iraq.

Iraq’s border force, McKenzie added, was “decimated” after IS' 2014 campaign. It remains “undermanned and poorly equipped,” he said, and would need two years to reach full capability. What’s more, McKenzie said in testimony submitted to Congress in December, Iraq will not be able to pay for the maintenance of US-supplied equipment.

“Is the border porous? Most likely so,” Army Col. Jonathan Byrom, deputy director of US operations in Iraq, told Al-Monitor at a December briefing at the Pentagon.

The United States also will face questions in 2019 over whether to integrate Iran-backed Popular Mobilization Units into the bulk of the Iraqi Security Forces, which would mean training and equipping the Shiite units. The Iraqi army, experts say, only has the capability to support small vehicles on its own.

“They don’t have a lot of money,” said Michael Knights, a fellow at the Washington Institute for Near East Policy. “The government has been on an austerity budget for a while. The fight for investment is very, very intense.”

That could become a major problem for Iraqi Prime Minister Adel Abdul Mahdi, whose government has been on an austerity budget even as citizens demand the restoration of the electrical grid and potable water in key Sunni cities destroyed in the fight against IS. Meanwhile, the Shiite-dominated militias expect to be rewarded for helping defeat the group and save Iraq.

“They’re going to want pensions, they’re going to want all of that, and [Iraq’s] economic situation doesn’t allow for that,” said Alex Mello, an analyst with Horizon Client Access. “A few years down the road, they’ll have all of these pissed-off guys who fought against IS who aren’t getting paid.”