How US sanctions intensify rent-seeking in Iran’s pharma sector

As US sanctions hit Iranian patients, it is becoming clear that the impact of the sanctions — including renewed opportunities for rent seeking — are also intensifying turf wars in the country’s pharmaceutical sector. 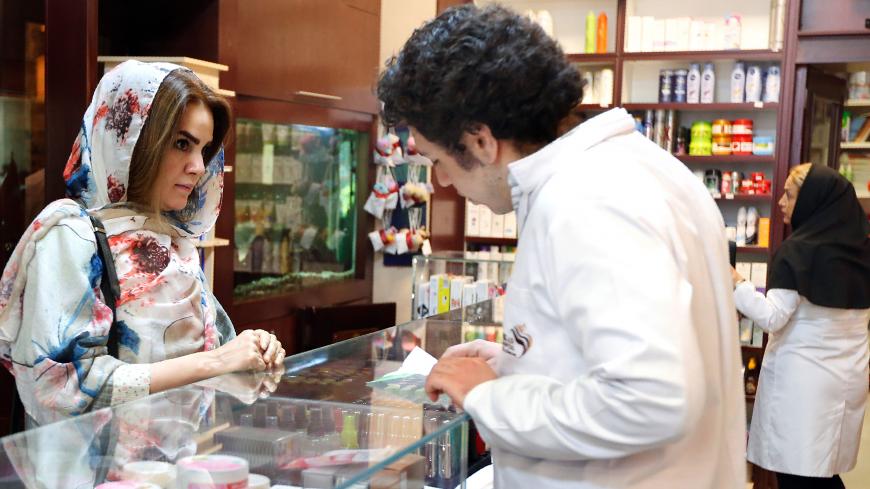 An Iranian woman shops at a drugstore at the Nikan hospital in Tehran, Iran, Sept. 11, 2018. - STRINGER/AFP/Getty Images

The recent resignation of Iran’s minister of health, Hassan Ghazizadeh Hashemi, led to many speculations. Officially, insufficient allocations in the next Iranian year (beginning March 21) was cited as the reason, but commentators also referred to factional infighting within the Hassan Rouhani administration as well as shifting interests as a result of renewed sanctions. One hint emerged when a video was released from the outgoing minister’s last meeting with his senior staff, in which he stated that practices such as corrupt deals, importation of low quality products and rent-seeking would clash with his personality. This statement would suggest that Ghazizadeh’s resignation was the consequence of the shifts in the industry as a result of renewed US sanctions, i.e., the fact that Iran would have to yet again start importing medicine and medical devices from Asian sources. However, there is more to this development than meets the eye. In fact, a closer analysis may indicate how sanctions, rent-seeking and politics overlap in Iran.

Before shedding light on the related statements, three facts need to be considered:

According to Gholamreza Asghari, former head of the Food and Medicine Organization, the country’s pharmaceutical market is worth $20 billion. While quantitatively 96% of the needs are manufactured domestically, the value of the high-end imported products stands at about $2 billion annually. The sector is heavily subsidized on all levels and one can see the competing interests between local manufacturers, importers and exporters and also the potential for rent-seeking through corruption in licensing as well as smuggling — a phenomenon that will rise as a result of renewed US sanctions. One fact about the smuggling of medicine is its two-way nature. In other words, many of the heavily subsidized domestic products are smuggled out of Iran to neighboring countries, while foreign brands are illegally brought into the country.

In 2013, Ghazizadeh was the odd minister in Rouhani’s first-term Cabinet. He was the only minister who had no previous political position. In fact, he came from a business and academic background. In the 1990s, he founded the Noor Ophthalmology Complex in Tehran, which made him a wealthy businessman. With this background, he started reforming the health sector, focusing on financial transactions, especially the share of insurance companies in bearing the cost of health care. While this shift earned him popularity, he started making enemies within the country’s complex business networks. His so-called health evolution reform shifted many interests among industry stakeholders.

One of Ghazizadeh's major coups was the relocation of the Iran Health Insurance Organization from the Ministry of Cooperatives, Labor and Social Welfare to his own ministry. This led to one of the most public ministerial clashes within the Rouhani government, i.e., the clash between Ghazizadeh and former minister of welfare, Ali Rabiei, who was eventually impeached. The former represented the view that the Social Security Organization was too “commercial” and that the decisions in the health sector should not be driven by commercial calculations. Both former ministers were certainly under pressure by various networks representing diverse interests. The competition between these networks is not always about representing legitimate interests (such as those of local manufacturers), but rather how much financial power is concentrated in one entity and what it means within the political sphere. The shifting of the Iran Health Insurance Organization equaled control over the organization that processes health insurance for half of the country’s population, with the other half mainly covered by the Social Security Organization. At the same time, even after losing the Health Insurance Organization, the Ministry of Welfare remains one of the core power centers as it controls the Social Security Organization — the owner of one of the largest business conglomerates in the country. Ghazizadeh essentially weakened the power of his rival organization and empowered his own ministry.

As such, it is not a surprise that only an insider could be put in charge of the Ministry of Cooperatives, Labor and Social Welfare after Rabiei’s departure. Against the will of many Rouhani supporters, Mohammad Shariatmadari, who had resigned from the Ministry of Industry, Mining and Trade after speculations about his impending impeachment, was appointed as the new minister of welfare.

Interestingly, the reaction of Mohammad Nobakht, the vice president and head of the Management and Planning Organization, to Ghazizadeh’s resignation points to the significance of the above shift. Nobakht stated: “At one point, Mr. Rabiei … was the target. They extracted the Iran Health Insurance Organization and moved it to the Ministry of Health. … Such moves don’t solve our problems.” Also, the appointment of Saeid Namaki (a former planning organization deputy director and a protege of Nobakht) as the new caretaker of the Ministry of Health shows that the network around the Management and Planning Organization has gained the upper hand in the most recent rivalry. In his first public speech, Namaki pointed to the need to continue the reforms in the health sector and to get rid of corrupt practices.

The existence of corruption and malpractice is not disputed, but no one has managed to take effective steps to counter it, because too many power centers are benefiting from these practices themselves. There have been attempts in parliament to carry out investigations on medical imports to determine whether a mafia-like network is involved, but they have never led to any visible legal processes.

One of the notable personnel changes after the departure of Ghazizadeh was the appointment of Iraj Harirchi as the new head of the Food and Medicine Organization. Harirchi has now set the tone in his first speech by stating that the key to resolving the issues in the industry would be to support local manufacturing. This is certainly not the end of this competition between networks to seek illegitimate access to the rents in the pharmaceutical sector. Unfortunately, as external sanctions and the huge differential between official and unofficial exchange rates make the rents more lucrative, one can expect more maneuvering among the corrupt networks, with consequences for political figures.