The Hassan Rouhani administration has slashed budget allocations for seminaries and other religious institutions, fueling a debate on whether Iran's theological seats of learning ought to be self-funded. 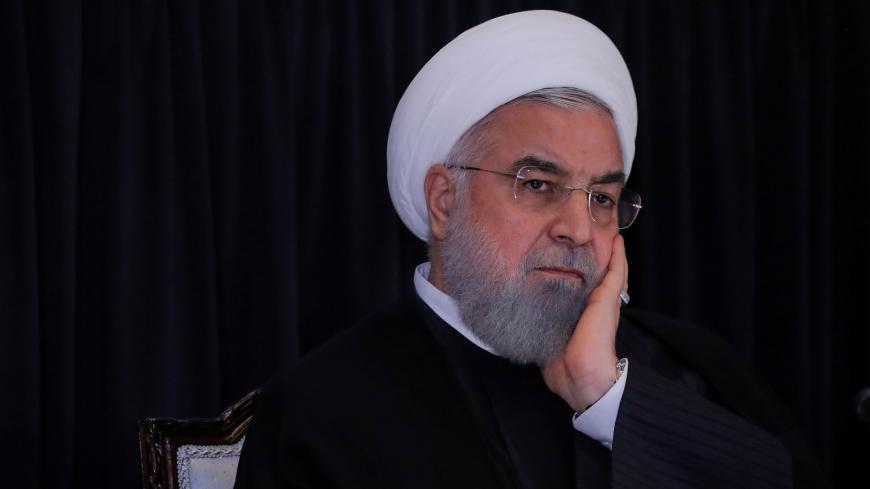 Iran's President Hassan Rouhani listens during a news conference on the sidelines of the 73rd session of the United Nations General Assembly at the UN headquarters in New York, Sept. 26, 2018. - REUTERS/Brendan Mcdermid

Various institutions and seminaries receive money from the government to promote religion and train clerics. In the budget bill submitted by the administration to the parliament, religious institutions and seminaries are facing a serious reduction in their annual budgets. For example, the government has allocated some 3.063 trillion rials ($72.86 million) to the Supreme Council of Qom Seminaries for the coming Iranian year. In comparison, the council received 4.45 trillion rials ($105.9 million) in the current year (ending March 20).

Ayatollah Ali-Reza Aarafi, who oversees all seminaries across the country, lamented the current state of affairs on Jan. 17, saying, "The seminary is in its worst condition economically." He added, “The budgets of seminaries have been reduced by a third" of what they were last year.

It is unclear whether the administration of moderate President Hassan Rouhani is pursuing a particular aim — beyond the obvious cost savings — with the vast cuts in funding for religious institutions. However, Rouhani may be taking advantage of the economic pressure on the country from the reimposition of US sanctions as a pretext to reduce the budgets of seminaries. It should not be overlooked that the leaking of previously undisclosed budget allocations for religious institutions in December 2017 helped stoke massive public dissatisfaction over that winter.

Since Rouhani first took office in 2013, he has sought to make the government budget as transparent as possible through unprecedented measures. The Iranian public has become more aware of which institutions are being allocated funding, leading to greater sensitivity about reports on the matter. In early 2018, many Iranians took to social networks to express their disapproval of the budgets allocated to seminaries and religious institutions. What has particularly incensed the public is the funding granted to religious institutions that have little to show in terms of output. The Imam Khomeini Research Institution is among these bodies. Interestingly, the institution is controlled by Ayatollah Mohammad Taghi Mesbah Yazdi — a staunch enemy of Rouhani and the spiritual leader of the hard-line camp in Iran.

In a speech at the University of Tehran this past December, the Iranian president’s cultural adviser urged students to hold workshops to review the annual budget of the country. "There is a tribe … behind every line of the budget. … There are a thousand institutions that you have not even heard of. When we want to cut their budget, they take the whole budget of the country hostage," said Hesamoddin Ashna.

The seminaries receive money from two main channels: the government and the grand ayatollahs.

Every year, worshipers pay one-fifth of their acquired wealth — including business profits — to grand ayatollahs. Payment of "khums" is a religious obligation in Shiite Islam. Based on Islamic law, the grand ayatollahs are obliged to spend this revenue on promoting Islam and aiding impoverished "sayyids" (descendants of the Prophet Muhammad). The grand ayatollahs chiefly spend the collected khums on seminaries, including monthly stipends ("shahrieh") to seminary students and teachers. However, they also receive donations from worshipers as part of vows or commitments to carry out specific acts ("nazr"), which are usually funneled to poor families.

In broad terms, seminaries in Iran are divided into two views about how they ought to be governed.

Some argue that seminaries should be independent of the state and nurture young religion students solely with funding provided by grand ayatollahs. This conviction has been openly stated by the grand ayatollahs, including those who are seen as close to the state. For instance, Grand Ayatollah Naser Makarem Shirazi, known for his proximity to the establishment, stated as recently as this past August, "The seminary should be independent of the government because such a dependency has negative effects." The reasons behind such calls are perhaps better explained by the influential Jomhuri-e Eslami newspaper, run by moderate cleric Masih Mohajeri, which reported back in December, "There is no doubt that the seminary and the affiliated institutions can only protect their independence by being governed by their own budgets [which are] secured voluntarily by the people, [while] the governmental budget will make them dependent and flexible in the face of the government and the establishment’s policies."

Describing the seminaries’ financial dependence on the state as a "huge danger," the Jomhuri-e Eslami daily emphasized that it will “gradually cut people's ties to the seminaries, and a day will arrive when people will feel that there is no necessity to financially aid the seminaries and religious institutions. Under such a condition, a millennium of popular support for the seminary will be gone, and an important institution which confronted the oppressive powers by relying on its independence will lose the philosophy of its existence." Of note, the khums has for centuries been a key reason for the relative independence of the Shiite clergy, whether under Ottoman rule in Iraq or under the Pahlavi state in Iran.

Those who adhere to this view assume that the first group's wishes are not realistic. Mentioning the demand for the seminary’s independence by a number of grand ayatollahs — amid simultaneous complaints about the decrease of the number of new clerics — Ayatollah Reza Ostadi, a prominent cleric and a member of the Supreme Council of the Qom Seminary, stated on Jan. 13 that shahrieh are not enough for clerics to make ends meet. He then explicitly questioned the grand ayatollahs, urging them to present solutions and also address the question of whether the seminaries should get money from the state.

In the meantime, the big picture is becoming ever clearer: Whether the seminaries want it or not, they have to accept the reality of the lower budgets allocated to them given the dire economic situation of the country. However, the change could be positive as it could serve as a test of whether they can exist — and thrive — independently of the state.