Iran says moving towards readiness to ramp up nuclear program

Iran's atomic chief says he is establishing a readiness to revive the country’s nuclear program, in line with an order by the supreme leader. 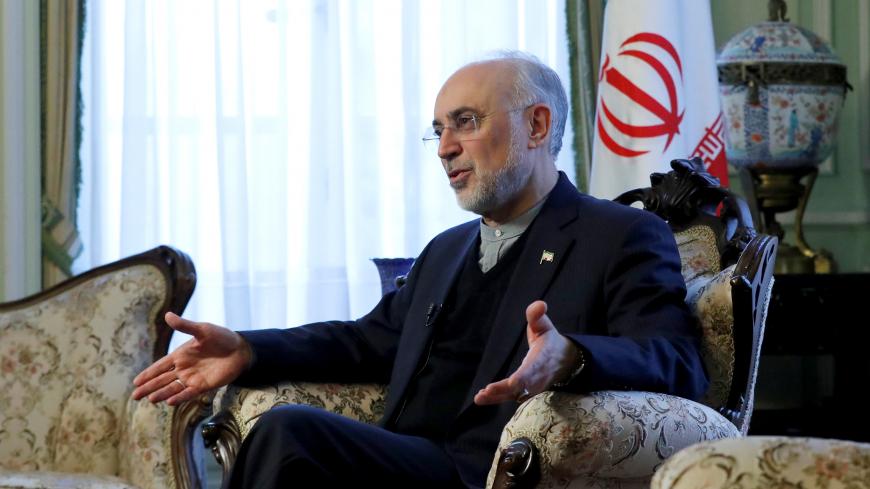 The head of the Atomic Energy Organization of Iran says his country has taken key steps toward being able to quickly resume uranium enrichment to the 20% level, an activity it agreed to suspend under the Joint Comprehensive Plan of Action (JCPOA) struck with world powers in 2015.

Ali Akbar Salehi made the remarks in a lengthy face-to-face interview on Iranian state broadcaster's Channel 4 on Jan. 22. The nuclear chief unveiled details about the path Iran has already taken toward being able to resume its largely restricted nuclear program. The new plans range from building more power plants to a scheduled transfer of 30 tons of yellowcake to the uranium conversion facility outside the city of Esfahan. The latter would be a key step toward ensuring the availability of raw material should Iran decide to exit the nuclear deal and ramp up its enrichment activities.

He also spoke of what his organization has done to execute a key directive issued by the country's supreme leader issued last June. Ayatollah Ali Khamenei had then called on the country's nuclear authorities to establish a readiness to expand enrichment capacity to 190,000 separative work units (SWU), which the supreme leader previously described as Iran’s “absolute need.” Iranian officials say the country needs an enrichment capacity of 190,000 SWU to ensure a domestic supply of fuel for the Russian-built Bushehr nuclear power plant. Salehi said a "super modern" hall with necessary facilities has been fully constructed for the purpose of enrichment at the latter scale.

Ever since the United States withdrew from the JCPOA last May, Iran has warned the remaining signatories to the accord that resuming enrichment at the 20% level is an easy task, should it decide to do so. But perhaps what made Salehi's latest interview significant was a revelation about the reactor core at the Arak nuclear facility in central Iran, which was a fundamental issue during the nuclear negotiations.

Under the JCPOA, Iran was obliged to remove the calandria of the Arak reactor and fill its tubes with cement as part of efforts to modify the facility to ensure there was no plutonium path to the bomb. "We agreed to do so," said Salehi. "But we also purchased [and stored] equivalent tubes and we did not declare this [to our negotiation counterparts]." He noted that the decision was shared only with "the highest authority" of the Islamic Republic, the supreme leader.

"When our team was holding the negotiations, we knew that the other side could violate the deal. The supreme leader had told us off about their noncompliance and asked us to act with wisdom," he said, while boasting that Iran "not only did not burn the bridges behind, but also built new ones to smoothen a quick resumption in case [deemed necessary]." The Iranian nuclear chief further revealed that Tehran was already doing the job "silently," as the nuclear talks were ongoing, but that "this was in no breach of [International Atomic Energy Agency] regulations," hinting that the UN nuclear watchdog had been informed — as would, one assumes, the country from which Iran allegedly purchased the metal tubes.

Iranian media outlets interpreted Salehi's remarks on the metal tubes as a "wise tactic" to construct a reactor in accordance with pre-JCPOA blueprints, in case the other side violated the deal. Iran’s obligation to fill the core of its nascent Arak reactor with cement has long served as a pretext for hard-liners' attacks on the nuclear negotiating team, whom they accused of giving in to the West during the talks. During a heated exchange in parliament in 2015, conservative lawmaker Ruhollah Hosseinian (2008-2016) threatened to bury Salehi in the very reactor if he went ahead with the cement plan.

To many, Iran's plans to restart enrichment at the 20% level — if implemented — would be tantamount to a coup de grace against an already fragile JCPOA. "Resuming enrichment and its nuclear program, Iran will make an international consensus against it a definitive outcome," tweeted one Iranian.

For months, Iran has warned that it is losing patience with Europe’s apparent failure to live up to its commitments to provide economic dividends under the nuclear deal. As such, Salehi's remarks come at a time when the long-awaited European Special Purpose Vehicle appears to finally be rolled out after monthslong and repeated delays. Iran has been hoping that the SPV will help revive its economy, which is feeling the pinch of reimposed US sanctions.

The seriousness of the apparent steps to ensure readiness for a quick ramping up of the Iranian nuclear program has yet to be made clear. Until then, the argument that Salehi's remarks about the metal tubes is for domestic consumption remains valid. "My sources think this is all for domestic purposes," tweeted the Wall Street Journal's Laurence Norman after approaching sources in the know about the significance of the metal tubes. "I guess if deal was formally dead, #Iran may struggle to get hold of equivalent pipes in future. So useful. But on the margins."