An Iranian political prisoner has rejected US concerns for human rights — including his own imprisonment — noting the double standards in their application. 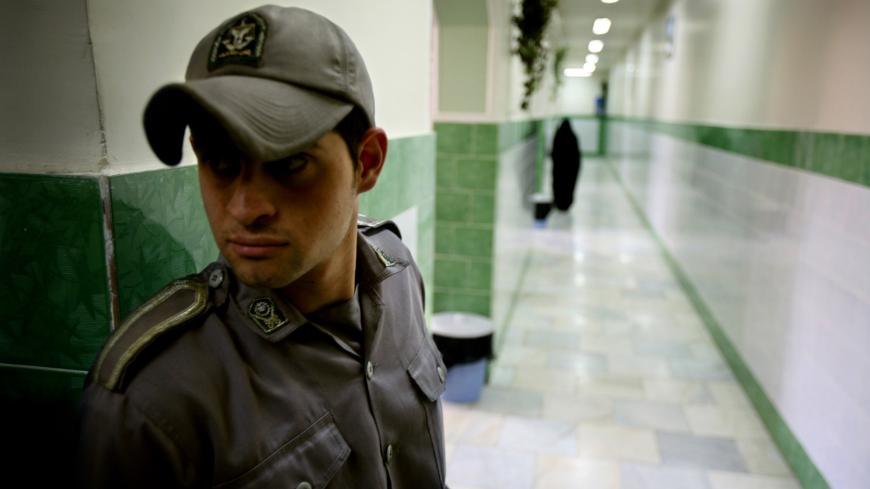 A prison guard stands along a corridor in Tehran's Evin prison on June 13, 2006. Iranian police detained 70 people at a demonstration in favor of women's rights, the judiciary said on Tuesday, adding it was ready to review reports that the police had beaten some demonstrators. June 13, 2006. - Morteza Nikoubazi

Iranian political prisoner and human rights activists Farhad Meysami has written an open letter from inside Iran’s Evin prison, criticizing his treatment at the hands of Iranian courts and rejecting stated US concerns for the human rights situation in Iran and for his own case in particular.

Meysami was arrested in July over protests related to the compulsory hijab. Authorities confiscated from his home pins that read “I am against compulsory hijab.” He began a hunger strike in August in protest against his conditions and lack of access to proper legal representation. His case has been referenced by a number of international organizations, including Amnesty International, which condemned Iranian authorities for pressuring him to end his hunger strike, and United Nations human rights experts, who have called for his release.

A press release from the US State Department has also directly cited Meysami’s case. “We are deeply concerned about the rapidly deteriorating health of Dr. Farhad Meysami,” the December 7 statement read. “The United States condemns the arbitrary detention of Dr. Meysami. This is a brazen violation of human rights. The United States calls on the Iranian regime to immediately release Dr. Meysami and all political prisoners who are unjustly imprisoned. The Iranian people deserve a government that respects their rights and legitimate demands, not one that subjects them to slow deaths in degrading cells for peacefully demanding what is rightfully theirs — universal human rights.”

Meysami’s letter was divided into two sections. In the first section, he recounts his challenges dealing with the Iranian court system, such as not having access to his lawyer, being forced to choose a lawyer among a list of court-approved lawyers and not being given time to prepare for his court dates. He cites Abolqasem Salavati by name numerous times, a notorious judge who is head of the 15th branch of the Islamic Revolutionary Court in Tehran and known for handing down heavy sentences to activists.

In the second section of his letter, Meysami called out the United States for asking for his “freedom.” He wrote that at first he was “surprised” to see his name even mentioned by the department run by US Secretary of State Mike Pompeo, who has previously wanted to “bomb Iran.”

Meysami wrote, “I prefer to spend my entire life in prison … than for one second be included among [those who bear] the shame of supporting deal breakers who turned their backs on moral and legal principles and left the wise and peace-seeking JCPOA [Joint Comprehensive Plan of Action] accord and once again imposed inhumane sanctions, which have dragged millions of my compatriots below the poverty line.” On May 8, 2018, the United States unilaterally exited the JCPOA — an eight-party deal between Iran and the five permanent members of the United Nations Security Council plus Germany — in which the Islamic Republic reduced its nuclear capabilities in exchange for sanctions relief.

Indirectly referencing the case of murdered Saudi journalist Jamal Khashoggi, Meysami added that he is certain that if the United States and Iran were allies, “You would not only close your eyes to my imprisonment but also to the sawing to pieces of dozens of people like me.”

The letter received a lot of traction on social media. Iranian activist Zia Nabavi, who served nine years in prison for his political activities, tweeted that Meysami’s letter has two separate concerns: “1. The injustice of the government and judiciary, which violates the rights of citizens. 2. The bullying [by] Pompeo and his partners, who have targeted the [Iranian] people with the weapon of sanctions. Ignoring either of these parts is to dismember his political understanding.”

Prominent Reformist figure Mostafa Tajzadeh, who also spent time in jail after the disputed 2009 presidential elections, tweeted, “Farhad Meysami’s important letter must be understood as a continuation of Iranian political tradition from the [1905-11 Iranian] constitutional revolution to the present” in that he emphasized the significance of freedom and independence while rejecting domestic tyranny and foreign intervention. Tajzadeh said the judiciary should “immediately release him.”