Intel: Why US plan to have Europeans run Syria safe zone is no sure bet

The Donald Trump administration has asked European allies to participate in a safe zone to protect the US-backed Syrian Kurds. 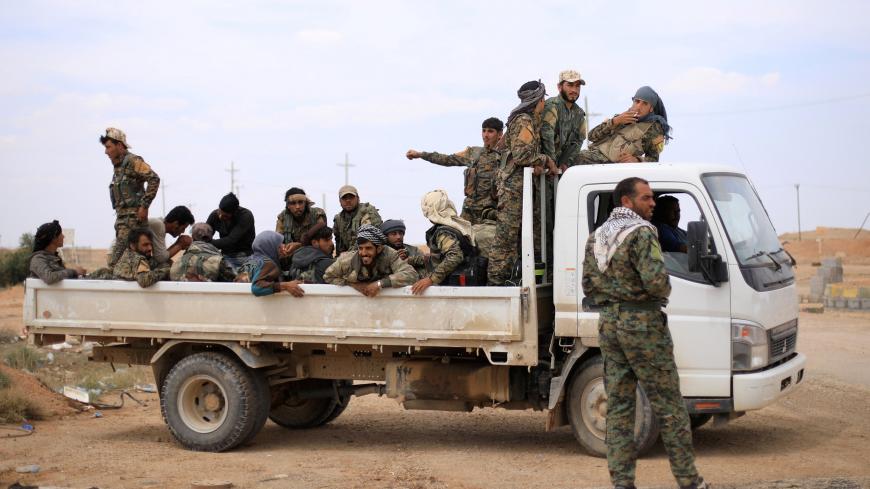 Fighters of the Syrian Democratic Forces (SDF) sit in the back of a truck in Deir ez-Zor, Syria, May 1, 2018. - REUTERS/Rodi Said

The Donald Trump administration has asked European allies to participate in a safe zone to protect the US-backed Syrian Kurds, the Wall Street Journal reports.

Why it matters: At face value, the rumored plan appears to be a win for the Syrian Democratic Forces (SDF). The group’s political wing sent a delegation to Washington this week in an effort to lobby the US administration to slow down the withdrawal of 2,200 US troops and stop the creation of a Turkish-run safe zone.

“We know what this safe zone will look like. A year ago Turkey invaded the SDF-controlled and majority Kurdish region of Afrin in northwest Syria along the Turkish border,” the Syrian Democratic Council — the SDF’s political wing — wrote in talking points seen by Al-Monitor. “Turkey and its jihadist allies displaced the Kurdish civilians, destroyed Yazidi temples and resorted to ethnic cleansing,” wrote the council.

Looks can be deceiving: But the US plan doesn’t have any hard commitments so far. No European countries have agreed to send troops. Foreign Policy reported last week that the United States is also considering leaving open the Al-Tanf base that interdicts an Iranian supply line into Syria, leaving the impression that the administration has a lot of options left to sort through. But those plans could also be subject to a challenge from Democrats in Congress who have sought a new legal justification from the White House on wars in the Middle East.

Another version: But the Trump team has previously managed to get non-American units to backfill departing US troops — and for Gulf states to pass along foreign aid — even before the pullout became official. In April 2018, the Wall Street Journal reported that national security adviser John Bolton had spoken with Egyptian officials about committing to a troop presence in northeastern Syria. Former US officials, however, told Al-Monitor that Cairo had limited ability to carry out such an operation despite receiving $1.3 billion in annual US military aid.

The United States also touted $150 million in donations from Saudi Arabia and the United Arab Emirates to backfill US stabilization funding that ended last year. But it’s unclear if that money has had any impact on the ground.

What’s next: The US State Department is set to host a summit in Washington next week with foreign ministers representing more than 70 nations in the US-led anti-Islamic State coalition. That could provide another opportunity to discuss the buffer zone proposal.

Know more: Read Pentagon correspondent Jack Detsch’s latest on the warning from the Syrian Kurds to Washington: They say they are willing to align with Bashar al-Assad’s forces if they can’t get US guarantees of protection from Turkey.