President Abdel Fattah al-Sisi announced the formation of a committee tasked with fighting sectarianism, a move widely welcomed by both Christians and Muslims in Egypt. 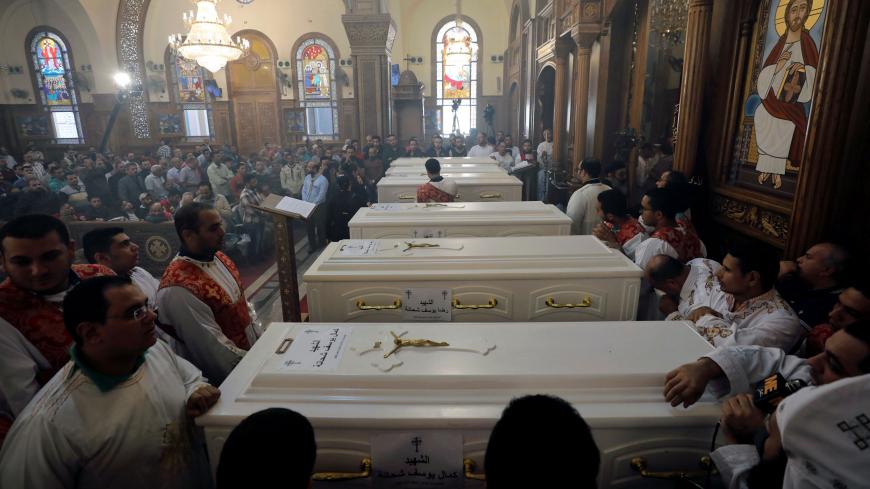 Mourners gather for the funeral of Coptic Christians who were killed in an attack, at the Prince Tadros Church in Minya, Egypt, Nov. 3, 2018. - REUTERS/Mohamed Abd El Ghany

Egypt’s Christians have rejoiced as President Abdel Fattah al-Sisi formed a higher committee to combat sectarianism and put an end to attacks against Copts in the country. The decision, taken Dec. 29, has drawn admiration and praise of both Christian figures and parliamentarians.

Right after the announcement of the presidential decree, the Coptic Orthodox Church released a statement, saying that the decision to form the committee will contribute to promoting tolerance and interdependence as well as renunciation of violence and terrorism and showing the world the true image of Egypt.

“The decision will also contribute to building modern Egypt, as extremism devours any growth witnessed by the Egyptian society in various fields. The decision will help spread community peace, security, social justice and the principle of true citizenship,” the spokesman of the Coptic Orthodox Church, Paul Halim, said in the statement.

According to the presidential decree, the committee will be chaired by Magdy Abdel Ghaffar, the president's adviser for security and counterterrorism affairs, and its members will be representatives from the Armed Forces Operations Committee, the Military Intelligence and Reconnaissance Administration, the Administrative Control Authority and the National Security Agency.

The committee is entitled to invite all ministers and officials concerned to attend its meetings when considering relevant topics. It will be responsible for formulating a general strategy to prevent and confront sectarian incidents as well as follow up on their implementation and mechanisms to deal with such events as they occur.

The committee shall also prepare a periodic report on its work, recommendations and implementation mechanisms and present them to the president.

Commenting on the decision, Grand Mufti Shawki Allam said that this committee is an important step in upholding principles of citizenship and supporting the efforts to promote coexistence among the Egyptian people.

In a statement Dec. 31, Allam said that Egypt’s Dar al-Ifta is ready to provide all forms of support and cooperation with the new committee, stressing that the national and legitimate duty requires “that we all strive to achieve harmony and social peace among all sectors of Egyptian society.”

Christians and parliamentarians have widely praised the decision, describing it as unprecedented and reassuring for the country’s Copts who have long been suffering from sectarian incidents.

Coptic writer Gamal Assad said that the president is taking unprecedented steps to achieve justice and equality among all citizens. “The decision comes in line with President Sisi’s endeavors to improve the conditions of Christians and prevent any future sectarian acts,” Assad told Al-Monitor.

He said that the committee’s work should not only be restricted to security, but it should also include ideological, cultural and social strategies in order to change the culture of society and promote the values of citizenship, tolerance and coexistence.

“The committee should have a long-term strategy that can put an end to sectarian violence in all its forms as well as strictly use the rule of law in combating sectarianism,” Assad added.

The presidential decree was also praised by the country’s parliamentarians. Member of parliament Mohamed Abu Hamed said that the decree is a remarkable move and it signals the state’s keenness on dealing with sectarianism as an issue of national security.

“It is clear now that the state is considering sectarianism a matter that is threatening national security because the members of the committee are from the country’s security agencies,” Abu Hamed told Al-Monitor, noting that cases of sectarian violence were normally dealt with through customary reconciliation sessions that do not usually give the criminals their deserved punishment.

“Now the state is realizing that it is mainly through the implementation of the rule of law that sectarian incidents would be reduced,” he said.

Egypt’s Copts have long been targeted by terrorist attacks. On Jan. 6, a police officer was killed and two others were injured while defusing a bomb in the vicinity of a church in Nasr City, eastern Cairo.

In recent years, the Egyptian leadership has been trying to put an end to sectarianism and build bridges with the country’s Christians. Since Sisi took office, he has been attending Christmas mass with Christians in order to mark the occasion. No previous Egyptian president has ever done this.

On Dec. 6, Sisi inaugurated the largest cathedral in the Middle East region at the new administrative capital, which is located on the outskirts of Cairo. The president also attended the Christmas mass at the new cathedral, wishing Christians more success and progress.