The US president’s snap decision to withdraw 2,200 US troops from Syria will have an impact across the region. 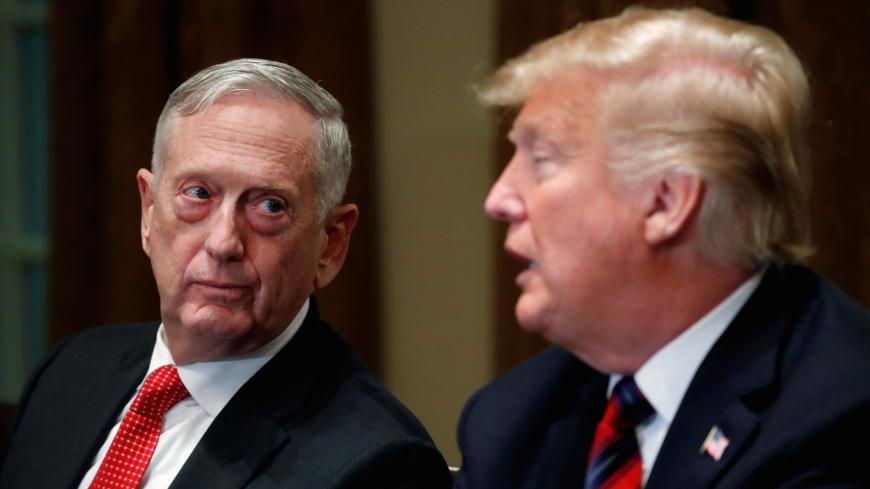 US Defense Secretary James Mattis listens as US President Donald Trump speaks to the news media while gathering for a briefing from his senior military leaders in the Cabinet Room at the White House in Washington, US, Oct. 23, 2018. - REUTERS/Leah Millis

The Donald Trump administration’s snap decision to withdraw 2,200 US troops from the battlefield in Syria today came from a familiar source: the president himself.

“We have defeated [the Islamic State] in Syria, my only reason for being there during the Trump Presidency,” Trump wrote in a morning tweet just hours after the Wall Street Journal first reported the news.

The move once again scrambles US policy toward the Middle East, coming as the Trump administration had begun to coalesce around a three-tiered policy for the war in Syria that seeks the lasting defeat of the Islamic State (IS, also known as ISIS), Iran’s withdrawal and an irreversible political settlement backed by the United Nations at talks in Geneva. That process seeks changes to Syria’s constitution and government and possibly President Bashar al-Assad’s ouster.

As recently as this month, US officials were telling Al-Monitor they believed they had unique leverage to bring Russia and Iran, which would soon seek to stop paying Assad’s mounting military bills, to the bargaining table. On Tuesday, UN-brokered talks to convene a new constitutional committee broke down, though the sides promised to resume talks in January.

Former US officials said that while the State and Defense Departments are still likely to try to get Trump to walk back the decision, the damage may have already been done.

“Even if this does get overturned or significantly revised, it does undermine the already limited leverage the US has in Syria,” Frances Brown, a former National Security Council director under both President Barack Obama and Trump, told Al-Monitor. “Today shows that once again, even though the US has the most effective armed forces in the world, the backing of US military force is not all that credible: Our military can be redeployed by a tweet. This will have a chilling effect on other potential US partners who already fear that the US is a fair-weather friend.”

Today’s announcement would also appear to change the administration’s calculus about leverage in the negotiations. Asked how the decision would impact Trump’s hand in UN-led talks, a source close to the US administration told Al-Monitor it “would seem to weaken it.”

The source, speaking on condition of anonymity, indicated that a warning order had gone out to US troops in Syria about the withdrawal, suggesting that the decision still could be reversed. Yet even if the Pentagon and State Department are able to change the president’s mind, experts said the move could irreparably harm the US position in Syria.

“Assad will not give one concession on anything, especially the constitutional committee,” said Randa Slim, a fellow at the Middle East Institute in Washington. “Turkey will gain the upper hand in northern Syria. The question: Will [Turkish President Recep Tayyip] Erdogan go forward with his attack [east of the] Euphrates? If so, what will Damascus’ reaction be? Iran’s?”

The decision and Trump’s assertion that the Islamic State had been defeated also drew immediate criticism from close allies of the president in Congress, where lawmakers of both parties were blindsided by today’s news.

“Withdrawal of this small American force in Syria would be a huge Obama-like mistake,” said Sen. Lindsey Graham, R-S.C. “With all due respect, ISIS is not defeated in Syria, Iraq and after just returning from visiting there — certainly not Afghanistan.”

Over the summer, the Defense Department’s inspector general estimated that IS had 30,000 fighters left in Iraq and Syria, and a Pentagon spokesman said the militant group would emerge from the US-led fighting stronger than al-Qaeda in Iraq at its height.

“The campaign against ISIS is not over,” Pentagon spokeswoman Dana White clarified today. “We have started the process of returning US troops home from Syria as we transition to the next phase of the campaign.”

“For force protection and operational security reasons we will not provide further details,” she added. “We will continue working with our partners and allies to defeat ISIS wherever it operates."

The decision also leaves an uncertain future for the US-backed Syrian Democratic Forces, which have clashed with NATO ally Turkey over ties with Kurdish groups. Testifying to Congress earlier this month, Marine Corps Lt. Gen. Kenneth McKenzie indicated that the Pentagon would hope to integrate the SDF into local security and police forces after the defeat of IS.

But those plans have been threatened by Erdogan, who has promised renewed attacks against the Kurdish forces aligned with the SDF. Trump made his decision to pull out after speaking to Erdogan on Friday, according to Reuters.

In addition to catching lawmakers off guard, the move also appeared to scramble the US administration’s messaging on Syria. At the Pentagon, Defense Secretary Jim Mattis and Vice President Mike Pence ignored shouted questions from reporters. And State Department spokesman Robert Palladino’s briefing, scheduled for 2:30 p.m., was abruptly canceled with just three hours to spare.