Hamas' fingerprints all over wave of terror in West Bank

On the backdrop of the understanding with Israel over Gaza, Hamas is seeking other ways to bolster its image of resistance such as increasing attacks in the West Bank. 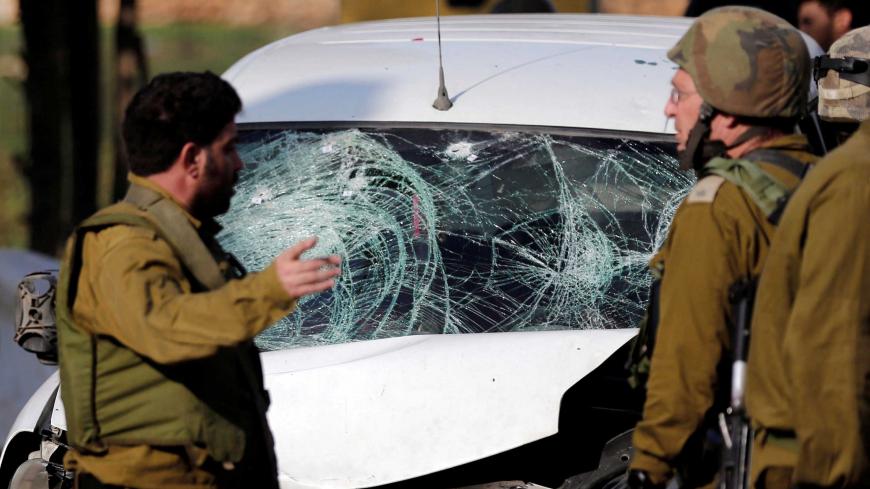 Israeli soldiers inspect the scene of a car attack near Hebron, in the occupied West Bank, Nov. 26, 2018. - REUTERS/Ammar Awad

Shin Bet Director Nadav Argaman made it clear to the Foreign Affairs and Defense Committee last month that the apparent state of calm in the West Bank is nothing more than an illusion. “The situation is very complex,” he explained. “On the surface it appears as if there’s relative calm, but this quiet is deceptive, because beneath the surface tensions are increasingly simmering.” According to Argaman, Hamas is doing everything it can to launch attacks from the West Bank, directing them from Gaza, Turkey and Lebanon. Going in to greater detail, Argaman added, "Over the past year, we were able to thwart 480 terror attacks, including 219 Hamas cells and 590 lone attackers. This is a very large number that is indicative of the terrorism bubbling under the surface."

Just one month later, the West Bank is giving clear indications that we are standing on the threshold of a new wave of violence, with each attack encouraging the next assailant. On Thursday two soldiers were killed in a shooting at the Givat Asaf intersection near the settlement of Ofra, and two others, a soldier and a civilian, were seriously injured. Earlier that day, two border patrol officers were injured in a stabbing attack in the Old City of Jerusalem, while another soldier sustained light injuries in a vehicular attack near the settlement of Kochav Yaakov. Earlier that week, seven people were injured in a shooting at the entrance to the settlement of Ofra. They included Shira Ish-Ran and her husband; Shira Ish-Ran was seven months pregnant. The doctors treating her were forced to perform an emergency delivery, but the baby died four days later.

Since September, there have been 14 attacks and attempted attacks throughout the West Bank and Jerusalem. “This wave of terrorism is not simply the result of the sense of frustration and desperation that Palestinians in the West Bank feel. It also has other, very complicated components and motives,” a senior Israeli security source told Al-Monitor on condition of anonymity.

He says that the first and probably the main reason is that Hamas wants to move the armed conflict from Gaza to the West Bank. As the Shin Bet director said last month, it may be directed most immediately from the Gaza Strip, but the guiding hands are in Turkey and Lebanon. In other words, the fingerprints of the deputy director of the Hamas' political bureau Saleh al-Arouri are all over it.

As far as Hamas is concerned, the escalating conflagration in the West Bank serves the group’s interests. Not only does it silence Palestinians who think that Hamas has folded and abandoned jihad for the sake of Qatar’s monthly handout to Gaza, given with the assent of the “Zionist foe.” It also stems from a deep urge to take revenge on Palestinian President Mahmoud Abbas, who continues to impose sanctions on Gaza.

No matter how one looks at it, the consensus among the Palestinian public is that Israel is keeping Hamas alive and that everything else is a political game. The Hamas leadership may have promised that the Gaza closure will be lifted entirely, but the reality for the moment is different. It is a confusing situation for Hamas, which is expected to sit on the fence, wait for Qatari money and prevent armed or “popular” attacks against Israel. It cannot come to terms with that.

Right after the attack at the Givat Asaf intersection, head of Hamas' political bureau Ismail Haniyeh congratulated the perpetrators and declared, “What happened today in the cities of the West Bank tells us that the situation is starting to change, and that a new chapter in our relationship with the occupier has begun through blood resistance. The blood of [Saleh] Barghouti and [Ashraf] Na’alowa [the attackers in Ofra and Barkan who were killed by the IDF on Dec. 13] is a point of light for future generations.”

The organization’s military wing also hinted at a sense of satisfaction over the front moving from the Palestinians’ soft underbelly, Gaza, to the West Bank: “The enemy will not enjoy security and stability in the West Bank. The fire raging in the West Bank will burn up the occupier, who will sustain blows from the most unexpected places.”

Arouri’s fingerprints in the West Bank are very familiar to the Palestinian security forces. Despite a barrage of criticism, security collaboration with the IDF continues, with a focus on preventing Hamas from establishing new cells and expanding its infrastructure in the West Bank. Given this week’s outbreak of terror, it is worth remembering that Abbas succeeded in stopping the previous wave that broke out in October 2015. He did so through full and effective coordination between the Palestinian security forces and Israel. Abbas even instructed senior Palestinian officials to focus not only on security but also on expanding their activities in educational institutions, devoting several teaching hours to the idea that violence and suicide attacks are not in Palestinians' interest and that diplomatic efforts will ensure the creation of a Palestinian state. While security coordination with Israel continues and has even gotten deeper over the last few weeks, Abbas' claims about a diplomatic horizon achieved through popular means and international diplomacy are no longer realistic. After this week’s series of attacks and the assassination of the perpetrators, Abbas’ office released a statement Dec. 13 denouncing terrorism and explaining the renewal of violence: “The climate created by the policy of repeated raids into cities, incitement against the president and the absence of horizons for peace is what led to this unacceptable series of violence, which we condemn and reject, and for which the two sides are paying the price."

Several factors enable Hamas to win support among large swaths of the West Bank population. They include the lack of a political solution on the horizon and the decline in Abbas’ stature and in his inability to bring about change in the West Bank. And above all else, as Abbas’s office noted, there are the daily IDF operations throughout the territory and the arrests and assassinations of the perpetrators of attacks.

Past experience, particularly from the second intifada, shows that any preventative measures or assassination attempts in the West Bank only lead to the next attack. It is a trap, and there is apparently no way out.

After Barghouti and Na’alowa were killed, hundreds of people took to the streets in the Ramallah area and called on Hamas’ Izz ad-Din al-Qassam Brigades to take revenge. Responsibility for preventing a further round of attacks now lies with Mahmoud Abbas and the IDF. They will have to improve their security coordination, but even that may not be enough to stop the conflagration from spreading.