The unlikely war between Iran, Hezbollah and Israel

Despite increasingly tough rhetoric and the launch of an operation along the border with Lebanon, Israel is unlikely to enter all-out war against Iran and its regional allies. 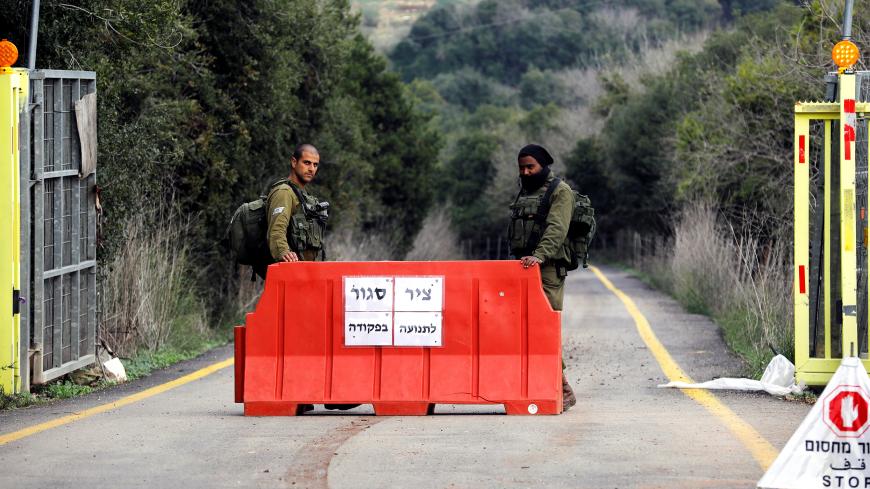 Israeli soldiers stand guard at a checkpoint on a road leading to the border between Israel and Lebanon, on the Israeli side of the border, Dec. 9, 2018. - REUTERS/Amir Cohen

The more the tension rises between Israel and its regional foes Iran and Hezbollah, the more the talk of war becomes louder. This dynamic has been at play for years; as each side gains more power, the greater the public fear of war. Yet the possibility of a real war occurring keeps falling despite all the hot air.

Since Dec. 4, the world has been following Israel’s Operation Northern Shield on its border with Lebanon. The operation, according to Israeli officials, is aimed at uncovering and destroying Hezbollah’s network of tunnels that reach into Israel. Briefing foreign ambassadors Dec. 6, Israeli Prime Minister Benjamin Netanyahu said Hezbollah seeks to send “entire battalions” into his country — including via the tunnels Israel is now tackling — in order to seize land and to kidnap and kill Israelis.

A few days earlier, on Dec. 3, Netanyahu and the Mossad chief met with US Secretary of State Mike Pompeo in Brussels. The Israeli prime minister was reported to have told Pompeo that Israel could take military action if Beirut does not clamp down on Hezbollah, as Israel is concerned that Tehran has begun shipping advanced arms directly to Hezbollah in Lebanon rather than through Syria.

Despite the Israeli rhetoric, Iran and Hezbollah have kept silent over the accusations and the operation. Indeed, only a few days prior to the beginning of Northern Shield, Hezbollah had issued a video showing aerial footage of vital Israeli facilities, including the Ministry of Defense, accompanied with a message in Hebrew reading, “If you dare attack, you will regret it.” The video emerged after it had been reported that there had been a Nov. 29 strike by Israeli planes on positions in Syria thought to be controlled by Iran and Hezbollah. Such a strike would have been the first since mid-September, when Syrian air defenses downed a Russian military plane during an Israeli airstrike, prompting Moscow to provide Syria with its advanced S-300 missile defense system.

However, an Iranian field commander told Al-Monitor on condition of anonymity, “There was no [Nov. 29] strike on our bases in Syria. There have been no strikes in Syria since September. The fact of the matter is that a false alarm caused the Syria anti-aircraft defense systems to operate sporadically.” The source confirmed what a senior Hezbollah source told Reuters on Dec. 3, “Iranian and Hezbollah positions in Kiswah, in southern Syria, were not exposed to any bombardment.”

The Iranian commander said, “Israel’s attempt to spread fake news by claiming that Iran is transferring its strategic weight from Syria to Lebanon is funny. Hezbollah’s capabilities in Lebanon have been there for years, and whatever is needed to defend Lebanon against Israeli aggression is in the hands of Hezbollah — nothing has changed.” The commander said Israeli officials used to justify their strikes in Syria by saying they are aimed “at preventing the resistance [Hezbollah] from acquiring game-changing weapons and delivering them to the front in south Lebanon. Now that they know that all their efforts failed, they are trying to divert attention from their failure in Syria to new allegations against Lebanon. Israel well knows that it’s not capable of launching a war.”

Hosam Matar, author of “The soft power war between the US and Hezbollah,” said all parties recognize the enormous price of any future war in the region. He told Al-Monitor, “The implications of such a war can’t be compared to any previous war. This makes the choice of war, with the uncertainty of a decisive or clear victory, an irrational choice.”

Matar said the “resistance axis succeeded in transforming the threat for the Israeli internal front from a minor one to a broad and comprehensive one, placing it high within the Israeli calculations of future war.” He said this puts pressure on Israel, “which lacks a vital geographical depth, to avoid anything that might lead to war. In this sense, Israel lost the ability of [having] the strategic initiative to launch a large-scale war outside its territory and tried to compensate for it with an ‘ongoing deterrence,’ i.e., tactical action to prevent its opponents from accumulating power or preventing them from attacking it.”

In the current situation, given Iran's and Hezbollah’s presence in Syria and the apparent outcome of the war there — namely the advances of the Syrian government — it appears that any future war won’t be fought within either the borders of Lebanon or Syria, Syrian journalist Rida al-Basha told Al-Monitor. Basha, who has covered the Iranian role in the Syrian war for the past four years, said, “From Aleppo to the countryside of Hama, and the countryside of Homs to that of Damascus, these areas are a concern for Israel. They constitute areas in which the Syrian army operates — alongside Hezbollah and Iran — and there are also forces that were trained by the resistance axis.” Basha said more than 15,000 Syrian troops have been trained at the highest levels and with modern weapons, such as anti-aircraft and guided missiles, adding, “They fought in different battles, some with air cover and others without. I personally saw these forces on the ground in the battles, and they showed a high combat capability of infiltration and break-in [penetration] or defense and they are compared in efficiency to Hezbollah’s Radwan Force, or even the Iranian [Islamic] Revolutionary Guards [Corps],” or IRGC. Basha said these forces will likely be part of any future war from the Syrian side. He said this force is known as the Qasem force, in reference to the commander of Iran’s Quds Force, the foreign operations branch of the IRGC, Maj. Gen. Qasem Soleimani.

The level of deterrence on the borders along with the wide potential area of confrontation between Iran and its allies on one side and Israel on the other makes a future war unlikely. Indeed, this is due to the fact that such a war will probably draw in other parties, which could make it a regional confrontation that no one in the world would want to see.