Ayla Albayrak won an appeal against a 2017 terror conviction for reporting on the Kurdish insurgency for the Wall Street Journal, but she doubts the court was motivated by concern for press freedom. 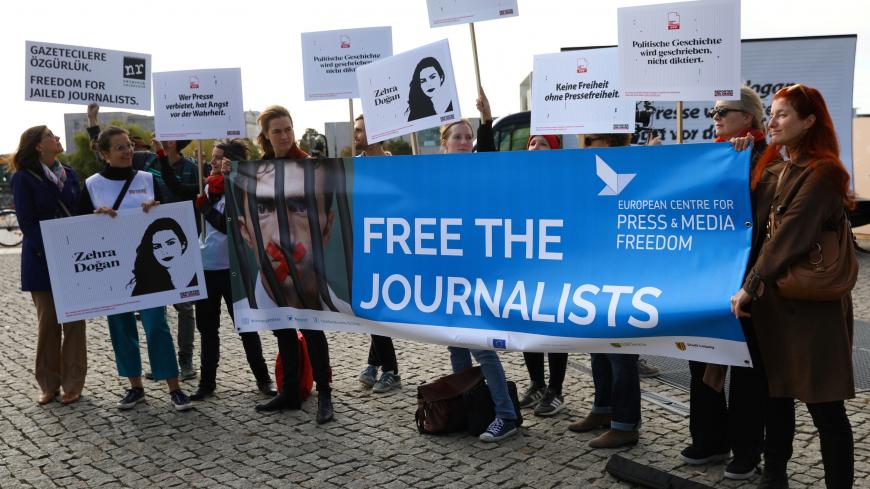 People hold placards prepared by Reporters Without Borders as they attend a demonstration organized for journalists detained in Turkey in front of the Berlin's main railway station during the Turkish president's visit in Berlin, Germany, Sept. 28, 2018. - REUTERS/Christian Mang

ISTANBUL — A Turkish court has overturned a conviction against a former Wall Street Journal reporter in a rare victory for the country’s beleaguered press, boosting hopes the government would relax its clampdown on the media as it seeks to repair relations with Western allies.

Journalist Ayla Albayrak won her appeal on Tuesday against a verdict handed down last year that she had disseminated terrorist propaganda by writing a story about clashes between the military and Kurdish militants in southeastern Turkey in 2015. She faced two years and one month in prison, but was free pending the appeal.

The higher court cited procedural reasons, including the statute of limitations, in its decision, and the prosecutor now has two weeks to appeal, according to the Wall Street Journal.

The ruling offers a sliver of hope to the hundreds of journalists in Turkey prosecuted in connection with their reporting. About 150 of them are behind bars, according to Human Rights Watch, making Turkey the world’s biggest jailer of journalists.

Turkey’s critical press has been decimated under a wider crackdown on President Recep Tayyip Erdogan’s opponents in the wake of a failed military coup in 2016. Dozens of newspapers, radio stations and television channels were banned, with Kurdish journalists disproportionately affected. Owners of large media companies that questioned government policy have been pushed out, and the sector’s consolidation means that 90% of news organizations are directly or indirectly controlled by the government, Reporters Without Borders says.

The Paris-based group ranks Turkey 157th out of 180 countries in its World Press Freedom Index, and a broader erosion of human rights in Turkey after the coup attempt — including the jailing of politicians and activists, purges of the civil service and reports of torture — have drawn censure from Europe. Erdogan has also faced complaints that he has used criminal prosecutions against foreign nationals or Turks working for foreign organizations to exact concessions from Western governments.

Now he is seeking to galvanize international pressure on his rival, the crown prince of Saudi Arabia, over the slaying of Jamal Khashoggi, a Saudi journalist with close ties to the Turkish government who was killed in a premeditated attack at his country’s consulate in Istanbul last month. Prosecuting Turkey’s journalists while decrying the brutal attack on another taints the crusade for justice for Khashoggi, rights groups have said.

Albrayak expressed relief over the decision in her case, as well as concern for the plight of other journalists who have been jailed.

“Unfortunately, the case was not dismissed to advance press freedom in Turkey but on procedural grounds. As a journalist in Turkey we’ve seen a lot, and I was lucky in so many ways compared to those in prison, but I’m sorry that my family had to go through this unnecessarily,” she told Al-Monitor.

Tunca Ogreten faces a combined 24 years in prison in two separate trials for allegedly insulting Erdogan and revealing state secrets by reporting on the contents of hacked emails of the leader’s son-in-law, Berat Albayrak, who is his finance minister.

“I believe there is a softening underway in Turkey, but this doesn’t apply to everyone. If you’re a reporter for a Western outlet or if you have no political engagements, then you may benefit. If you’re a Kurdish journalist … you will not,” said Ogreten, who spent a year in prison, including 24 days in detention in a small police cell under harsh conditions.

“I have no hope in the judicial process working” because the legal system remains under the sway of the government, he told Al-Monitor. He pointed to comments this week from Erdogan in which he said members of the judiciary must remain steadfast to the state.

“We already see judges and prosecutors as his, and if this isn’t enough, it means things could get worse,” said Ogreten, who returns to court in January for the next hearings in his trials.

A Wall Street Journal editorial hailed the ruling in Albayrak’s case as “good news for the cause of press freedom,” but noted that it fails to remedy “the many other Turkish offenses against a free press.”

Albayrak, a seasoned reporter who covered the Syrian conflict, the ensuing refugee crisis and Kurdish issues, was charged in connection with a story about fighting between security forces and supporters of the Kurdistan Workers Party, an armed group that has waged a three-decade insurgency and is listed as a terrorist organization by Turkey, the United States and the European Union.

She left her home in Turkey during the trial and parted ways with the Wall Street Journal in July. Editor-in-chief Matt Murray described her “unwavering bravery and grace … throughout this long and painful ordeal.” Albayrak “was convicted for honest, objective and irrefutable reporting. In other words, the kind of work that all of us strive to produce every day,” he said in a statement.

Ogreten returned to work four days after walking out of prison and now writes for the independent portal Diken and the German newspaper Tageszeitung and hosts a weekly political podcast.

“If journalism’s main mission is to reveal the truth, then this is the most important time to be a journalist in Turkey. What matters is doing your job during difficult times,” he said, even as the fear he could return to prison for his work haunts him.

“When there is a late-night knock on the door, I always think they are coming to get me again,” he said.