Millions of Palestinians no longer eligible for Saudi visas

A Saudi decision to deny visas to people holding temporary passports but without national identification numbers means that millions of Palestinian Muslims in Israel, Jordan and Lebanon will not be able to perform religious rites at Islamic holy sites in the kingdom. 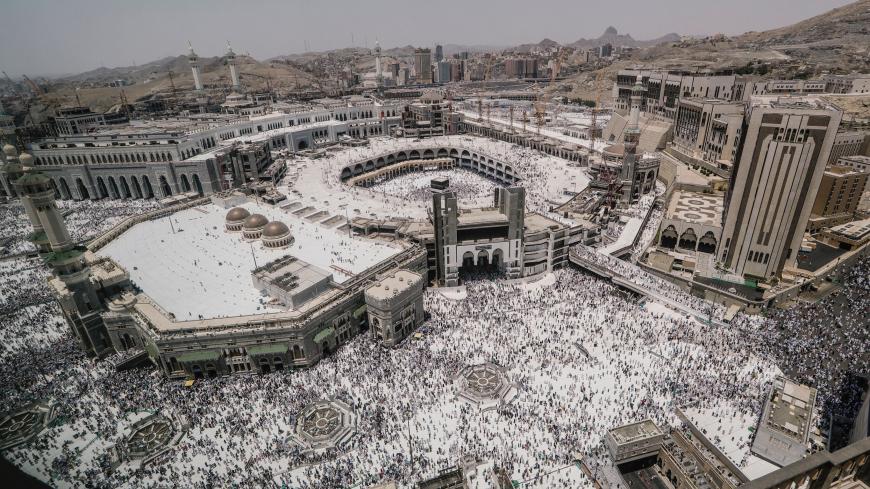 Muslim pilgrims walk out after the Friday prayer at the Grand mosque ahead of the annual hajj pilgrimage in the holy city of Mecca, Saudi Arabia, Aug. 17, 2018. - REUTERS/Zohra Bensemra

An unannounced policy by the Saudi government has made millions of Palestinians unable to travel to Saudi Arabia for the hajj, umrah (the non-mandatory, lesser pilgrimage) or work. Over the past two months, Saudi consular officials have informed Jordanian travel agencies servicing hajj and umrah tourism that the kingdom will no longer accept visa applications for individuals with temporary travel documents.

The decision affects hundreds of thousands of Palestinians living in Jerusalem, Egypt, Lebanon and Jordan who have temporary passports but no national identification numbers. Al-Monitor viewed text messages from Saudi consular officials based in Amman, Jordan, to travel agents instructing them not to submit applications from persons with temporary documents. Saudi officials in Amman have refused comment on the issue to the media.

Kamal Abu Diab, secretary of the Jordan Society of Tourism and Travel Agents, told Al-Monitor that he had been told by the Saudis to inform all travel agents not to submit applications from individuals who are not full citizens of an Arab country and who do not have a legitimate national ID number.

“We informed the Ministry of Islamic Waqf and the Foreign Ministry, which have been working hard to resolve this problem,” Abu Diab said, adding that the ban affects some 200 travel agencies that have worked with Palestinians in Jordan, Jerusalem and Israel.

Yahya Abu Amor owns Al-Tawasol, a Jerash-based company that provides services to members of the large community of Palestinians of Gaza origin who live in that district north of Amman. “There are 160,000 Palestinians holding Jordanian passports without a national ID whom we work with,” said Abu Amor, who also noted that some 5,000 Palestinians from Jordan typically took part in the hajj and umrah annually, but no longer can. “Just after the hajj season was over in August, we were told not to include any person without a national ID in the umrah season, which began Oct. 15.”

The umrah season normally begins at the end of the hajj season. In 2018, the hajj ended Aug. 21, with the celebration of Eid al-Adha.

A Jerusalem resident who requested anonymity for fear of retribution told Al-Monitor that after six rounds of interviews with a leading French company, he had landed a senior-level position in Saudi Arabia in March. He was able to work there for a while, but since September, he has been unable to obtain a visa to return to Saudi Arabia because he has a temporary Jordanian passport without a national ID number. He said there are thousands of Jerusalemites like him, stuck in a legal limbo waiting for a change in policy to allow them to return to their jobs.

The Jordanian government has shifted into high gear to try to resolve the problem. A high-level delegation from the Islamic Waqf and Foreign ministries flew to Saudi Arabia on Nov. 4 for talks, said Jordan's waqf minister, Abdel Naser Abu Basel, but the matter remains unresolved.

Jordan has since stepped up its protest by going public about the issue. “Eye on Jerusalem,” a weekly program on Jordan TV, dedicated its Nov. 12 broadcast to the Saudi policy.

Appearing on the show, Yehia Sud, head of the Palestinian Affairs Committee in the Jordanian parliament, said the Saudi decision affects nearly 4 million Palestinians and questioned the political motivation behind the decisions. He said that by denying Palestinians visas, the Saudis were pushing those in Jerusalem to apply for Israeli citizenship and for Palestinian refugees in Jordan to be permanently settled in the Hashemite kingdom.

Appearing on the same program, Talab Abu Arar, an Israeli Knesset member from the predominantly Arab Joint List, said the policy takes Palestinian citizens of Israel back to the time when their religious rights were denied. He said that between 1948 and 1978, they were not allowed to travel to perform the hajj. In coordination with Saudi Arabia and after obtaining approval from the Arab League, Jordan's King Hussein provided Muslims of Israel with temporary passports in 1978, Abu Arar said. Nearly 2 million Palestinian citizens of Israel were thus able to make the hajj or umrah that year.

Abu Arar, who belongs to the Islamic Movement in Israel, said he believes the decision aims at forcing Israeli Muslims to fly directly from Ben Gurion International Airport to Saudi Arabia using their Israeli passports rather than traveling by land and using temporary Jordanian passports. Haaretz had reported in July 2017 on the idea of Muslims in Israel traveling directly to Saudi Arabia by plane from Ben Gurion. Information about the current Saudi visa ban began to trickle out in late August, shortly after the end of the hajj season.

The unilateral decision of the Saudi government must be addressed both bilaterally between Jordan and Saudi Arabia as well as multilaterally, within the context of the Arab League, to resolve pan-Arab issues, especially those that deal with Palestine.