South Israel rages at Netanyahu as Liberman bows out

Residents of Israel's southern communities are furious with Prime Minister Benjamin Netanyahu for failing to respond to Hamas' recent rocket fire with an operation in Gaza, and his defense minister's resignation has left him alone with the blame. 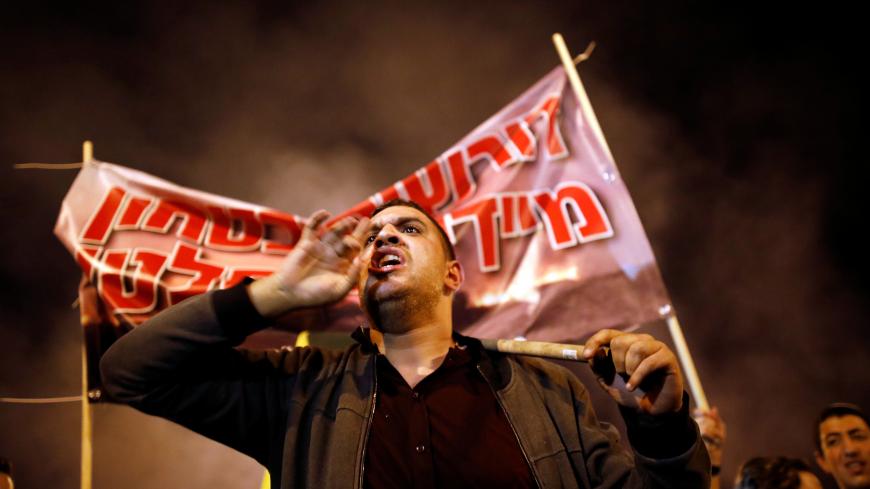 After a long, tumultuous night of protests in his town, Sderot mayor Alon Davidi stood before the cameras the morning of Nov. 14 and tried to relay how frustrated he felt about the cease-fire with Hamas reached the night before. Davidi is no hothead. He identifies with the right and maintains close ties with quite a few members of the government. Nevertheless, his message was clear. He was disappointed with a government that left the people of his town hostages of Hamas. “I have a lot of respect for the government, but in this case, it is wrong,” he told Keshet’s morning show. “Hamas needs to receive a devastating blow … It is a terrorist government and its people should be targeted.”

Like all residents of the south, Davidi expected Hamas' audacious attack, in which almost 500 rockets were fired in 48 hours, to result in a devastating counter-attack. He and the people of his town were prepared to spend many long days and nights in their protected spaces. But then on Tuesday night, they learned that Prime Minister Benjamin Netanyahu and members of his cabinet had negotiated a cease-fire.

It was a repeat of what happened after the brief round of fighting in August. Once again, Israelis, particularly residents of the south, first heard the news from the media. The prime minister did not bother to make a public statement, nor did any member of his security cabinet. They were not prepared to explain their decision.

The residents of Sderot responded to the news with a spontaneous demonstration at the main intersection leading into their town. After two long days, they felt neglected, and for good reason. They chanted against the government, with Netanyahu bearing the brunt of their attacks. “Wake up!” they called, and there were even chants of “Bibi go home!” and “We deserve to give our children a normal childhood!” The fact that most people in Sderot identify with the right and that the town is considered a bastion of the Likud only underscored the intensity of their frustration and disappointment with the most right-wing government in Israel’s history. The demonstrations continued into Wednesday and are planned to continue outside the government’s offices such as the Defense Ministry in Tel Aviv.

It is too early to tell how the protest in the south will impact the country’s political leadership, particularly the prime minister. No one expects Israel to launch an operation in Gaza as a result of these demonstrations. The protests are intended to put pressure on the government before the next round of fighting — and there will be a next round, sooner or later.

Some sources claim that the protests were one of the reasons that prompted Avigdor Liberman’s resignation from his position as minister of defense. Even if not, the protests certainly influenced his decision indirectly. Liberman visited the south frequently over the last few months. He was in constant contact with the local residents and could feel their disappointment. He also knew how the situation could affect his public standing, or in more practical terms, how it might affect him electorally. At the Nov. 14 press conference in which he announced his resignation, Liberman made a point of speaking about the residents of the south, saying that had he continued as defense minister, he would no longer be able to look them in the eyes.

Even if this move doesn’t win Liberman any votes, he was nonetheless able to divert the fire from himself. Furthermore, the drama surrounding his resignation validated the protests, with the defense minister himself calling the government’s policy “weakness.”

There is another side to Liberman’s resignation. It also leaves Netanyahu on his own to face the public outrage. As long as Liberman stood shoulder to shoulder with him in the campaign against Gaza, it was Liberman who came under fire most and who was subjected to the most ridicule. The man who promised to assassinate Hamas leader Ismail Haniyeh within 48 hours of his appointment as defense minister if Hamas did not return the bodies of Israeli soldiers was sucked into a policy of containment and restraint, even in the face of many long months of terrorism from Gaza.

Now Netanyahu stands all alone on the front, exposed to public criticism and southern rage. People will demand answers from him and him alone. Netanyahu was in charge of government policy for the past nine years, including its policy toward Gaza. After Operation Protective Edge, Netanyahu promised that he would open new doors to the Arab world to stabilize the region and find a diplomatic solution to the Gaza problem. Four years later, Gaza was once again playing a major role in the lives of Israelis in the south while Netanyahu made Palestinian President Mahmoud Abbas irrelevant. It was also during his watch that Qatar began to funnel money into Gaza, sending $15 million in cash directly to Hamas.

As a result, the protests of the local residents have a single, clear target. But the question put to Netanyahu should not be why didn’t he lead Israel into another operation in Gaza, but why did he waste four years without striving to reach a diplomatic solution and without taking advantage of Israel’s achievements in Protective Edge and the quiet that followed to create a new reality along the Gaza border?

Netanyahu fully realizes that he is publicly vulnerable, and that the recent Gaza saga could become a major issue in the next election. It will certainly be Liberman’s banner issue. By the time rumors of Liberman’s resignation began to spread on Wednesday, Netanyahu was participating in the annual memorial to Israel’s first prime minister, David Ben Gurion. In an attempt to reduce the political damage, he strongly suggested there that there were certain factors that he could not reveal: “Leadership also means standing up to criticism when you know things that are classified and which you cannot share with the public that you love,” he told residents of the south.

The News Company conducted a poll immediately after Liberman’s resignation and released its findings on Wednesday night: Netanyahu does have reason to worry. The poll gave the Likud a record-low 29 seats (compared with 35 only a few months ago), while Liberman got a little stronger with seven seats. Surely Netanyahu hopes that this decline in support is a fleeting sentiment.