As Turkey's hunt for the Kurdish resistance group claims victims who have no ties to or sympathy for the Kurdistan Workers Party, locals hope a new border post protected by peshmerga can establish security and end the bombing of innocent villagers. 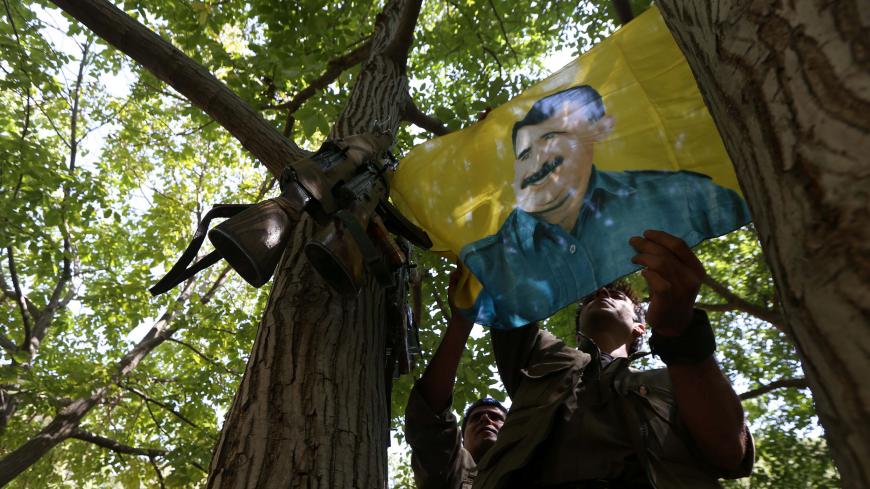 A member of the anti-Iranian group the Kurdistan Free Life Party hangs up a flag of jailed Kurdistan Workers Party leader Abdullah Ocalan at their base deep on the Iraq-Iran border of northern Iraq's Kurdish autonomous region, Aug. 28, 2017. - SAFIN HAMED/AFP/Getty Images

It’s mainly mud on what is to become the road to the new border post between the Iraqi Kurdistan Region and Turkey, only the second one for general use through the mountain ranges dividing the two. Cows amble by without a shepherd; a truck leaves a fresh trail.

“Before, you could not walk here without being shot at,” says Kak Salah, a commander serving with the Iraqi Kurdish security forces in the border region. He comes to a halt and will go no further, pointing to the peak of the highest mountain in front of us. “The Turks watch us from up there. If you [went further] looking for your cow, they would shoot. Today might be your lucky day, or it might not.”

This muddy path is set to open the Kurdish mountain area of Mergasor for business and tourism from Turkey. But it's in the middle of an area where the Kurdistan Workers Party (PKK), the Kurdish resistance group from Turkey, is active. The workers building the road are being protected by Iraqi-Kurdish peshmerga fighters. The PKK does not want a road that can be used by the Turkish army to hunt down its fighters.

Turkey and the PKK have been locked in a civil war for years, with thousands of victims. Under the protection of one of the Iraqi Kurdish parties, the group can still operate from across the border from its bases in the Qandil mountains. The sound of a plane is heard from high in the sky above, on its way to offload its bombs there.

Since the cease-fire between Ankara and the PKK ended in 2015, the Turks bombs these mountains almost daily. But the PKK has hidden underground and stays put. That is why the Turks have extended the fight into an area where most Iraqi Kurds do not support the PKK. The result is a long strip of no man’s land with dozens of empty villages abandoned because of the frequent rockets and mortars.

Nearby, Sherwan village is still inhabited, although it also lies in the firing line. Recently, a Turkish rocket destroyed a wall outside a school. Peshmerga member Hadi Ibrahim points out the holes in the school walls. “Two rockets just missed the football field where children were playing. We have had four hits in the past 20 days. It can happen any time.”

Whether the rockets were meant for the village or just missed their target, he does not know. “We are all Kurds. Turkey does not make any distinction between the PKK and us,” he says, adding that he is unhappy about the PKK activities in the area. “But we cannot do anything about it.”

Standing beside a recent crater on his land, Radwan Faris says that no one really sees the PKK fighters come and go, but he still blames them for the danger his village is in. “The PKK wants people to leave the villages so they can use them,” he says. “They do not care about us.”

A woman in black arrives with her two daughters for the Friday meal with her family. Fatima Mustafa says she is considering leaving, but does not know where to go. “This is our home,” she stresses, “but over 20 families have left over the past two years.”

She points out that the new border post could also be used by the Turkish army to hunt the PKK on the ground here in Iraqi Kurdistan, but Salah thinks the peshmerga troops will guard the road to ensure safety.

The villagers have lost hope, the woman says. They have even contacted the ruling Barzani family: “We called them to find a solution. They promised to talk to the Turks. The shooting stopped for three days, but then it started up again.”

Under Barzani's leadership, the Kurdistan Regional Government built close ties with Ankara, which helped out with hundreds of millions of dollars when low oil prices and the war against the Islamic State led to a financial crisis in the Kurdistan Region. Its dependency on Turkey is enormous, as it also supplies the region with fruit, vegetables and other food, and recently the KRG announced it will open a representative office in Ankara.

Relations between the Barzanis and the PKK have not been good at all since the two clashed during the Kurdish civil war in the 1990s. More recently, the two competed for power in Syria’s Kurdish territories where the PKK’s sister organization, the Democratic Union Party (PYD), rules a de facto autonomous region.

The Barzanis have generally turned a blind eye to Turkish attacks in the Kurdistan Region, but now the fight has reached their door. The family’s ancestral home, the village of Barzan, is part of the affected area. There, 18 out of 72 villages have been abandoned. The head of the subdistrict of Mergasor, Govan Rashid Mustafa, says that some 260 families have left over the past two years. The result is a no man's land where anything that moves risks getting shot at. Three villages have been taken over by the Turkish army. Further to the east, in the Badrost district, 20 villages have been occupied by the Turks.

“We told the PKK that we are now the victims of their actions,” Rashid says. “They do not care.”

Turkey's air attacks are also hitting targets that have no connection to the PKK at all. An attack outside the town of Amedi killed three farmers who were having lunch together, and still further west, near Zakho, an attack on picnicking Kurds caused panic and anger.

Salah says that Turkey is trying to stir up a civil war by hitting the Barzanis in their own backyard. “Let the PKK keep to its own territory,” he demands angrily. Subdistrict head Rashid Mustafa wonders if the PKK really cares about the Kurdish cause. “They only want destruction,” he fumes.

The Kurdistan government finds itself facing a painful dilemma: It cannot condemn the attacks in strong terms because it needs the Turks. But at the same time, it shares the dream of independence for all Kurds in Iraq, Iran, Syria and Turkey. Only Baghdad has condemned the Turkish actions from time to time, because the region is Iraqi territory.

These dangerous developments along the Iraqi-Turkish border do not receive the same media coverage as Turkey’s battle in Syria against the PYD. Ankara is now increasing pressure on all Iraqi Kurds to reject the PKK. As a result, Kurdistan’s second party, the Patriotic Union of Kurdistan, which allows the PKK to use Qandil, has ordered the group to close its offices in the town of Sulaimaniyah.

Given the lack of infrastructure on the KRG side, the new border post can serve no commercial use. Rashid Mustafa hopes that it will end the attacks. “We hope the PKK will reduce its activities when the post opens, and that people will return to their villages. That will bring stability to our region.”