Intel: How Russia, Iran are facilitating illicit oil shipments to Syria (according to the US) 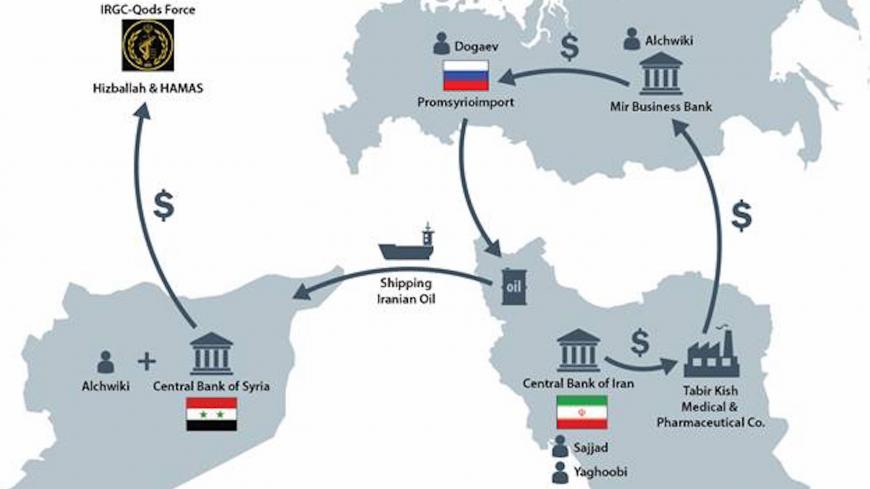 A graphic produced by the US Treasury Department depicts the alleged oil smuggling network. -

The Donald Trump administration today announced sanctions on individuals and businesses it accuses of participating in an illicit Iranian-Russian scheme to smuggle oil to Syria. The scheme allegedly provides millions of barrels of oil to Syria’s Bashar al-Assad government in defiance of US sanctions.

“Today we are acting against a complex scheme Iran and Russia have used to bolster the Assad regime and generate funds for Iranian malign activity,” Treasury Secretary Steve Mnuchin said in a statement announcing the sanctions on nine individuals and companies.

The statement goes on to issue an explicit warning to shipping companies around the world.

“We are issuing an advisory today identifying the grave risks to the maritime community if they participate in shipping oil to the government of Syria,” Mnuchin said.

Why it matters: The crackdown on the oil smuggling network comes after the United States reimposed sweeping oil sanctions on Iran earlier this month following President Trump’s withdrawal from the nuclear deal. The Trump administration has repeatedly vowed to aggressively pursue sanctions evaders. The United States hopes to discourage international investment in Iran as part of its maximum pressure strategy.

The scheme: According to the Treasury Department, Iran’s central bank pays for Syria’s illicit Russian oil imports by concealing payments from the Tadbir Kish Medical and Pharmaceutical Company. Syrian national Mohammad Amer Alchwiki then remits the payments to Moscow via his Russia-based Global Vision Group. Russian oil tankers have allegedly turned off their tracking devices since 2014 to obfuscate their clandestine shipments to Syria.

A Treasury Department press release also calls Alchwiki “a critical conduit” for the transfer of hundreds of millions of dollars for Hezbollah and Hamas.

“This network is a quintessential example of why we so often warn about the risks of doing business with Iran,” a senior administration official said on a White House press call.

But the Trump administration lays the blame squarely on Tehran.

“This is now incumbent upon the Iranian regime to stop engaging in these kinds of deceptive practices that make it difficult for companies and financial institutions to know and understand who it is in Iran that they’re doing business with,” the senior administration official told Al-Monitor on the White House call.

What’s next? With the Trump administration eager to maximize economic pressure on Iran, more sanctions on Iranian individuals and companies are likely in the pipeline.

Know more: In addition to the US sanctions on Iran’s oil industry, the Treasury Department has announced multiple targeted sanctions on Iran and its proxies — including the Islamic Revolutionary Guard Corps’ (IRGC) Basij militia, IRGC-supported members of the Afghan Taliban as well as Hezbollah and Hamas officials. Plus, Al-Monitor’s Barbara Slavin explains how US sanctions have exacerbated Iran’s medicine shortage.