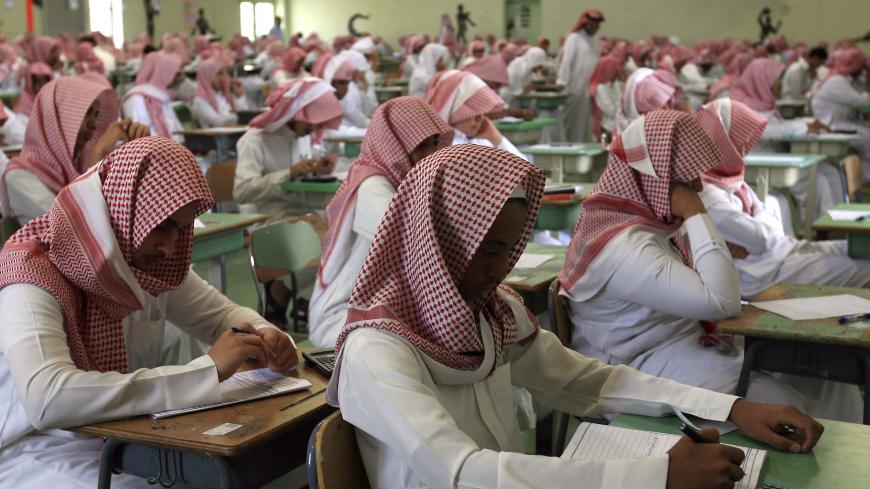 Secondary students sit for an exam in a government school in Riyadh, June 15, 2008. Tens of thousands of Saudi students from elementary, middle and high schools have started their one-week midterm exams. - REUTERS/Fahad Shadeed (SAUDI ARABIA)

The independent federal government commission contracted a study of 22 textbooks focusing mostly on religious studies published by the Saudi government for the 2017-2018 academic year. It notably found that the books “caution students to avoid friendship with members of other religions […] encourage both violent and non-violent jihad against non-believers [and] espouse the death penalty for women who have an affair, and for gay men.”

“This review revealed an apparent reversal in the previous trend toward tolerance in Saudi textbooks,” the commission concludes. “They reflect core Wahhabi doctrines and not other trends of Islamic scholarship that are more accepting.”

Why it matters: The report comes as Saudi Arabia’s reputation is already reeling in the United States and around the world following the murder of Saudi journalist Jamal Khashoggi. It is especially damaging to Crown Prince Mohammed bin Salman and the multimillion-dollar public relations campaign touting him as a progressive reformer championing a vision of a modern Saudi Arabia by 2030. The Anti-Defamation League, which combats attacks against the Jewish people, released a similar report last week that found that “intolerant language of all kinds still abounds in Saudi Arabia’s government-published textbooks for schoolchildren. The incitement is particularly egregious at the high school level.”

The Salafis strike back: While the US commission does not provide a definitive conclusion for the reasons behind the alleged backsliding, speculation is rife that horse-trading between the royal family and traditional clerics over reforms such as lifting the ban on women driving may have played a role.

“What’s most troubling here is that we’re seeing some backtracking in the education system where they had made progress, which we had verified over the years, in terms of cleaning up some of the worst passages in the textbooks,” said Dwight Bashir, the commission’s director of research and policy. “In the midst of other forward-leaning reforms in the past couple of years, to see some backsliding in an area that is tightly monitored … by the religious establishment, there might be an element there of some trading.”

The Saudi Embassy in Washington did not respond to a request for comment.

What’s next: The report will now be shared with members of Congress as well as the White House and State Department to figure out how to respond. Lawmakers of both parties have been increasingly vocal about pushing back against President Donald Trump’s desire to move past the Khashoggi affair, with no fewer than three Republican senators — Joni Ernst of Iowa, Mike Lee of Utah and Ben Sasse of Nebraska — urging a tougher response on this Sunday’s political shows.