Riyad Saidam, an actor and playwright, has just launched a drama school in the Gaza Strip, a dream he has had since the mid-1980s. 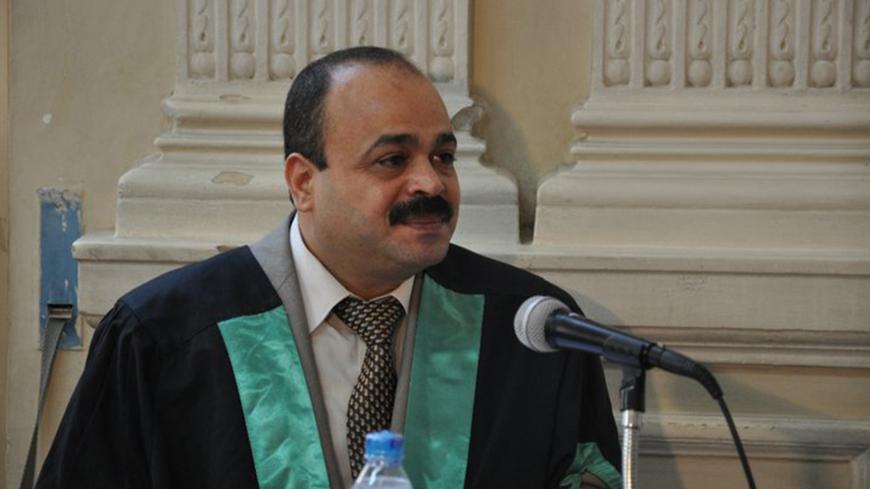 Riyad Saidam, dean of the professional diploma programs at Gaza University, has founded the theater program, which is set to launch at the beginning of November. Posted Feb. 12, 2011. - Facebook/riyad.saidam

GAZA CITY, Gaza Strip — Gaza University in Gaza City will offer a one-year theater program starting at the beginning of November, but few students have signed up for Gaza’s first academic drama program.

The theater program is the brainchild of Riyad Saidam, a former actor and the dean of professional diploma programs at Gaza University. He told Al-Monitor that the idea of an academic drama program came to him during his days as an actor in the mid-1980s. Back then, the Palestinian National Theater in Jerusalem — known as El-Hakawati Theater — as well as theater groups affiliated with Birzeit University in Ramallah and An-Najah University in Nablus performed regularly in university theaters. Actors from the Gaza Strip, which did not have any drama schools or theater halls, were forced to join their counterparts in the West Bank so that they, too, could perform at universities and El-Hakawati Theater.

As soon as Saidam became dean in early 2018, he sought to establish a diploma program where professional actors would teach students drama and help them produce an end-of-term play.

Despite high expectations from media and artistic circles, the initial interest has been low. The program will continue to enroll students after courses have started, but, for the time being, there are only 10 students. All of them are men.

Saidam attributed the lack of enrollment to simple economics. “People cannot live off acting in the Gaza Strip. Salaries of theater actors in Gaza hardly cover transportation costs to the theaters where they perform. Most plays performed in theaters — such as the Palestine Red Crescent Society Theater, Said Al-Mishal Cultural Center and the Theater Days Productions Theater — are subsidized or funded by international organizations. Tickets are sold at nominal prices to encourage the public,” he said.

He noted the program will run, despite the low number of students enrolled. “We will pursue the program even with less than 10 people. This [one-year program] may be the first step of a two-year specialization program and then a four-year bachelor’s degree. But it all depends on the results of the program,” he said.

The program is divided into three semesters with 12 hours of academic sessions per semester. The practical sessions will focus on writing, directing and performing a play at the end of the one-year term. This, according to Saidam and the program’s other teachers, would attract more students and eventually garner funding from the Ministry of Education and Higher Education, as well as local and international groups working on theater, arts and culture.

Yusri al-Ghoul al-Maghari, an actor with 30 years theater experience and a doctoral degree in drama from the University of Gdansk in Poland, has helped develop the program and will teach some of the courses.

He told Al-Monitor that the six teachers in the program are professional actors, some of whom have acting degrees from Egyptian universities and international acting institutes. He noted that a conference hall at the university, which can accommodate up to 200 spectators, will serve as a theater for students enrolled in the program to practice and perform.

“We need to teach drama in Gaza,” Maghari said. “The past three years have witnessed the revitalization of TV and theater acting in the Gaza Strip amid increasing international support provided by nongovernmental organizations."

Ziad Nasr, a member of a small theater group that performs in schools, has enrolled in the theater program. He told Al-Monitor that he discovered his passion for theater when he started attending pre-wedding parties where amateur theater groups or friends perform shows and sing popular and traditional songs.

However, he noted that his poor high school grade point average and his family’s financial situation prevented him from attending theater school in Egypt. So instead, he joined a theater group that performs in schools. When he heard about the theater program at Gaza University, he enrolled right away.

“All I want right now is to train with professional actors who have an academic degree. I want to work on my acting skills and achieve my goal of becoming a lead actor in Arab productions in the next 10 years,” he concluded.