An EU-sponsored project called "My Green Jerusalem" has students from nine East Jerusalem schools cleaning up the city and recycling waste into artwork. 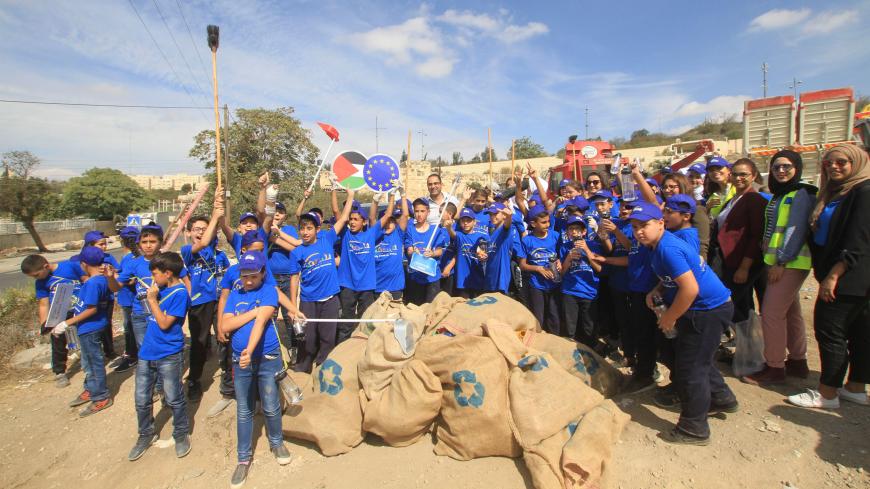 Palestinian students take part in a project to clean up East Jerusalem. - My Green Jerusalem/EEAS

RAMALLAH, West Bank — Students from nine Palestinian schools in East Jerusalem are preparing for the final phase of an EU-sponsored initiative in which they will compete with their art projects made out of recycled garbage.

As part of “My Green Jerusalem,” about 300 students aged between 10 and 13 participated in educational and cultural workshops on the environment and the importance of preserving it, and also learned how to recycle some waste into art projects for a competition between the participating schools later this month.

Shahd Idkaidek,13, is one of 30 students from the Young Muslim Women’s School who participated in the initiative to clean up the streets of East Jerusalem in early October. The school, located outside the old town in the Wadi al-Joz neighborhood, is one out of nine schools that partook in the initiative. The others are Aytam al-Thawri, the Modern Kindergarten, the Modern Mixed Kindergarten, Nur al-Quds, Mar Mitri, Al-Hassad, Siraj al-Quds and Hassan II School.

"I participated in the initiative because I believe it is very important for the city of Jerusalem to become green and clean,” Idkaidek told Al-Monitor. She added that she and her fellow students collected garbage in the area around their school and nearby streets.

The Wadi al-Joz neighborhood is located to the north of the Old City of Jerusalem. It is bordered to the east by the Sawwanah and Jabal al-Zaytoun neighborhoods, to the north and northwest by Sheikh Jarrah neighborhood and to the west by the demarcation line dividing Jerusalem into east and west, as per the agreement between the Israeli and Jordanian agreement of Nov. 30, 1948.

“We collected garbage from the streets for two reasons: to complete the waste art project and clean Jerusalem, and to show the Israelis that we are taking care of our city,” Idkaidek said.

Ghadir Sublaban, a teacher of art education at the Young Muslim Women’s School and the supervisor of the students participating in the initiative, told Al-Monitor, “The initiative came under the auspices and support of the Office of the European Union Representative in Palestine. The importance of the initiative lies in the fact that it raises awareness about cleanliness and positive behavior among students, which is kind of a struggle for Jerusalem’s children.”

She said that she will oversee the recycled art projects, adding, “The initiative will help students learn more on how to recycle, sort and reuse recyclable material. It will also make them realize the importance of community volunteer work.”

Rama al-Zaatari, 10, who participated along with 33 classmates from Al-Hasad School, told Al-Monitor he took part in the initiative "to collect and dispose of garbage, to preserve the environment and to reuse some of the waste that can be recycled," explaining, "We can, for example, use plastic bottles to plant flowers.”

Zaatari’s classmate Ishaq al-Hamouri, also 10, told Al-Monitor, “I participated in the initiative to encourage other students to preserve the environment and to learn not to litter. We picked up trash from the school and the surrounding area. We will use some of the recyclable waste in our art project.”

Al-Hasad is a private school in the East Jerusalem neighborhood of Beit Hanina, the biggest in the city.

Headmistress Rania Halaq told Al-Monitor that the initiative is imparting values such as volunteer work, respect for the environment and recycling to the students.

The initiative covered the streets and alleys of the Old City and the East Jerusalem neighborhoods of Sheikh Jarrah, Wadi al-Joz, Al-Thuri, al-Zaim, Ras al-Amud and Beit Hanina. Most of these neighborhoods have political and historical importance. The Sheikh Jarrah neighborhood, for example, to the north of the Old City, was established in 1956 under an agreement signed between the Jordanian government, which controlled the West Bank, and the UN Relief and Works Agency for Palestinian Refugees to accommodate the Palestinian families displaced in 1948. Al-Thuri, located south of the Jerusalem Wall on the demarcation line with West Jerusalem, is one of the largest neighborhoods in predominantly Palestinian East Jerusalem. It is surrounded by settlements and sites belonging to Israel's Jerusalem Municipality.

“The EU funds this activity under the EU East Jerusalem Programme [which is] a multi-sectoral investment that has grown to over 10 million Euros annually. The programme covers areas ranging from education to health; social inclusion to private sector development; community empowerment to human rights,” read an Oct. 9 EU statement.

The initiative’s coordinator at Impact Services and Public Relations, Farah Saeed, told Al-Monitor, “The initiative was divided into three phases. There were educational and awareness-raising workshops on the environment and the importance of preserving it and waste recycling, with the participation of technical and environmental experts." Actual waste collection and then art workshops followed.

The initiative is the first of its kind in Jerusalem. The spokesman for the EU in Palestine, Shadi Othman, told Al-Monitor that the East Jerusalem schools that are supported by the EU came up with the idea. The EU welcomed the proposal and endorsed it in a bid to raise awareness on the environment, recycling and other issues facing the residents of East Jerusalem.

Othman said that the initiative promotes a sense of community service among participants and hopes it will be repeated next year as “an annual tradition," saying, "It will be held on a larger scale on dates marking international events such as World Cleanup Day. We will work to integrate more schools as well,” Othman said.