Ankara has declared an “all-out fight against inflation,” cajoling sellers into 10% discounts and sending municipal police to hunt hoarders, and while this bizarre strategy is unlikely to bear fruit, it might be a sign of other plans that are being cooked up in Ankara. 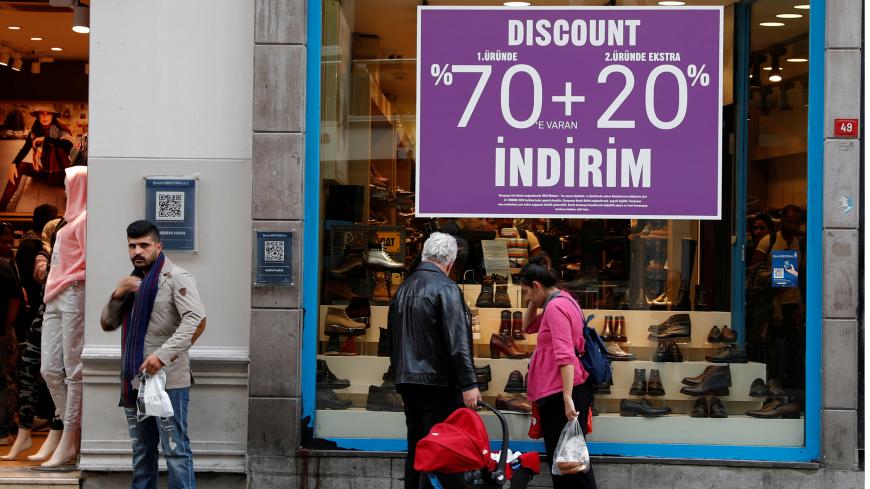 People look through a shop window in the main shopping and pedestrian street of Istiklal in central Istanbul, Turkey, Oct. 9, 2018. - REUTERS/Murad Sezer

Turkey is grappling with soaring inflation, the highest since 2003, which was the first full year in power of the Justice and Development Party (AKP). In September, year-on-year inflation reached 24.5% in consumer prices and 46% in producer prices. The inflation dynamics indicate that the year-end figures could climb to between 30% and 35% in consumer prices and between 50% and 60% in producer prices.

Consumer inflation had been in single digits since 2003, excluding last year, when it reached 11.9%. The current surge is a new situation that makes wage earners and pensioners relatively poorer as they fail to increase their incomes in line with price increases. The biggest fear of working people, however, is that they could end up with no income at all if the slowing economy spawns a new wave of layoffs. For those indebted to banks, the reasons to worry are even bigger.

Faced with an inflation unseen in the last 15 years, Turks are primarily incensed over the increase in food prices, which owes heavily to the ill-advised policies of the AKP. For years, the AKP encouraged construction-centered growth, neglecting agriculture, as a result of which Turkey is now facing supply shortages and has become a net importer of food.

The main factor fueling inflation, however, is the dramatic depreciation of the Turkish lira or, in other words, the huge increase in foreign exchange prices. At the end of September, the price of the dollar was up 82% from the same period last year. In the first 10 years of AKP rule, the price of the greenback had increased only 27%, which made possible the single-digit inflation rates. With the currency crisis this year, imports became much more expensive and the costs of producers shot up, hence the 46% producer inflation in September.

The big gap between producer and consumer inflation indicates that retailers have refrained from hiking their prices at the rate of producers. Yet despite the threat of sharp declines in domestic demand, consumer prices have already soared 24.5%. No doubt the global increase in the prices of energy and commodities such as wheat, iron ore and copper has also played a role in the growing cost burden for producers.

According to government officials, however, the soaring inflation is essentially the work of malevolent actors such as greedy middlemen and speculators who have to be disciplined through forceful measures, including the mobilization of municipal police. In an Oct. 2 speech, for instance, President Recep Tayyip Erdogan said, “I’d like to appeal to my dear nation: You are the ones who inspect the prices most closely at supermarkets and elsewhere. If you spot products with extraordinary price differences, report them immediately to the municipal police. I am also calling on mayors to encourage more attention on the issue among the municipal police. It is our duty to do what is necessary if there are fluctuations in prices and to raid stocks if there are hoarders.”

Treasury and Finance Minister Berat Albayrak, who is also the president’s son-in-law, followed suit. In a television interview the following day, he said citizens were reporting “speculative” price hikes on a consumer line set up by the government. “Citizens and [government] are both in action,” he said.

Interior Minister Suleyman Soylu, for his part, instructed governors across the country to tighten measures against hoarding and price gouging and slap fines on transgressors.

In short, Ankara has refused to acknowledge the real dynamics of inflation and draw up measures accordingly. True to style, it has instead pointed an accusing finger at “villains,” who, in this case, are hoarders and opportunists.

For those familiar with the AKP, this strategy is hardly a surprise. Blaming setbacks and problems on external factors, conspiracies or instigators has been an AKP hallmark for years. According to this thinking, the surging inflation cannot be the result of Ankara’s mismanagement, so it must be the work of greedy actors in the market, against whom the victimized populace has to be protected.

Then, at an Oct. 9 meeting attended by leading business people, Albayrak announced an “all-out fight against inflation.” As part of the campaign, which is perhaps unprecedented in the world, the private sector promised 10% discounts to consumers by the end of the year. Another measure envisaged a freeze on the prices of gas and electricity, again by the end of the year. Banks, for their part, would contribute a 10% cut in the interest rates of already issued loans.

The Turkish Statistical Institute (TUIK) calculates consumer inflation on the basis of more than 400 products and services, which are provided by tens of thousands of companies in the market. Participation in the campaign was not obligatory, but the business community was asked to promise discounts. Of course, no one publicly raised objections, but many could not conceal sardonic smiles. With consumer prices already up by more than 24% and further cost-related hikes already factored into producer prices, discounts of 10% will make little difference.

The increased prices, meanwhile, have led to a drop in domestic sales. According to TUIK, retail sales were down 3% in August in terms of inflation-adjusted value. The drop is likely to have worsened since then, given the decreasing real income of consumers. The shrinking demand has already forced companies to make markdowns, with many shops advertising discounts of up to 50%. This again raises the question of what difference the 10%-discount campaign can make.

So, what is the government’s actual purpose with the campaign? Is it another attempt to shirk responsibility by portraying inflation as an external calamity against which a fierce struggle is waged? Or is the government laying the ground for looming negotiations with trade unions to determine the hike in the minimum wage, which is the principal income of millions of Turks? By claiming a sincere struggle against an externally inflicted setback, Ankara might be planning to press its interlocutors to make their own sacrifice in the “all-out fight” and acquiesce to a low pay hike. This perhaps is the calculus behind the AKP-style fight against inflation.