What's behind Russia’s 'wait and see' approach on Khashoggi killing?

Russia has been keeping a rather low profile on the killing of Jamal Khashoggi, but this stance is driven by profound considerations of Moscow's own role in the Middle East 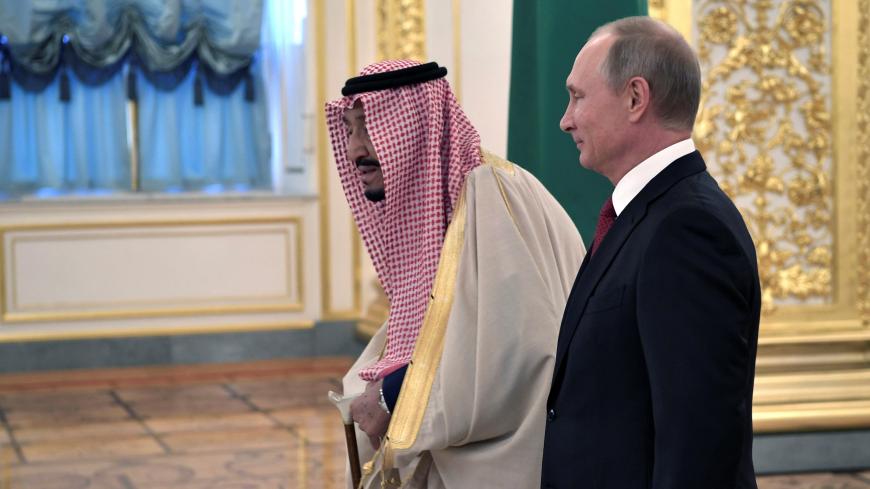 MOSCOW — On Oct. 25, Saudi King Salman bin Abdul-Aziz Al Saud called Russian President Vladimir Putin. The official readout of the conversation said that Salman confirmed his invitation to Putin to visit Saudi Arabia and that the two “agreed to work out the terms of such a visit through diplomatic channels.” Putin and Salman also “thoroughly discussed issues of the further development of multifaceted bilateral cooperation, including in the energy sector,” as well as Syria and “the state of affairs in the Middle East in general.”

“The situation around the ‘Jamal Khashoggi case’ was also addressed,” the readout said. Up until now, Russia has kept a low profile on one of the most heinous recent international incidents.

The next day, Putin spokesman Dmitry Peskov said Salman informed Putin of the measures the kingdom was adopting to investigate the killing of Khashoggi and bring to justice those responsible for it.

Peskov said a journalist's question about whether the Kremlin believes the Saudi family was involved in the crime was “irrelevant,” adding that Moscow welcomes Riyadh’s “intent to hold a thorough investigation.”

“First of all, we have to wait and see what really happened there. We can’t spoil our relations with Saudi Arabia without due knowledge of what happened. As far as I understand, this man was part of the Saudi elites, had some connections with ruling circles there. It’s hard to say what is really happening there. But we also see there are complex developments happening within America’s own ruling elites; hope they won’t take it that far in America,” Putin joked.

“If it indeed was murder, then we need to see the respective evidence and take respective decisions based on it,” he added.

Putin also took advantage of the question on Khashoggi to expose “double standards” of the West over the Skripal case involving the poisoning of a former Russian spy and his daughter in the British town of Salisbury that was almost immediately attributed to Russian military intelligence. In Russia, many drew comparisons between the two incidents, calling Khashoggi’s murder “the Middle Eastern Skripal case.”

“You know they often take action against Russia on inflated allegations, like use of chemical weapons, and introduce sanctions against us. … There’s no evidence against Russia [on these allegations] but they do take steps. Here, they say, a murder took place in Istanbul but no steps are taken. So they need to be clear about approaches to problems like these,” Putin said.

“But let me reiterate, our policy vis-a-vis Saudi Arabia has been shaped for many years. The fact that the man has gone missing is a tragedy, but we first need to learn what really happened there,” Putin concluded.

Ironically, in 2017 Khashoggi attended the Valdai Conference on the Middle East in Moscow and argued for a stronger relationship between Moscow and Riyadh.

The killing of Khashoggi made many Western states and companies either withdraw or reduce their participation in the Saudi-hosted Future Investment Initiative held in Riyadh from Oct. 23-25. Russia, on the contrary, expanded its participation. Thirty businessmen, mostly top managers of leading Russian companies, and cultural luminaries such as the head of the Hermitage Museum in St. Petersburg, trained Orientalist Mikhail Piotrovsky, attended. Also, a small art collection from the State Russian Museum was exhibited in the Russian corner of the venue — the first such exposition in the Middle East — making the Russian delegation one of the most representative at the forum. The Kommersant newspaper reported that the Russian corner became a dress rehearsal for the Week of Russia cultural event originally scheduled for November but now postponed, most probably until Putin’s own visit to the kingdom.

Kirill Dmitriev, 42, CEO of the Russian Direct Investment Fund and a Harvard Business School alumnus with yearslong experience at Goldman Sachs and McKinsey & Co., led the Russian delegation. He praised the Saudi forum and gave support for Crown Prince Mohammed bin Salman’s Vision 2030 project. Dmitriev, who was named as a young global leader by the Davos Forum in 2009, has long been working on strengthening bilateral relations in the area of finance and investments and was one of the founding fathers of the Russian-Saudi Investment Fund launched last year. Since his return to Russia in 2000, Dmitriev has been busy with similar work with American businesses.

The Saudis appreciated the political message signaled by Moscow and even reiterated an earlier intent to discuss the possibility of investing $5 billion in the Arctic lNG-2 project. To date, however, there’s little sign that Moscow has been able to convert this approach into geopolitical or economic capital. Riyadh’s ongoing interaction with Western companies suggests the kingdom is not swinging away from more preferable business projects to bigger dealings with Moscow only to punish the former: No sooner did the forum begin when Saudi Aramco signed 15 memorandums of understanding on trade cooperation worth $34 billion, including with the French company Total. Still, putting interactions with Moscow in the headlines helps the Saudis remind the Westerners of alternative partners who can fill the void.

For Russia, however, the Khashoggi case is not just about the Saudis, with whom they might exploit big opportunities if Western business partners do abandon current or future Saudi projects; the United States got its own share of disguised criticism from Putin. Once Turkish President Recep Tayyip Erdogan began taking an active stance on the issue, there was no shortage of analysis in Russia about the opportunities Ankara seeks to exploit from this incident. While official Moscow has not publicly mentioned a Turkish factor in the situation, analysts point to three major elements at play. One is a deep-seated Saudi-Turkish animosity motivated by historical, ideological and geopolitical reasons as well as by the struggle for influence in the Sunni world; the second is Erdogan’s concern about the role Prince Mohammed may play in defining the fate of the future Middle East; and the third is Ankara’s jealousy about Riyadh’s relationship with Washington and how this could eventually strengthen Saudi position in the region and thus may make the other two concerns Turkey has regarding the kingdom come true.

Erdogan is thus seen as the one being in control of the media offensive against the Saudis, where Turkey's gradual and continuous media leaks keep the story burning in order to both undermine the crown prince's position in the eyes of President Donald Trump, portraying Mohammed as an unreliable and even dangerous partner, and weaken Saudi’s broader claim for regional leadership. The idea is that Turkey could emerge as a more solid and influential partner than Saudi Arabia: hosting the leaders of Russia, France and Germany for a four-party summit on Syria in Istanbul on Oct. 27 is yet another means to emphasize this message to Washington.

A Russian proverb says “the quarrel of lovers is the renewal of love.” Even if Moscow sees the Khashoggi case as a mixture of possible opportunities that may or may not be taken advantage of, the bottom line is the incident turned out to be a heavily politicized issue that regional heavyweights will be using for leverage with the United States and each other. Political relationships in the region can be easily broken and then mended in most unexpected ways — and the other way around. Hence the dominant logic is if your interest vis-a-vis the region is strong and long-term, such as that of Russia, you would be wise to stay clear of incidents where you gain more with all parties by not interfering.