Is historic Palestinian strike a milestone for the one-state solution?

Palestinians living in Israel, the West Bank and Gaza Strip held a joint strike to protest the Israeli Nationality Law 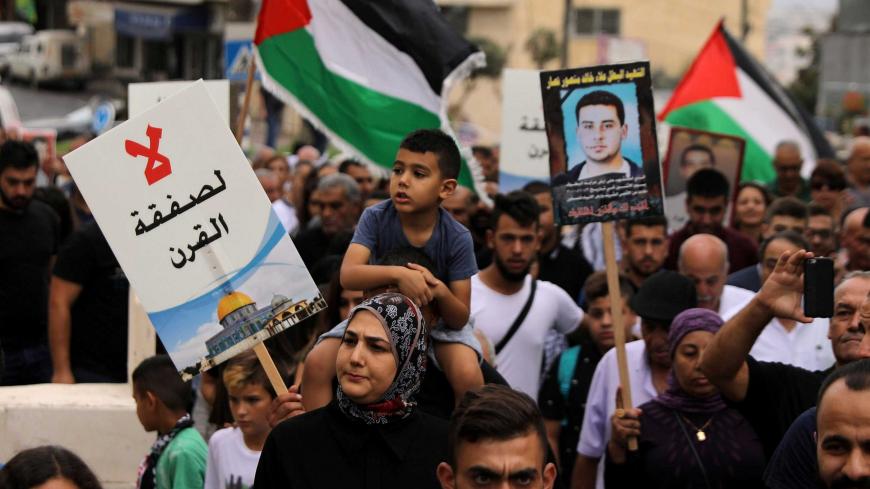 The month of October began with a rare occurrence in the Middle East. Palestinians in the occupied West Bank and Gaza Strip joined Palestinians living in Israel for a one-day strike to protest Israel's new Nationality Law.

The law, passed in July, specifies that Israel is a Jewish state and that Jews have rights that minorities do not.

Asaad Abdel Rahman, a former member of the Executive Committee of the Palestine Liberation Organization, called the event “historic,” noting how rare it is that all three communities protest on the same day on the same issue. He said, “The strike, which was very well observed in the 1948 areas, in the West Bank and Gaza reminds us of past historic events carried out by Palestinians.”

Abdel Rahman told Al-Monitor that if such an event became a trend, it could be of extreme importance. “If this unity of purpose and serious cooperation for a common national goal continues, this would be a good thing,” he said.

Anis F. Kassim, editor of the Palestine Yearbook of International Law, told Al-Monitor, “This protest reflects a high level of maturity and an awareness of the dangers posed by the new Jewish Nationality Law. Arab unity in the protests is of extreme importance in standing up to this discriminatory law.”

Kassim said he believes the unity of Palestinians reflects a shift in priorities toward the one-state solution. “I think the next slogan we will be hearing more of is that of 'A state for everybody.'”

Diana Butto, a former member of the PLO's negotiating team who now lives in Haifa, told Al-Monitor that the Oct. 1 strike is “sign of a new era” led by Palestinian citizens of Israel. She said, “What is important and new is that this time Palestinians in the 1948 areas are leading, and the West Bank/Gaza leadership is following.”

Butto, who is a lawyer, said the strike was the first where Palestinians initiated a joint protest action “not as a result of violence, but based on a political issue.” She said the conflict between Fatah and Hamas has weakened the Ramallah-based leadership, making the strike possible.

Like Kassim, Butto told Al-Monitor that the unity of the different Palestinian communities reflects a possible shift away from the two-state solution. “It is definitely bringing the struggle for equal rights in one state much closer,” she said.

Jawdat Mana’a, a refugee from the Dheisheh camp near Bethlehem and a former spokesman for the camp’s youth club, told Al-Monitor that the strike is the most visible example of the closing of efforts to reach a peaceful resolution to the Israeli-Palestinian conflict.

Mana’a said, “The Israeli law serves Israel’s security and legitimizes the settler’s terror, the army occupation and the Israeli government’s use of laws to discriminate against their own citizens who number 1.8 million.” Around 1.8 million of Israel's population of 8.8 million are Palestinian.

Mana’a said a new era has dawned in the Palestinian-Israeli conflict where Israel, which has rejected a peaceful solution, will be the eventual loser. “With support from the right-wing Israeli government, the Trump administration has invalidated all final status issues, which means that there is nothing left to negotiate,” he said.

While most Palestinians appear to have publicly supported the strike, some in East Jerusalem complained that the strike, because it was held on a Jewish holiday, allowed Jewish extremists to have that part of the city all to themselves. Khalil Assali, editor of the East Jerusalem-based website Akhbar El Balad, told Al-Monitor about the public discontent in Jerusalem. Because of the strike, stores were not open, and Palestinians then did not go out to shop, leaving a void of sorts.

“People were angry at the political leaders for serving the Israeli agenda by leaving the city empty of Palestinians, a situation that was quickly filled up by thousands of extremist Jews who held unprecedented religious ceremonies in the Old City of Jerusalem,” Assali said.

Assali said that a number of innocent Palestinian passers-by were assaulted by rowdy Jewish extremists who were able to hang around the Old City with no one to hold them accountable for such actions.

Despite the rarity of the recent strike, Palestinians have in the past held joint events. Land Day in 1976 and protests involving the second intifada in 2000 produced immediate responses that united Palestinians for a short time, but these events failed to produce a permanent structure or continuous protests

Palestinians are indeed unhappy with the status quo of no peace, no war and a continuing occupation — which appears to be what the Israeli government wants to perpetuate — in the absence of a Palestinian surrender or acquiescence to a US peace plan likely to be biased in Israel's favor. Perhaps a unity of purpose and aim could indeed represent a new era in the Palestinian national struggle for freedom from occupation and for equality.