UN gives thumbs-up for Palestine to lead Group of 77

The UN General Assembly is granting Palestine additional membership rights during its one-year chairmanship of the Group of 77. 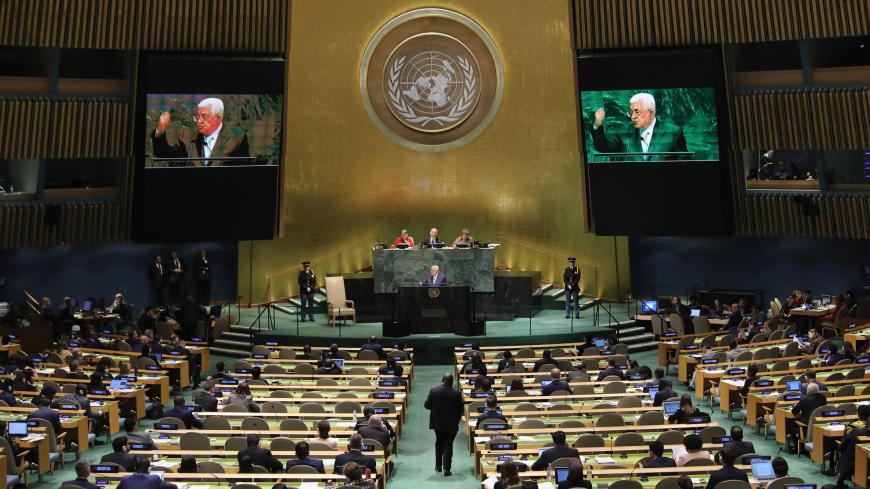 RAMALLAH, West Bank — Palestinian leaders are pleased with the UN General Assembly's recent vote to enhance Palestine's observer-state UN status, allowing it to head the Group of 77 and China (G-77) next year.

The Palestinian UN delegation will work with the Palestinian Foreign Ministry in the next two months to complete all the preparations and arrangements for Palestine to assume the G-77's rotating presidency. Palestine will be heading the largest intergovernmental bloc of UN member-states for one year effective Jan. 1. The G-77's initial membership of 77 developing countries has grown over the years to 134. Its purpose is to defend the economic, environmental and developmental interests of its members. It aims to strengthen their leverage with major powers such as the United States or European countries.

On Oct. 17, the 193-member UN General Assembly agreed to grant temporary extra rights to Palestine to fulfill its leadership role. Of those present, 146 members voted in favor of the resolution, 15 abstained and three voted against it: Israel, the United States and Australia.

The extra rights allow Palestine to act as a full-fledged UN member, except for the ability to vote. According to the resolution, Palestine will be able to submit proposals and amendments to the General Assembly, co-sponsor proposals and amendments, make statements on behalf of the G-77 and raise procedural motions, including points of order and requests to put proposals to the vote, on behalf of the G-77.

Palestinians see the move as proof of the international community’s confidence in their ability to lead the G-77. In addressing the group Sept. 27, President Mahmoud Abbas pledged his government's “full commitment to fulfill its duties and responsibilities with honor and integrity, in a way that earns the trust of the G-77.”

The G-77 presidency has two important dimensions for Palestine, said Amr Awadallah, head of the Palestinian Foreign Ministry's directorate general for the UN and UN-specialized organizations.

First, he told Al-Monitor, the position bolsters the international community's confidence in Palestine. “Palestine will be representing the largest international bloc before UN member-states on global issues related to poverty, development, environment and nature issues. This is the greatest privilege that Palestine can have.”

On the second dimension, Awadallah said, “The resolution ups the UN status of Palestine. It confers privileges to Palestine that it didn't have as a UN observer-state."

He further noted, “Palestine’s presidency of this group is a test. It will prove Palestine’s capabilities and experience in assuming efficient international roles. This will enhance its image as a successful state before the international community. “

In 2012, the UNGA granted Palestine nonmember observer-state status. Palestinians saw this as a diplomatic victory, allowing their country to accede to UN international conventions and organizations.

Awadallah denied the status upgrade is politically motivated. “Rather, [the decision] took into consideration the international bloc’s best interests. These interests are in line with those of the state of Palestine and its strategy. Palestine wants to be part of the international system [geared toward] human rights. It wants to fight the proliferation of arms and weapons of mass destruction, and everything that is destructive to the environment," he said.

Nabil Shaath, Abbas' adviser for international affairs, told Al-Monitor, “Although Palestine’s core mission at the UN focuses on political issues, our work within the G-77 is of a legal, economic and environmental nature. We have a technical function that aims to serve the [world]. ... The Palestinian presidency of the G-77 falls within the scope of the Palestinian strategy to put Palestine, a UN nonmember observer state, on the world’s map as a sovereign state."

He added, “Under the UNGA resolution, Palestine will be representing 134 countries, accounting for 80% of the world’s population. This gives new international support to the Palestinian position and to the statehood of Palestine at the UN. The Palestinian leadership of the G-77 is an opportunity for Palestine to establish and maintain greater and better relations with the other G-77 members. This would also provide a projection of what Palestine can do if it becomes a full-fledged UN member.”

To become a full-fledged UN member-state, Palestine would need a UN Security Council resolution. "We all know that the US will veto such a resolution," Shaath said. "But Palestine’s current achievement is positive. It doesn't guarantee it the full member-state status, but it remains a great international boost.”

Commenting on the timing of the General Assembly resolution, Shaath said, “This comes in light of a critical political stage for Palestine. US President Donald Trump declared Jerusalem the capital of Israel. He also expressed his intention to undermine the refugee issue by halting UNRWA [UN Relief and Works Agency] aid."

Shaath also pointed to the pending US peace plan for the Middle East, "which we see as a plan against the creation of a Palestinian state based on the 1967 borders.”

The last round of Israeli-Palestinian direct peace talks sponsored by the United States broke down in 2014. Since then, the Palestinian Authority (PA) has become even more convinced of the need to exert increased efforts on the international stage, to upgrade Palestine’s international and diplomatic standing. Heading the G-77 falls within that strategy.