While the Netanyahu government considers it to be a minor inconvenience, the choice of Palestine to head the UN’s largest group of developing countries greatly strengthens the diplomatic status of Palestinian leadership as an international player. 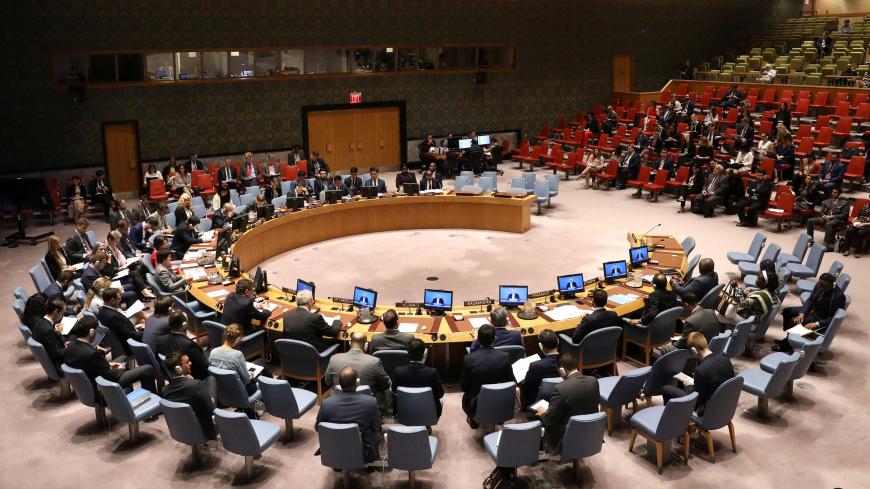 The United Nations Security Council hears a briefing by Nikolay Mladenov (on screens), UN special coordinator for the Middle East Peace Process, from Jerusalem on the situation in the Middle East as the council meets on Israel and Palestine at UN headquarters in New York, May 23, 2018. - REUTERS/Mike Segar

On July 24, the bloc of developing countries at the United Nations chose Palestine as its next leader. This decision by the bloc — known as the Group of 77 — to designate Palestine as the group's 2019 chair (starting in January) lends the Palestinian leadership great prestige, just six years after the international body recognized Palestine as a non-state member.

I admit I was not among the greatest fans of the diplomatic offensive launched at the turn of the decade by Palestinian President Mahmoud Abbas, and I underestimated its importance. I saw it as an act of desperation by a man who had given up on prospects of reaching bilateral agreement with Israel and was leading a hopeless maneuver for the world to impose an agreement on the two sides. It seemed clear at the time that the attempt to push through UN Security Council recognition of Palestine as a non-state member was doomed to fail, and I thought it was pointless. I also thought Israel should be supporting the Palestinian diplomatic efforts, to the point of being the first to recognize Palestine, as being an important goodwill gesture.

On the face of it, the prospects at the UN were clear: There was always a majority in the UN General Assembly for every Palestinian proposal due to the strong support for the Palestinians among developing nations (the largest UN bloc), whereas the United States could be counted on to veto any UN Security Council resolution perceived as anti-Israeli.

In fact, the Palestinians did not have to wait until 2012 to obtain recognition as a nonmember state — they could have achieved this status in 1988 when they declared themselves a state. The first Palestinian president, Yasser Arafat, told me at the time that he had no interest in winning official UN recognition of Palestinian independence nor membership in that body. Arafat felt that such recognition would create an illusion that the Palestinian problem had been resolved, that there was already a Palestinian state living peacefully alongside Israel, and the international community need not exert itself further in helping the sides make peace.

When Abbas launched his intense diplomatic campaign, he clearly understood that he did not have an Israeli partner. He had concluded that as long as Netanyahu was at the helm, there was no real chance of an agreement that he, as the Palestinian leader, could accept. Since he could not sit by idly, he was faced with three main options: armed struggle, nonviolent struggle or a diplomatic struggle.

An armed struggle was out of the question. Abbas had been the main opponent of the second Palestinian intifada, the violent uprising that erupted in the year 2000, and made no bones about his objection to Arafat’s choice of violence. Abbas did not rule out a campaign of nonviolence, and he still talks about it often in his speeches, but he knows well that the line between nonviolent and violent demonstrations is blurred (and easily crossed). When that happens, people are killed and it is hard to contain the counter-reaction. The third option was the one Arafat was wary of — seeking recognition as a virtual Palestinian state and playing the diplomatic game with intensity. Saeb Erekat, currently the secretary-general of the PLO, was the one who led this move. Salam Fayyad, then the Palestinian prime minister, was far less enthusiastic.

The Palestinian public was not wild about the diplomatic activity, either. Even the upgrading of the Palestinian Authority’s status at the UN from a non-state “observer entity” to a nonmember observer state in November 2012 did not generate much excitement. The giant screens placed on the streets of Palestinian towns to broadcast the event in the West Bank failed to draw significant crowds. The reason was clear: Everyone understood that this was a goodwill gesture toward a state that would never exist until agreement was reached with Israel.

Its upcoming leadership of the Group of 77 is an achievement that cannot be ignored, and it greatly strengthens the diplomatic status of the Palestinian entity as an international player, which has a say not only in the Palestinian struggle for independence, but also as regards the interests of the world’s developing nations.

The Group of 77 was founded 54 years ago at the end of the first session of the UN Committee on Trade and Development (UNCTAD) in Geneva, when some of the participating states issued a document titled “Joint Declaration of the Seventy-Seven Countries.” Although the group has almost doubled and now numbers 134 members, the original name stuck. As the largest grouping of UN members, its aim is to advance the interests of developing states within the UN institutions and organizations and to forge south-south cooperation.

As far as the Netanyahu government goes, this is a minor inconvenience. However, anyone who sees the relationship between Israel and the Palestinians as a zero-sum game would regard this development as a blow for Israel. The Palestinians regard it as an important contribution to their national struggle. Palestine’s Ambassador to the UN Riyad Mansour told The New York Times that while Israel and the United States “are still denying we are a state, we walk like a state. We quack like a state. Therefore we are a state.”