Russia, Germany at loggerheads over Idlib

Germany has recently engaged with the United States, the UK and France to take a stronger stance on Syria. But as Chancellor Merkel encounters strong domestic opposition on potential military action in Syria, the significance of engaging with Russia increases. 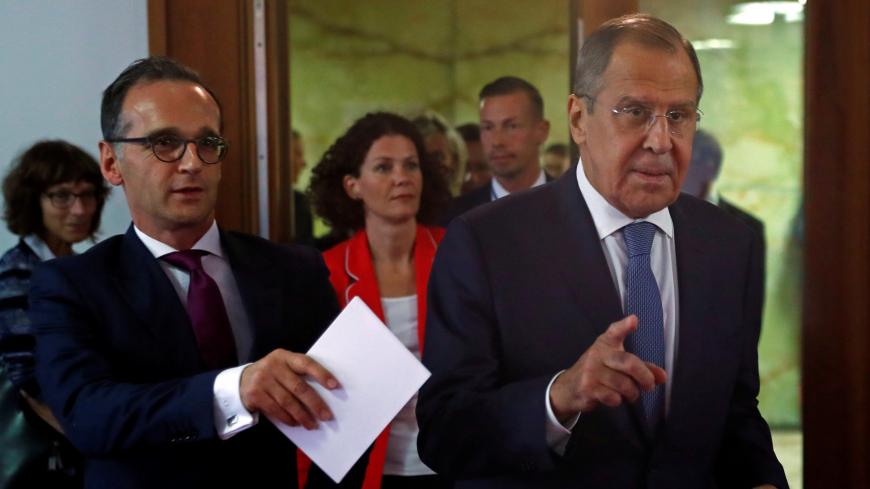 On Sept. 14, Russian Foreign Minister Sergey Lavrov visited Berlin. He came to the German capital to take part in the closing ceremony of the Russian-German Cross Year of Regional and Municipal Partnerships. During his visit, Lavrov met with German Foreign Minister Heiko Maas to discuss bilateral trade and energy issues, such as the construction of the Nord Stream-2 pipeline, as well as the Skripal poisoning case in England, the crisis in eastern Ukraine and the situation in Syria. On most of the discussed international issues both countries have different and sometimes totally opposite views. Relations between Moscow and Berlin have been seriously damaged since 2014 over the crisis in Ukraine followed by the sanctions Germany, along with other European nations and the United States, imposed on Russia.

Until now Germany may not have been more critical but certainly has been less public about its Syria policy than France and the UK. Recently, Berlin has raised its profile on the issue, calling for concerted global efforts to prevent chemical weapons from being used in Syria.

Defense Minister Ursula von der Leyen urged a “credible deterrent” while Maas said diplomacy was the top priority to prevent the use of chemical weapons in Syria. At the same time, Chancellor Angela Merkel is under immense political pressure at home, with the latest polls suggesting 74% of Germans oppose potential military strikes on Syria similar to those launched by the coalition of the United States, the UK and France earlier this year. Such a context made the talks with Moscow all the more important.

During the meeting both Russian and German foreign ministers quite predictably paid a lot attention to the situation in Syria’s Idlib.

“We do not want to see thousands of deaths among civilians,” Maas said.

Lavrov, in turn, said reports that there was a Russia-supported Idlib offensive by the Syrian army are a “malicious distortion of facts.”

“Both the Syrian forces and we merely react to hit-and-run raids from Idlib,” he said. These raids can involve unmanned aerial vehicles. “It is very hard to detect drones with ordinary air defense weapons. Many of them are made of wood and cannot be seen on radar screens,” Lavrov said.

Lavrov said that Moscow has intelligence information on where the terrorists assemble drones in Idlib and that it will be eliminating these underground workshops.

Berlin promised reconstruction help if Moscow kept Syrian President Bashar-al Assad from launching an offensive in Idlib and could help find a peaceful solution to the conflict.

“If there's a political solution in Syria that leads to free elections, then we are ready to take on the responsibility of reconstruction. It is in our interest for Syria to be a stable country. For that, reconstruction is necessary. And we have an important role in that,” Maas wrote on his Twitter account.

The German foreign minister said Syria will need more than the help of just the Russians, Iranians and Turks to reconstruct the country.

The German weekly newsmagazine Focus, commenting on the Lavrov-Maas meeting, said the German federal government has recently been making contact with Russia. “Germany has been trying for many months to influence Moscow on all diplomatic channels so that Moscow in turn can use its influence on Assad.”

German politicians, however, seem to be skeptical about a possible deal with Russia. Norbert Rottgen, chairman of the Foreign Affairs Committee in the Bundestag, said he had heard nothing new from the Russian minister. The legislator said Russia is following “clear, naked power politics.”

Earlier this month, the German daily newspaper Bild published a report saying Berlin would consider a military deployment in Syria if another chemical weapons attack was carried out. According to the report, high-ranking officials from Germany and the United States had met to discuss possible German involvement in US-led air strikes on Syria. The report said Germany's defense minister had responded to a US request, which was followed by a meeting of high-ranking ministry and military officials from both countries. According to Bild, German Tornado jets could take part in combat missions alongside their US, UK and French counterparts.

The report sparked much discussion among the German political establishment. Many politicians within Merkel's conservative faction say the idea should be seriously considered. The German Defense Ministry has hinted that various response scenarios are being prepared, but it's all hypothetical, as Deutsche Welle reports.

Rottgen said Germany should consider joining its Western allies in future military missions "under specific conditions.” He said Germany should not rule out efforts to “prevent a new, horrific gas attack with a massive effect on the civilian population.”

“Of course, the German government is in contact with its partners and allies,” Seibert said. There is considerable concern that “horrifying precedents from other Syrian battlefields could be repeated.”

However, there is no consensus outside Merkel's party on possible involvement in the Syrian crisis. Members of the opposition Greens and Free Democrats supported an intervention. Germany’s Social Democrats, which are in a grand coalition with Merkel's Christian Democratic Union, are against.

The leader of the Social Democrats, Andrea Nahles, said Sept. 12 that her party would not agree to military intervention in Syria if the United Nations did not authorize the international community to take such action.

“As long as this doesn’t happen, we Social Democrats can’t agree to a violent intervention in Syria,” Nahles said. Earlier, she had said her party “will not approve Germany joining the war in Syria, neither in parliament nor in the government.”

Armin-Paul Hampel, the foreign affairs spokesperson for the right-wing Alternative for Germany, said German participation in a mission in Syria would be a breach of the constitution, and questioned whether the Assad regime had in fact previously used chemical weapons, as is widely believed to be the case.

Left Party politician Gesine Lotzsch said Berlin would be making itself a submissive partner of American President Donald Trump if it were to join a combat mission in Syria.

German participation in any possible operation is still unclear. First of all, a parliamentary vote would be needed to send German troops to Syria, which would be difficult considering the absence of a consensus in the Bundestag. Nevertheless, if Berlin joined the alliance, it would risk direct confrontation with Moscow.