Major Israeli film festivals are operating under an impossible Catch-22: on one front, Culture Minister Miri Regev threatens to slash funds of works that contradict her right-wing worldview, and on another front, Israeli cultural institutions are viewed as part and parcel of an occupying government uninterested in peace. 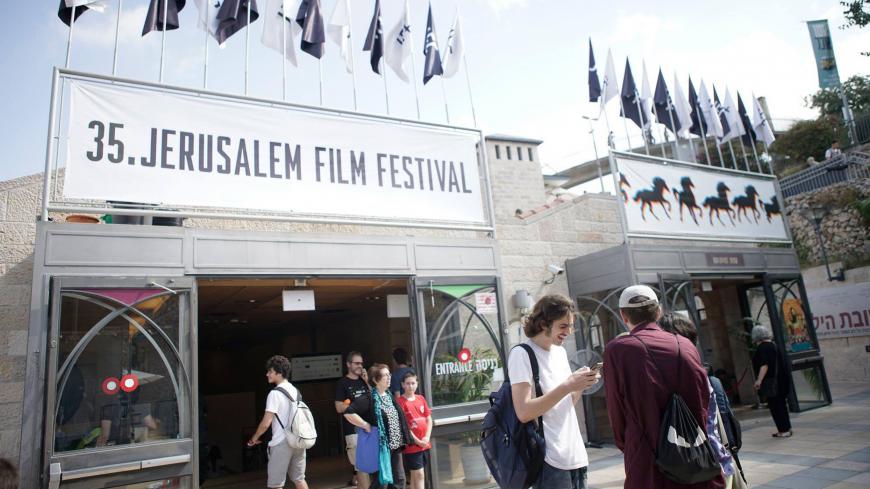 Major actors and directors declined to participate in this year's Jerusalem Film Festival, apparently for a number of political reasons. Posted Aug. 6, 2018.

For the first time since the Haifa International Film Festival’s inception in 1983, the event’s directors have been unable to persuade leading movie stars to take part in the festival, which will be held this year Sept. 22 to Oct. 1. Israel’s first international festival is far from being the only such event to receive notable rejections by invited guests. The Jerusalem Film Festival, held earlier, in July and August, suffered the same fate.

The organizers of the Jerusalem festival offered a long list of directors and producers the opportunity to screen their new films but often received negative replies. They were told that the time wasn’t right to visit, as the city stands at the epicenter of a tempest. A few noted that the actions of the Boycott, Divestment, Sanctions (BDS) movement had not frightened them off, because in principle, they would go to other cities in Israel. What bothered them was that participating in a film festival held adjacent to the City of David, an archaeological site near the Western Wall, could be interpreted as a political statement, as recognizing the city as the capital of Israel.

The Jerusalem organizers opted to keep quiet about the long list of rejections in the hope that things might improve next year. Perhaps the transfer of the US Embassy to the city in May of this year and ensuing Palestinian protests and international condemnation will be forgotten over time. Then, perhaps, they can rekindle interest in one of the world’s most highly regarded festivals of the international film industry.

Now it turns out that even the organizers of the established, prestigious festival in Haifa were also unable to convince well-known directors and actors to come to their mixed city. Instead, an honorary title will be bestowed on Zbigniew Preisner, who composed the music for the films of the acclaimed Polish director Krzysztof Kieślowski. Preisner will attend the festival and receive the prize for his exceptional cultural contribution to world cinema.

The artistic director of the Haifa Film Festival, Pnina Blayer, unlike her counterparts in Jerusalem, did not try to hide the fact that political, diplomatic and security issues had turned the task of recruiting stars into a “mission impossible.” In a Sept. 17 interview with Haaretz, Blayer stated, “It’s not only because of BDS. It’s enough when they see the pictures on television abroad about what is going on on our borders and in the neighboring countries. Today, it’s harder to bring guests from abroad to visit here.”

Perhaps those artists refusing to visit or perform in Israel have consciously chosen to blacklist Israel for ideological reasons or simply because they want to distance themselves as much as possible from a thorny conflict that might force them to take sides. In any case, Blayer feels that slowly but surely, a separation barrier is being erected between Israel and world cultural centers. Many on Israel's cultural scene from the theater, film and music worlds feel the same way.

Although not all internationally recognized artists join the BDS campaign and cancel performances in Israel, but the truth is that the boycott movement is growing and has led, among other outcomes, to the cancellation of a concert by the singer Lana Del Rey. The feeling in Israel is that many well-known artists now prefer to avoid Israel because of the events of the past year. They are troubled by Israeli soldiers shooting Palestinian protesters along the border with Gaza, the Jerusalem festival issue, and the recently adopted Nationality Law, which was covered in depth internationally. The message is clear: Israel is withdrawing into its Jewish identity and character.

The international cultural isolation into which Israel is sinking is not the only problem facing Israel’s cultural elites. They are on the offensive in their own country as well. Take for example the case of the Haifa festival directors. Despite the difficulties stemming from being blacklisted by international film personalities, they succeeded in creating a line-up of films from around the world, but were then confronted with another struggle: the “loyalty-to-Israel” fight with Cultural Minister Miri Regev.

On Sept. 17, Regev turned to Finance Minister Moshe Kahlon, complaining about government financing of the Haifa festival. The festival's organizers had chosen to screen two Israeli films that, according to Regev, painted a negative picture of the State of Israel. In a letter to Kahlon, Regev argued that the films' content “damages and subverts the values and symbols of the State of Israel.” No less than that. She was speaking about the short film “Out,” written and directed by Alon Sahar, and “Acre Dreams,” directed by Daniel Wachsmann.

Sahar is an activist in the anti-occupation organization Breaking the Silence. “Out” tells the story of a young Israeli recently discharged from the military who joins a right-wing organization that tries to blacken the good reputations of human rights activists by using the camera as a psychological weapon in filming in Israel and the occupied territories. Wachsmann's “Acre Dreams,” set in 1947 during the last days of the British mandate, narrates the efforts of an Arab theater director to stage a play in mixed, Jewish-Arab Acre in which the role of the Arabs would be played by Jewish actors and vice versa. The play is the love story of the director’s grandmother, the Palestinian singer Layla, and his grandfather, Dr. Alfasi, the last Jewish resident in the city during the 1948 war.

The two films targeted by Regev’s wrath are exactly the kinds of works that Israel could use to refute the allegations of those trying to boycott it. They are a way to show that art can be used in Israel to express protest and also to plant the seeds of hope.

In response to the culture minister’s offensive, the Haifa festival’s directorate responded, “Intervening in the artistic program due to political considerations contravenes the principles of freedom of expression and creativity. Such intervention could be a slippery slope leading to the silencing of voices.” Thus, the directors of the 34th Haifa International Film Festival found themselves in the impossible position of being forced to do battle on two fronts simultaneously.

The battle that Regev leads is backed gleefully by members of Israel’s right wing. These people feel that Israeli cinema, and Israeli art in general, does not have the right to criticize their policies and certainly not to show Arabs in a human, positive light. For them, if, God forbid, artists take this road, and if an Israeli cultural institution like the Haifa festival dares to present their works, then the artworks must be disqualified and the budgets of those institutions slashed. In the other battle, with the international community, Israel’s cultural institutions are viewed as an integral part of an Israeli government that distances itself from peace and perpetuates the occupation.

It is doubtful whether Israel has an artist or director from a cultural, artistic institution with the deftness to safely help Israel thread its way through and off these battlefields.