Why Iranians are lured by Georgian delights

Iranians from different walks of life seek investment opportunities and residency in Georgia, thinking it would be a gateway to Europe — but is it that easy? 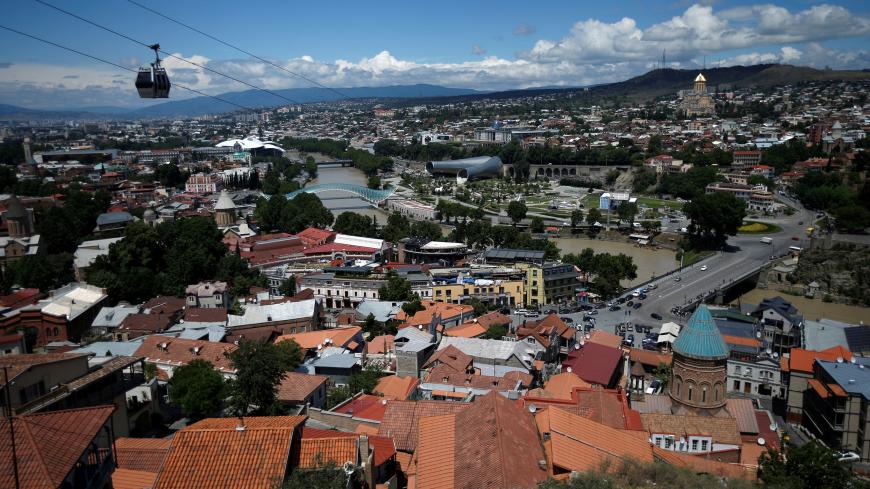 A general view of the city of Tbilisi, Georgia, June 8, 2016. - REUTERS/David Mdzinarishvili

For Iranians who are fed up with their country’s current economic situation, the answer lies in a historical dreamland: Georgia, as a gateway to Europe.

Ever since the two countries signed in 2016 a visa-free travel agreement, the number of Iranians visiting this country in the Caucasus has increased significantly, and many contemplate a life in the country whose rents, cost of living and inflation rate (2.8% compared to 9.4% in Iran) are lower than in Iran.

The number of Iranians traveling to Georgia has increased considerably since the signing of the agreement. Iran’s Ambassador to Georgia Seyed Javad Ghavamshahidi told Asriran news website on Aug. 24 that 323,000 Iranians have visited Georgia in the last 12 months, and this may increase to 1 million in the next year.

Part of the Iranians' interest in Georgia is due to the historical and cultural relations between the two countries. Parts of current Georgia have been under intermittent suzerainty of the Persian Empire up until the 19th century. In the 16th century, Tahmasp I, the influential shah of the Safavid dynasty, captured and moved thousands of Georgians to Iran, who later played an important role in the empire’s civil and military bureaucracy.

But for most Iranians, the lure of Georgia is more economic than cultural. With the US sanctions hitting ordinary Iranians and decreasing their purchasing power, many members of the Iranian middle class are preparing to start a new life in this nearby country, where they would not suffer from a dire economic situation or Western embargoes.

The influx of Iranians to Georgia has also caught the attention of the political circles. Member of parliament Mehrdad Lahouti expressed his concerns about Iranians investing in Georgia instead of in their own country. Lahouti, quoted by the local media Aug. 26, said, "In the past [only] wealthy Iranians made investments in a country like Georgia, but now this is happening among [all classes]. A few days ago I went to a dry-cleaning shop and the owner was saying that he had bought a house in Georgia."

Tehran-based companies that help Iranians get residency in Georgia report that the permit requests have increased. Al-Monitor spoke to two employees of companies operating in Tehran. Mahsa Seyyedi, a consultant at Ayene, said that many Iranians want to move to Georgia because no visa is required for short-term travel and obtaining a residency permit is straightforward.

She noted that the locals are hospitable and had no prejudice against Iranians. “Georgians treat foreigners well and I have heard no complaints of mistreatment of Iranians,” she added.

In March 2017, Georgians were granted visa-free travel to Schengen Area member states. This has increased the expectation that by 2020, the country can join the Schengen Area, thus allowing the country’s nationals — as well as its residents — to travel, work and settle in European countries.

Mohsen Salmani, a consultant at Georgia Amlak, told Al-Monitor, "Those who want to go to Georgia fall into two groups. The first group wants to get a residency permit in Georgia and settle and live there without the fear of economic problems and suffering from the eternal sanctions of the United States. The second group hopes their residence permit could get them into Europe [when and if] Georgia becomes part of the Schengen Area in 2020."

He added, "This is the most tempting factor that attracts Iranians to Georgia. While European embassies are getting stricter in term of issuing visas to Iranians, Georgia is turning into a gateway for Iranians who would like to travel to or live in Europe without the paperwork and obstacles imposed by embassies."

Ehsan Zahiri, a former manager of a restaurant in northern Tehran, told Al-Monitor, "I visited Georgia last year to find out what kind of country it is, and four months ago I decided to buy an apartment there. The economy is doing well and the cost of living is reasonable. I can actually save money by living there instead of in Iran. In addition, I can get a residency permit that will give me access to the whole Schengen Area once Georgia joins in 2020. I could then travel to Europe easily."

On March 28, 2017, Georgia and the European Union enforced an agreement on visa-free travel. The accord enables Georgian citizens to travel to the Schengen Area without a visa and to stay a maximum of 90 days in any 180-day period. While this is only applicable to holders of a Georgian passport, many Iranian immigration consultants assure Iranians that it is easy to obtain Georgian nationality once they have a permanent residency permit.

But Ambassador Ghavamshahidi warns that immigration companies' promises of easy residence and eventual nationality in Georgia may be fraud after all. "Purchasing a property in Georgia doesn’t guarantee getting permanent residency of this country,” he was quoted as saying by the BBC. He claimed that Iranian citizens who had obtained a one-year residency permit have been unable to extend it.

Explaining the reason behind the immigration of Iranian citizens to Tbilisi, Fatemeh Moqimi, the chairman of the Iran-Georgia Chamber of Commerce, told local media Aug. 3, that Iranians invest in Georgia because the country has a good economy where investors feel safe. "Getting residency in Georgia can also give them the opportunity to travel to Europe more easily," she added.

Moqimi, however, also urged Iranians to be cautious, noting the outstanding issues between Iran and the Financial Action Task Force (FATF) — an intergovernmental body created by the G-7 in 1989 to tackle money laundering. The FATF has urged Iran to address nine incomplete action items required by the FATF or face blacklisting and countermeasures, which would stop even Russia and China from dealing with Tehran.

“[This means] that bringing money into Georgia [by Iranian citizens] would not be without any problems, and [Iranians] who open a bank account could face problems in the future,” she concluded.