Iranians divided on whether their leaders should talk to Trump

Iranians are divided in their view of how to respond to President Donald Trump’s offer of direct talks. While many see it as insincere, they nonetheless welcome it as an opportunity to beat the United States at its own game. 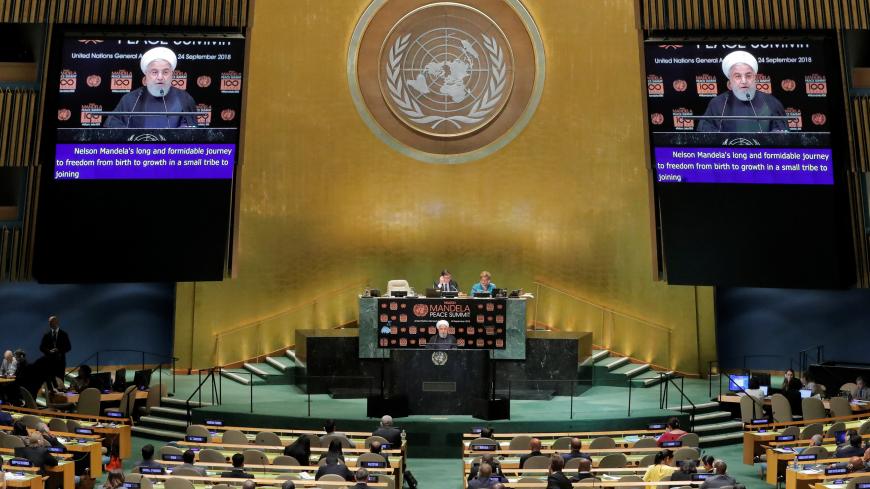 As President Hassan Rouhani is in New York to attend the 73rd session of the UN General Assembly, the Iranian public remains divided on whether he should meet with his US counterpart, Donald Trump.

Since the US withdrawal from the Joint Comprehensive Plan of Action in May and its reimposition of sanctions on Iran, Trump has on repeated occasions suggested that he is ready to hold a face-to-face meeting with Iran’s leaders. But what do Iranians think about his proposal?

Arash, 25, has a bachelor’s degree in civil engineering but works in a cell phone store. He says the market is not good and people are buying fewer and fewer cell phones. Arash thinks this is all because of US policies. He told Al-Monitor, “With sanctions returning and the devaluation of the rial, our work has become harder. If Trump and Rouhani meeting can truly solve the decades-old problems between Iran and the US, why shouldn’t we meet [with them]?”

Iranian officials say Trump had also sought a meeting with Rouhani during the 2017 General Assembly gathering. According to a July 18 statement by Presidential Chief of Staff Mahmoud Vaezi, the Trump administration asked for a meeting with the Iranian side eight times last year, but all of the requests were rejected.

Meanwhile, Iran’s Supreme Leader Ayatollah Ali Khamenei does not have a favorable opinion about meeting or holding talks with the United States. On Aug. 13, Khamenei officially banned any negotiations with US officials and said, “The US proposal for talks is nothing new. These proposals have been made since the beginning of the [1979 Islamic] Revolution. But what negotiation? They give empty words and in return expect cash from the negotiating side. Tomorrow, when they get the cash, they go back on their word.” He added, “Just as [the late founder of the Islamic Republic of Iran] Ayatollah [Ruhollah] Khomeini had banned talks with the US, I too forbid any negotiations with the Americans.”

Khamenei is not alone in his opinion. Government officials who previously welcomed dialogue with the West do not seem to have a favorable view about a meeting with Trump either. On Sept. 8, Rouhani said Trump sends an invitation for talks every two weeks, but that he does not think this is out of good will. “Should we look at the softness in your invitation or the animosity in your actions? If you truly mean it, then stop disrupting the lives of the Iranian people,” said Rouhani.

Iranian society is not unanimous in its opinion about this topic. Kamran Karami, a journalist and an expert in Iranian foreign policy, told Al-Monitor, “Considering the understanding and interpretation of our leaders and given Trump’s personal psychology, his resolve to talk to Iran seems serious. However, his priority seems to be to break the taboo of talking to Iranian leaders and having pictures with them in his personal album.”

Explaining what he thinks would be the correct policy for Iran to take in regard to Trump’s proposal. Karami said, “Given Rouhani and [Foreign Minister Mohammad Javad] Zarif’s expertise in negotiations and their knowledge of the principles of international organizations, the best thing would be to use this opportunity to explain Iran’s view. Because if Rouhani or Zarif attend the UN Security Council meeting to be chaired by Trump, the winning party will surely be Iran and not Donald Trump, who knows nothing about the rules and principles of multilateral diplomacy.”

In general, the broader Iranian public is less concerned with these complexities. Their main priority is improving their livelihoods, especially having encountered more serious problems following the severe devaluation of the national currency in recent months.

Morteza is a 60-year-old retiree who previously worked in Iran’s Agriculture Ministry. Since his pension does not cover his living expenses, he now works as a taxi driver. He told Al-Monitor, “What advantage has this opposition and animosity with the US had for us? Isn’t it that the economy should be of utmost priority for governments? When the president of the US personally tells Iran that he is ready to negotiate, without any preconditions, why shouldn’t we accept it? [We] should negotiate and end this situation.”

In this vein, North Korea has provided Iranian officials with a very clear idea of what would happen if they choose the path of negotiating with the US government. In a historic move, Trump and North Korea's leader Kim Jong-un met face-to-face in June, shook hands and took photos — but there was no key opening in North Korea’s situation. Indeed, as the North Korean leader insists on holding a new round of talks, Trump recently canceled a trip by his secretary of state to Pyongyang. This is perhaps why Iran is not too optimistic about the prospect of talks. “Tehran will not waste its time on additional negotiations with the United States about Iran's behavior in the region unless Washington rescinds its decision to withdraw from the nuclear agreement,” said Zarif in a Sept. 15 interview.

Iran’s former Ambassador to Jordan Nosratollah Tajik told Al-Monitor, “We have to use international potentials to maximize our national interests. The General Assembly and Security Council provide us with just this opportunity.” He added, “It is true that even if there were direct negotiations with Trump, we could not achieve much in terms of substance for various reasons. But with political planning, we can neutralize him and not be played in his field.”

It does not seem likely that the Iranian president will accept Trump’s invitation for a bilateral meeting. However, what seems to be a concern now is to not allow Trump to use the situation to his advantage, given that he is already being challenged by Iranian public opinion.

In this vein, an informed source in the Iranian presidential office told Al-Monitor, “Our problems with Trump are more serious than entering into direct negotiations. This form of dialogue is only suggested by a person who is not interested in results but is only looking for a show. This is exactly what Trump has in mind, and Mr. Rouhani is aware of it and will not play into Trump’s hands.”

As such, Iranian public opinion continues to remain divided on this matter. While some think breaking the taboo of a meeting between the presidents of Iran and the United States is enough to improve the current situation, others believe this is foolish thinking.