Intel: Why the Gulf states should fear a blue wave in November 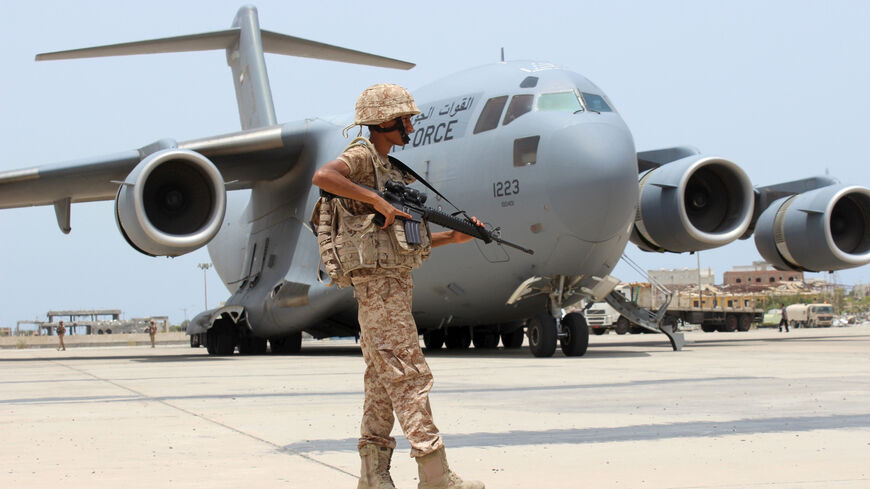 A soldier from the United Arab Emirates stands guard next to a UAE military plane at the airport of Yemen's southern port city of Aden, Aug. 8, 2015. - REUTERS/Nasser Awad

Top Democrats in Congress today introduced legislation that seeks to end US support for the air war in Yemen, highlighting the risk to the Saudi-led campaign if the minority party wins the November elections. Rep. Steny Hoyer, D-Md., the No. 2 Democrat in the House, endorsed the new bill along with Reps. Adam Smith, D-Wash., and Eliot Engel, D-N.Y. Smith and Engel are the likely chairmen of the armed services and foreign affairs panels if Democrats take the House. The bill was introduced by Rep. Ro Khanna, D-Calif. Khanna’s resolution is privileged under the War Powers Act, which stipulates expedited procedures on the House floor.

Why it matters: Democrats have lambasted Secretary of State Mike Pompeo’s recent decision to allow refueling support for the coalition to continue despite the high rate of civilian casualties. They are also skeptical of other actions undertaken under Saudi Crown Prince Mohammed bin Salman, such as the detention of women’s rights activists and the potential that Riyadh could use US technology to start a nuclear weapons program.

It’s different this time: While Khanna tried a similar gambit last year, he did not have the backing of Democratic leadership. And Republican leaders’ threats to strip his resolution of its privileged status ensured it never got a floor vote. While several Republicans have also voiced concern over US policy in Yemen, the Khanna resolution indicates that both Democratic leadership and the party’s rank and file are willing to take more drastic action against the Saudi coalition than Republican leadership.

“The Saudis need to change what they’re doing in Yemen because they need to push toward a more peaceful solution,” Smith told Al-Monitor.

What’s next: Sen. Bernie Sanders, I-Vt., a potential high-profile 2020 Democratic presidential contender, has told Al-Monitor that he plans to introduce a similar measure in the Senate. He succeeded in getting a floor vote on Yemen earlier this year, which ultimately failed 55-44. Polling aggregator FiveThirtyEight currently gives Democrats an 80% chance of taking the House but only a 32% chance for taking the Senate. A Democratic majority in either chamber guarantees a floor vote and increases the odds of Congress directing the Trump administration to stop supporting the Saudi campaign.

Know more: For more on the Democratic backlash against Pompeo’s Yemen war certification, read Bryant Harris’ report from earlier this month. And click here for his scoop Tuesday on Congress’ bipartisan proliferation concerns with Saudi Arabia.