A declaration by non-Muslim spiritual leaders in support of Ankara has exposed in-house divisions in Christian communities. 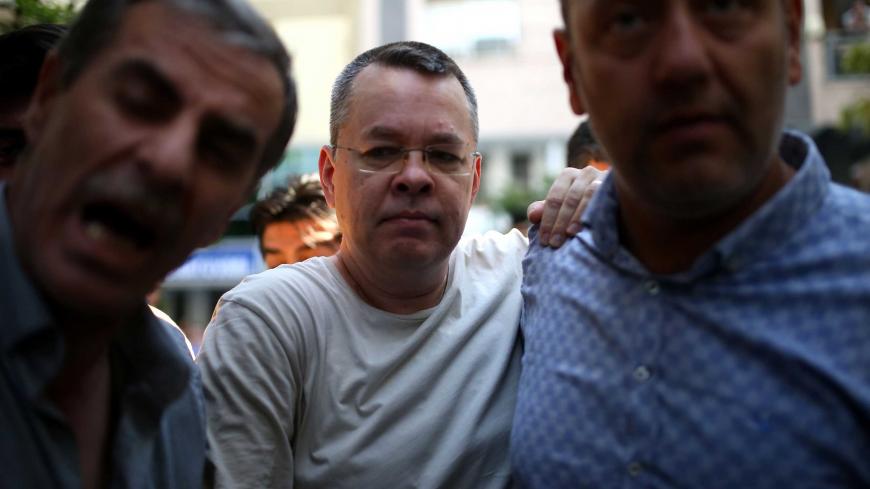 US Pastor Andrew Craig Brunson (C) is seen being escorted by Turkish plain clothes police officers as he arrives at his house in Izmir, Turkey, July 25, 2018. - STRINGER/AFP/Getty Images

As the United States piled pressure on Turkey over a detained American pastor, the leaders of Turkey’s Christian and Jewish minorities issued a joint declaration July 31 asserting they enjoy religious freedom in the Muslim-majority country. The declaration may have pleased Ankara as a show of support in the row with Washington, but has triggered controversy and objections with the minorities themselves.

Signed by 18 spiritual and community leaders, the declaration said, “As the religious representatives and foundation administrators of ancient communities of different religions and faiths that have been rooted in this country for centuries, we are free to live out our faiths and practice our worships in line with our traditions. Statements alleging and/or alluding to oppression are completely untrue and go beyond purpose.”

Agos, the newspaper of Turkey’s Armenian community, ran a sarcastic headline that roughly translates as “Lo and behold, we have been free but we didn’t know it.” Asked why they chose such a headline, the paper’s editor-in-chief Yetvart Danzikyan told Al-Monitor, “They say there are no obstructions to our worships. Then why do the police stand guard at the door when Armenians in particular hold services in their churches? The declaration does not fully correspond to reality.”

Garo Paylan, an Armenian parliament member for the Peoples’ Democratic Party, was even harsher. “When I read the declaration, I felt once again that all those spiritual leaders are hostages,” Paylan told Al-Monitor.

Referring to the modern Turkish republic, founded in 1923 on the ashes of the Ottoman Empire, he said, “Throughout republican history the spiritual leaderships of the remaining [non-Muslim] minorities have been used as hostages. Only a hostage could sign such a declaration at a time when we are unable to elect our patriarch [due to government interference], religious institutions are denied autonomous status, Armenian foundations are unable to hold elections [due to bureaucratic hurdles] and the great sins committed against us in the past remain unacknowledged. This was a ritual of loyalty and all [spiritual leaders] took part in it.”

The declaration was signed by the representatives of almost all Christian and Jewish communities in Turkey, including Greek Orthodox Patriarch Bartholomew I, the acting Armenian patriarch, Archbishop Aram Atesyan, Chief Rabbi Rav Isak Haleva and acting Syriac Patriarch Yusuf Cetin as well as representatives of smaller groups such as Orthodox Bulgarians and Chaldean Catholics. As such, it was unprecedented.

According to Danzikyan, community leaders have always felt compelled to stay on good terms with the Turkish state. “This has been the case throughout republican history. … Minority representatives feel compelled to be on the state’s side in such [sensitive] situations. The Greek Orthodox representatives have done so in times of problems with Greece and the Armenian ones have done the same at times of controversy over the Armenian genocide,” Danzikyan said.

He stressed, however, “For the first time a declaration was signed by so many minorities. In this context it was a historic one.” For Danzikyan, this in itself casts doubt on the policy of reconciliation that the ruling Justice and Development Party (AKP) has claimed to employ vis-a-vis the non-Muslim minorities. “The AKP government used to say that it is not like the other governments of the republican era and that it wanted to be on good terms with them as the Ottomans did. Yet the fact that so many minority representatives felt compelled to jointly pen such a declaration shows that this is not the case,” he added.

Paylan believes the declaration was issued at the prompting of the government amid the escalation with Washington over Pastor Andrew Brunson, who is being held on disputed charges of collaboration with terrorist groups.

Danzikyan noted, “As an Armenian living in this country, I was dumbfounded when the declaration was released. As I got over the astonishment I grabbed the phone and talked to one of the signatories. I was told that [US Vice President] Mike Pence said there was no religious freedom in Turkey, and that the declaration was penned in response to his statement. I was not aware of such a statement. They sent me the speech. Pence was talking about 'one victim of religious persecution, an American' [Brunson]. I guess a group [within the minority leaders] took it upon themselves to do something and drew up a declaration.”

Pence made the remarks July 26 at an international gathering on religious freedoms. Later in the day, both he and President Donald Trump threatened sanctions on Turkey unless Brunson was released. Washington made good on the threats five days later. As previously reported by Al-Monitor, some Christian community members claimed that it was Ankara that asked for the declaration, but through indirect channels.

A day after the declaration, the spiritual and community leaders of the non-Muslim minorities met with presidential spokesman Ibrahim Kalin, which, according to them, was just a coincidence. At the meeting, they raised an array of ongoing problems, including the continued closure of the Greek Orthodox theological school, which prevents the training of clergy, the authorities’ failure to return confiscated community properties and legal hurdles blocking the holding of elections at community foundations, which is crippling their activities.

If so many problems persist, does this not contradict the “freedom” declaration?

Al-Monitor put the question to Atesyan, the Armenian spiritual leader who was among the signatories of the declaration and one of the participants at the meeting with Kalin. He argued that the fact that some problems persist did not mean that non-Muslim minorities were deprived of religious freedom in Turkey.

“In the meeting with Ibrahim Kalin, we raised our problems. We frequently do that. Yet those problems are one thing, freedom of religion is another,” Atesyan said. “Some of our problems have been resolved under the AKP [Justice and Development Party] and some of them have not. And we continue to raise the unresolved ones.”

Asked about the criticism directed at the declaration, he said, “We spoke the truth in the declaration. We have freedom of religion. … There is criticism and there always will be. Those who are against the state, against the government and against us would say the opposite."