Non-Muslim religious leaders in Turkey cannot agree on whether to back efforts to get their personnel on the state payroll, which already supports the country's Muslim clergy. 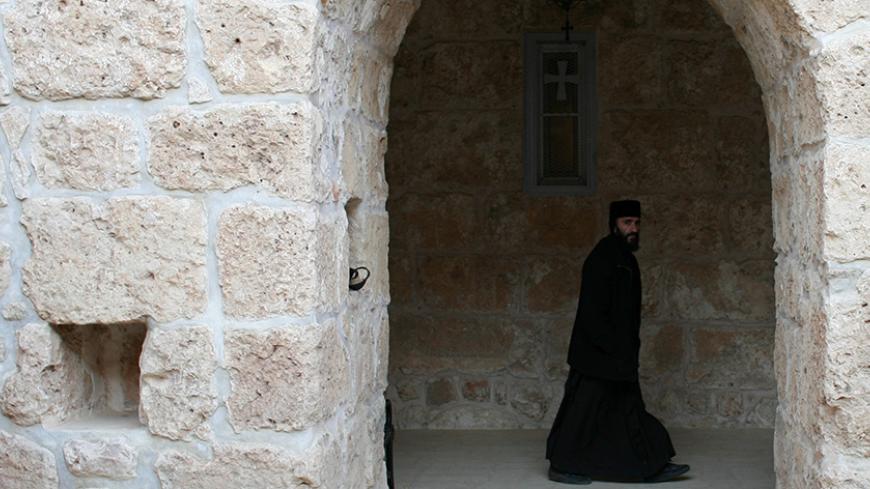 A Syriac Christian monk walks to attend a service at the ancient monastery of Mor Gabriel, in Mardin province of southeast Turkey, Jan. 13, 2009. - REUTERS/Umit Bektas

When Turkey’s official Religious Affairs Department, the Diyanet, denied a request from the Boyacikoy Yerits Mangonts Church Foundation to pay salaries to Christian clergy in Turkey, the move was challenged by the country's chief ombudsman, who asked the Prime Ministry to pay salaries to non-Muslim clergy. The Prime Ministry has not made a decision known, but non-Muslim clergy members are clearly delighted with the proposal.

Salaries for non-Muslim clergy entered the Turkish agenda after the foundation's first application in 2013. In the document, the foundation said it was trying to survive with donations and revenues from funeral services, a mere 4,000 liras ($1,300) in 2012. It asked for its clergy be paid salaries by the Diyanet, as is Turkey's Muslim clergy. The Diyanet, which rules over about 100,000 religious affairs officials and clerics, refused.

The foundation then took its complaint to the ombudsman, saying, "There is no clause in the constitution that says the religion of this country is Islam and only Muslims can benefit from services. The Diyanet’s attitude contravenes the constitutional principle of equality.”

The ombudsman then asked for opinions from the Diyanet and the Finance Ministry. Both opposed the payment of salaries to non-Muslim clergy. Nevertheless, the ombudsman insisted on payment. In its Dec. 31 letter to the Prime Ministry, the ombudsman said the Treaty of Lausanne had guaranteed that non-Muslim Turkish citizens will benefit from the same civil rights as Muslims and “All people living in Turkey will be equal before the law without any discrimination." The letter asked for measures to eliminate such discrimination when addressing the social needs of non-Muslim citizens.

Prime Minister Ahmet Davutoglu will make the final decision. While Turkey awaits his decision, not all minority community leaders like the idea.

No doubt financial problems are one of the main motivations behind the request for salaries. For example, the Chief Rabbinate of Turkey wrote to the ombudsman, “Because of scarcity of funds, not enough religious personnel can be employed in houses of worship.”

But some other communal leaders say this financial problem cannot be solved by paying salaries and needs more comprehensive measures. Istanbul’s Greek Orthodox Ecumenical Patriarch Bartholomew made this point in his consultations with the ombudsman. After meeting the Armenian Patriarchate, Turkey's Chief Rabbinate and the Syriac Orthodox Church, Bartholomew conveyed their joint opinion to the ombudsman: “As our religious personnel are subject to a hierarchical and traditional structure and administration as stipulated by the Christian and Jewish religions, we have concluded that it will be more appropriate if the financial contribution from the state is made directly to our institutions and allows us to use it as we see fit.”

In his letter to the ombudsman, acting Armenian Patriarch Aram Atesyan said they want to preserve the community tradition of paying the salaries of the religious leaders. Atesyan said the Boyacikoy Church Foundation that started the whole debate was not authorized to do so on any other group's behalf.

In response, the foundation's chairman Nazareth Ozhasakyan said, “The question is not whether the state pays the salaries of our personnel or not. After our application, the ombudsman met in Istanbul with the Patriarchate and the Rabbinate. That is what was important for us: recognition of our rights.”

The debate has exposed that the Diyanet has discriminatory practices for Muslims and non-Muslims. According to 2010 budget figures, the Diyanet employs 100,000 religious officials and the state pays their salaries. Non-Muslim clergy is paid nothing. The Diyanet is discriminatory not only toward non-Muslims, but also against all other sects except Sunnis. For example, Alevi religious leaders, "dedes," are not paid.

Problems also prevail in opening houses of worship. While there are 85,000 mosques in Turkey, non-Muslim communities are not allotted space for their own centers. The "cemevi," the Alevi house of worship, is not even considered a house of prayer.

Then there are utilities and services for these places of worship. While municipalities pay the water and cleaning expenses of mosques, non-Muslims may benefit from such services to the extent they develop relationships with local administrations. For example, the Antalya Muratpasa and Diyarbakir Metropolitan municipalities are two that regularly provide cleaning services to churches and cemevis.

Although some non-Muslim leaders are not happy with the proposal to pay salaries to their personnel, the debate has become useful in exposing the discrimination in this area.