US cuts millions of dollars' worth of aid to Palestinians

The United States continues to cut funds that had been designated as aid for the Gaza Strip and West Bank, this time withholding hundreds of millions of dollars. 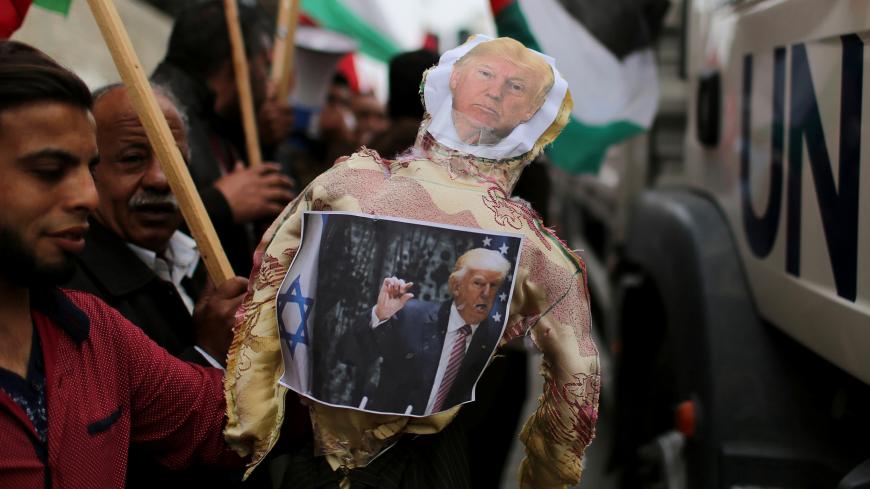 Palestinian demonstrators hold an effigy depicting US President Donald Trump to be burnt during a protest against US aid cuts, outside the United Nations' offices, Gaza, Feb. 11, 2018. - REUTERS/Ibraheem Abu Mustafa

GAZA CITY, Gaza Strip — The US State Department has announced plans to cut $200 million in aid for Palestinians this year. These funds are to be redirected to high-priority projects elsewhere, the State Department said, giving no further explanation.

A senior State Department official told Reuters Aug. 24, “We have undertaken a review of US assistance to the Palestinian Authority (PA) and in the West Bank and Gaza to ensure these funds are spent in accordance with US national interests and provide value to the US taxpayer.”

He added, “As a result of that review, at the direction of the president, we will redirect more than $200 million in [fiscal year] 2017 Economic Support Funds originally planned for programs in the West Bank and Gaza.”

The United States had approved in its 2017 budget, which ended Sept. 30, financial grants to Palestinians worth $359.3 million. Most of the US aid is directed through international and US institutions, such as the UN Development Program (UNDP) and the US Agency for International Development (USAID), to finance projects for good governance, health, education and civil society. A small part of the aid goes to support Palestinian security services in the West Bank.

Such US cutbacks began after US President Donald Trump signed the Taylor Force Act in March, prohibiting the State Department from transferring financial aid to the PA — under the pretext that the latter uses it to pay salaries to the families of the perpetrators of armed operations in Israel.

In January, the United States withheld $65 million of $125 million it provides annually to Palestinians through the UN Relief and Works Agency for Palestine Refugees (UNRWA).

Ahmed Majdalani, a member of the PLO Executive Committee, told Al-Monitor that the US decision is unfair and reveals the Trump administration's double standards when it comes to Palestinians.

The bulk of the money cut had been allocated to projects of relief and infrastructure in the Gaza Strip. “How are we supposed to perceive the efforts that US envoys to the Middle East, Jared Kushner and Jason Greenblatt, are making to help the Gaza Strip economically; while at the same time we have the Trump administration reducing aid for infrastructure projects there?” he said.

Mahmoud called on the international community to shoulder its responsibilities in politically and financially supporting the Palestinian people. The infrastructure projects the US aid was supposed to fund will be suspended, particularly in the Gaza Strip, he said, noting that the Palestinian government can't implement these projects in light of the financial deficit it suffers, despite the fiscal austerity plan it follows.

The Palestinian budget for 2018 has a financial deficit of $1.8 billion, which has significantly increased now with the US cuts. In addition, Israel has cut hundreds of millions of dollars from the Palestinian clearing funds, claiming these funds were given as salaries for Palestinian prisoners in Israeli prisons. Further increasing the deficit, Arab countries such as Saudi Arabia and the United Arab Emirates have reduced financial assistance to Palestinians.

“This decision will have a devastating impact on Palestinians and brings us no closer to peace. The US should be supporting a diplomatic path toward a two-state solution,” US Rep. Barbara Lee, D-Calif., tweeted Aug. 27.

On Aug. 24, Sen. Patrick Leahy, D-Vt., tweeted, “Inhabitants of Gaza are already suffering severe hardships under the tyranny of Hamas and border restrictions imposed by Israel. It is the Palestinian people, virtual prisoners in an increasingly volatile conflict, who will most directly suffer the consequences of this callous and ill-advised attempt to respond to Israel’s security concerns.”

Omar Shaban, an economist and director of Pal-Think for Strategic Studies in Gaza, told Al-Monitor the US decision to reduce support to the Palestinians was made several months ago but only announced Aug. 24. He explained that many Western institutions in the Palestinian territories, such as UNDP and USAID, had dismissed many local employees and suspended a good number of partnerships with nongovernmental organizations, some humanitarian assistance programs and temporary employment programs.

Shaban stressed that the US financial cuts will worsen the economic crisis in the Palestinian territories and lead to higher unemployment rates among young people, especially since part of that money was directed to temporary employment projects for youth.

Now Palestinians must promote self-financing and adopt a more severe austerity policy. They also will have to strengthen cooperation with friendly countries to compensate for the lost US funds, Shaban added.

“It's true that the $200 million cut will not directly affect the Palestinian government’s budget, but it will fan the flames on the economic burdens on Palestinians and suspend many of the projects that were provided through US institutions,” he noted.

Shukr expects US political and financial pressure on the Palestinians to increase in the coming months, as the Palestinian leadership still rejects the nebulous US peace plan.

Palestinians continue to suffer under difficult financial and economic conditions in the West Bank and Gaza Strip due to Israeli restrictions and lack of Western and Arab support for them, while UNRWA has reduced its services in the Palestinian territories as a result of declining support.