Tensions and disputes are tearing apart both the ruling coalition and the opposition, a sure sign that the Israeli political system expects early elections. 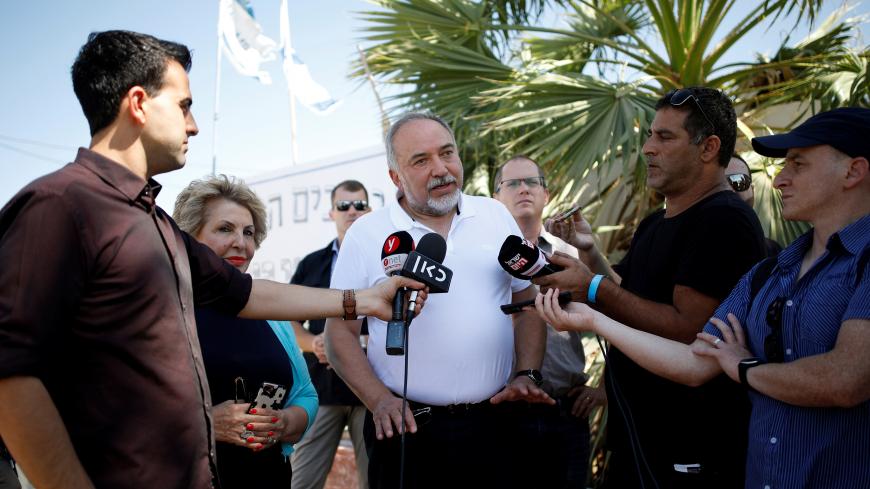 Israeli Defense Minister Avigdor Liberman visits the southern Kibbutz of Or HaNer, on the Israeli side of the Israel-Gaza border, July 27, 2018. - REUTERS/Amir Cohen

On July 27, Defense Minister Avigdor Liberman brought the members of his Knesset faction on a visit to the kibbutzim surrounding the Gaza Strip. At Kibbutz Or HaNer, the Yisrael Beitenu chairman met with local residents who are frustrated after many long weeks of flaming kites destroying their fields and ruining their children’s summer vacations.

Liberman sent the message that he is not afraid of taking the conflict with Hamas up a notch, making statements like, “If we get Code Red sirens here, it’ll get deep red in Gaza."

Liberman and his staff have been making many such comments online and to journalists. During their visit to the south, the faction also held a private meeting in the restaurant on Kibbutz Bror Hayil. That evening, the News Company reported on a clash between Liberman and Prime Minister Benjamin Netanyahu at a Cabinet meeting a few days earlier. Liberman wanted to deal a harsh military blow to Gaza, but Netanyahu blocked it.

According to the report, Liberman used the faction meeting to give his own account of the tension between himself and Netanyahu. He has a reputation for creating crises for his own political ends, so it is certainly safe to assume that the current one is another example. Liberman wants to present himself as taking a much more aggressive stance against Hamas than Netanyahu is, particularly since voters currently give the government low marks on this issue. According to a July 24 poll by the News Company, 70% of the public is unhappy with the way the flaming kites from Gaza are being handled by the government.

Liberman may sit in the Defense Ministry, but most people still do not consider him an authority on security matters. He is therefore trying to use the Gaza crisis to boost his standing. He will continue fighting with Netanyahu on this issue as long as it serves his interests.

Meanwhile, all signs on the ground seem to indicate that Liberman is preparing for early Knesset elections, as are all the other key players. His highly publicized clash with Netanyahu — the first of its kind since he became defense minister in May 2016 — is further evidence. Officially, the prime minister’s office denies any dispute, but a source close to Netanyahu has been quoted in the Israeli press as saying, “Liberman is a big talker but his actions are very much the opposite.”

All this happened one week after the Knesset began its summer recess July 22. While the coalition is still intact, there are still a lot of unresolved tension and conflicts that could come to a head when the Knesset begins its winter session Oct. 15. Then, many believe, some excuse will be found to dissolve the Knesset and the country will head to early elections. Since none of the major players want to be caught off guard, they launched their 2019 campaigns last week, even if unofficially.

Kulanu's chairman, Finance Minister Moshe Kahlon, was the quickest and also the most direct. Last week he hosted a festive inauguration of his election headquarters in Tel Aviv and plastered the streets with campaign posters.

But that was just the beginning. On July 29, hundreds of thousands of readers of Yisrael HaYom, the free newspaper owned by Sheldon Adelson and usually identified with Netanyahu, came across a very unusual headline. It was actually a huge ad in disguise that took up the entire front page. It contained a long list of achievements attributed to Kahlon, drawn from every imaginable field: security, healthy and education. Kahlon's boasting about achievements far beyond his own finance domain infuriated the other ministers, who claimed that he was taking credit for things that he did not do. “He always complains that Netanyahu does that to him, but now that he is facing election pressure, he is doing the exact same thing,” one Likud minister told Al-Monitor on condition of anonymity.

Kahlon isn’t too worried. In talks with his associates he expressed his belief that sometime in October, Netanyahu will find an excuse to hold an election before any recommendation to indict him is made.

What will be the excuse for dissolving the government? Netanyahu has several options. In any case, he is acting as though he is preparing for early elections. He refuses to change the controversial recently adopted nationality law despite growing protests among the Druze community, because the new law is popular with Likud voters and Netanyahu believes that it will be a banner issue in his upcoming campaign. As he prepares to face off against HaBayit HaYehudi leader Naftali Bennett, with whom he will be competing for the right-wing vote, Netanyahu will try to resolve the problem with the Druze protests through dialogue, economic incentives and point-specific legislation, but he will not back down from the law. On the contrary, the Likud leader is already marketing the new law aggressively. A new video he posted online goes so far as to accuse the left of disseminating lies about it.

Then there are the LGBT protests over the last few weeks over the amended surrogacy law, which discriminates against gay men. Here, too, Netanyahu is not expected to surprise anyone with an about-face on policy. With elections in the offing, Netanyahu will not risk his alliance with the ultra-Orthodox parties, which he will need to put together his next government. Netanyahu will need to be fully confident that the ultra-Orthodox parties will continue be his partners if he forms his fifth government.

If any more evidence is needed to prove that elections are on the way, a quick glance at the Zionist Camp should suffice. While it is now the main opposition party, polls give it just 15 seats on a good day, and its nervous members are squabbling among themselves.

On July 30, Zionist Camp Knesset member Eitan Broshi announced that he will sue the party's chairman, Avi Gabbay, for slander. Gabbay recently called Broshi a sex offender in relation to a Channel 10 news report about a sexual assault that allegedly occurred 15 years ago. Broshi got into trouble again this week, facing allegations that he touched the rear end of a female Knesset member from his party. Nevertheless, he believes that his political rivals are behind the reports in an attempt to destroy his career.

The announcement by Zionist Camp Arab Knesset member Zouheir Bahloul that he will leave the parliament to protest the nationality law can also be seen as a warning to the party, which did not do enough to prevent the law from passing. Each of these developments have colored the mood in the party and the Knesset at large. Everyone is wary of everybody else, and everything seems to be falling apart.