Thousands of mainly ethnic Balochs are deprived of access to basic government services in Iran as they are formally stateless without state-issued ID cards. 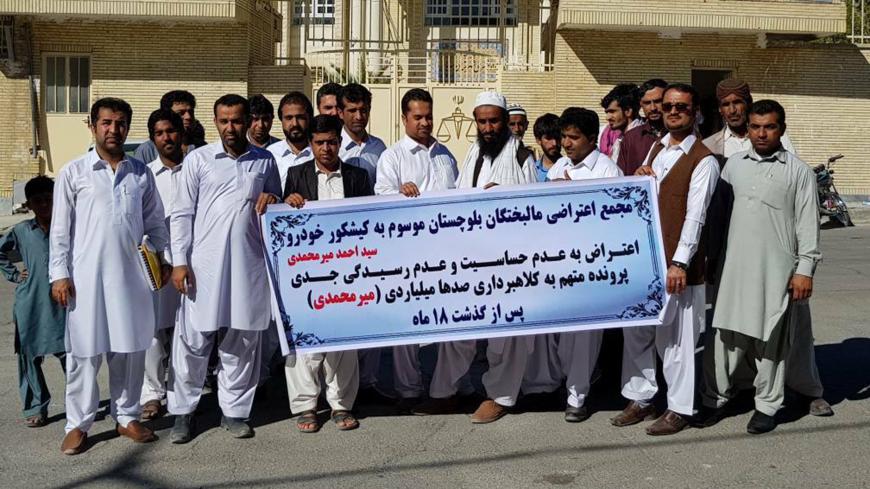 Five-year-old Alireza Pourdad was scared, lying in a hospital bed in the burn ward between two adults who had been burned beyond recognition. Alireza had been injured in a blaze in his parents’ tent in a shantytown outside the Iranian capital in May 2012, and was in critical condition.

Alireza’s parents are ethnic Balochs from Iran's southeastern province of Sistan and Baluchestan, near the border with Pakistan and Afghanistan. Like many others in Iran — most of them Balochs — who have no identity cards for legal and historical reasons, they had left their hometown 15 years earlier in search of work. As day laborers, the couple traveled between Tehran and Gorgan near the Caspian Sea throughout the year looking for seasonal work. Because they lacked the ID cards necessary to rent a home and access government services such as monthly cash subsidies and education, they were left living in deplorable conditions on Tehran's outskirts. To add to their misery, the police conducted raids there a few times a year in efforts to clear the area of stateless families, leaving tents burned and residents beaten.

Without ID cards, Alireza's parents, Maryam and Nader, had no way of proving that Alireza was their child, and so were refused entry to the hospital once he was admitted and they had returned from searching for work. The security guards reported the parents to the police, who arrested them promptly on suspicion of being illegal Afghan immigrants. It would take six months before they were released.

Zohreh Sayadi, a children's rights activist, spent time with Alireza at the hospital and read him stories. Sayadi, an ethnic Baloch herself, for the past two years had been commuting between Tehran and the shantytown, engaging with families and teaching children how to read and write.

“One day as I was reading 'The Ugly Duckling' to Alireza,” Sayadi said. “He raised his head and said, ‘I am tired,’ and then he died.” In a photo given to Al-Monitor, Alireza is seen wearing a green sweater and looking into the camera holding a toy — a duckling. The photo is inscribed with the words: “Date of death: 18/6/2012.”

Like Alireza's family, the overwhelming majority of Balochs in Iran live in Sistan and Baluchestan province, but the ethnic group spans across international borders. Balochs can be found in great numbers in Pakistan, Afghanistan and Iran. In the early 20th century, when Iranian rulers tried to bring the vast country under the authority of the central government, many in the remote province resisted such efforts. In many poverty-stricken areas in the province, the central government was generally absent. People saw no reason to travel hundreds of miles, in some cases, from their villages to obtain identity cards, which back then provided no meaningful benefit. Rather, for local men, an ID card chiefly meant they would be conscripted for military service.

“Balochs are very honest people and many saw no reason to hold a piece of paper to prove who they are,” said Sayadi, who has worked with stateless Balochs for more than eight years. “We have had this problem in the areas of Ahvaz [in southwestern Khuzestan province] and Kurdistan to a lesser extent, but their problems are almost resolved.”

Since the 1980s, more than 1 million people have emigrated from Sistan and Baluchestan province due to a lack of government investment, trying to escape poverty as well as environmental disasters such as flash floods and dust storms.

“There are two groups of people with identity [card] problems,“ said Habibollah Sarbazi, head of the Baloch Campaign, an organization that tracks human rights abuses in Sistan and Baluchestan. “One group has no identity cards at all and the other group is made up of those who at one time had identity cards but whose cards were taken away by state institutions based on the suspicion that they are not Iranians.” Many of those with disputed identities are deported to Afghanistan, according to Sarbazi and Sayadi.

Many stateless individuals have difficulty understanding the complex bureaucracy. Those who successfully apply for ID cards can end up waiting as long as 20 years before receiving a clearance from bureaucrats and security officials. Many applicants also complain that government bureaucrats who often come from other parts of the country have difficulty understanding the local linguistic and cultural intricacies. “This lack of knowledge could change the trajectory of a family’s life by labeling them as having a ‘disputed identity,’” Sayadi noted. “The process of proving your identity is also very costly. A simple DNA test in Tehran costs 700,000 tomans [about $166] and most stateless Balochs can't afford to pay this fee.”

The head of the Sistan and Baluchestan registration office, Reza Rahat Dahmardeh, said in July 2017 that the issues faced by those without identity cards would be resolved in months. Dahmardeh noted the office reviewed the cases of 7,000 families and subsequently issued 23,000 identity cards. He said then that the office hoped to review the 2,000 remaining cases by March 2017. But activists and journalists say issues persist despite the government’s efforts.

“There are people whose identity as Iranians has been determined through DNA tests, but they [still] have no identity card,” Ehsan Biazar Tehrani, head of the Association of Revolutionary Preachers, said Aug. 10 after a visit to the province. “No solution has been sought for them. They have no medical insurance and receive no subsidies.”

“It is horrific to be labeled as having a ‘disputed identity,’” said Sarbazi. “It leads to the destruction of the family and their lives.”

There is no accurate official data available on how many people from Sistan and Baluchestan province are stateless or have disputed identities. Sayadi said in this regard that the number is in the tens of thousands.

After Alireza’s death, Sayadi and other activists intensified their efforts to assist the stateless children in the shantytown on the outskirts of Tehran. Two years ago, Maryam Pourdad gave birth to another son, and like Alireza, he is stateless, too.