Though US President Donald Trump is already claiming his share of headlines at the NATO summit, much of the world is waiting to get a look at Turkish President Recep Tayyip Erdogan's foreign policy approach now that his office has been granted expanded powers with his July 9 inauguration. 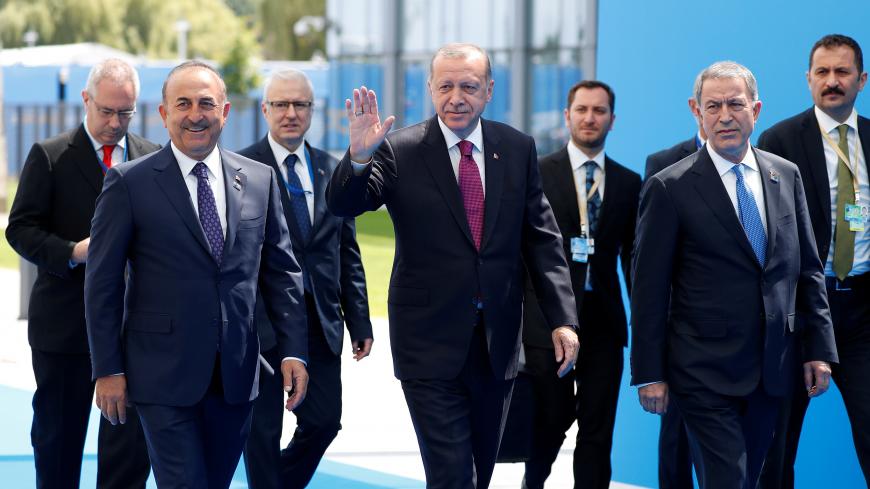 Venezuelan President Nicolas Maduro describes his close friend Turkish President Recep Tayyip Erdogan as a “leader of the new multipolar world.” Maduro has been enthusiastically tweeting Erdogan's praises since July 8. Though Maduro may not be a good example of a statesman with wide international stature and prestige, his characterization of Erdogan is quite accurate.

Erdogan’s July 9 inauguration might as well have been called a coronation with all the pomp that surrounded it. In addition to Maduro and the leaders of Pakistan, numerous countries in Africa, the Balkans, Southeast Europe and some of Turkey’s immediate neighbors, Russian Prime Minister Dmitry Medvedev attended, plus old friends of Erdogan — former Italian Prime Minister Silvio Berlusconi and former German Chancellor Gerhard Schroeder.

But what was puzzling was the lack of Middle Eastern representation at the ceremony. The Gulf region was represented by the Qatari emir, but very few leaders from the region attended. Nechirvan Barzani, prime minister of the Kurdistan Regional Government, was in Ankara for the occasion, following the tense period created by the Kurdish independence referendum. Yet, curiously, his name was not mentioned in the official guest list, nor was his attendance reported by pro-Erdogan media outlets.

All the fanfare and the long list of international dignitaries could not conceal the very significant and conspicuous absence of the key leaders of Western Europe. Those who weren't invited or didn't attend are now with Erdogan in Brussels for the July 11-12 NATO summit, which is expected to be the first real test of Erdogan's foreign policy leanings.

Marc Pierini, a former Turkish ambassador to the European Union and a respected analyst, said the ties between Turkey and the EU have reached an irreversible point.

“There is no doubt in Europe (and possibly in Ankara too) that the bridges between Turkey and the EU have been burned — both on substance, with the massive deterioration of the rule of law in Turkey and at the personal level, with Erdogan’s repeated assaults on EU leaders in the past year and a half. No warm embraces can be expected on the margins of the NATO summit,” Pierini wrote in a July 9 piece for the Carnegie Middle East Center.

Pierini is certain that EU leaders didn’t welcome Erdogan’s executive presidency, yet he is unsure what the new era will bring to Turkey’s foreign policy. “The foreign and security policy that Erdogan will be able to conduct is difficult to predict. It will almost certainly prove to be a delicate juggling act, with vast implications for the United States, Russia, the European Union and the Middle East," he wrote.

An important and controversial agenda item at the NATO summit will be Turkey’s procurement of Russian S-400 missile defense systems, which are said to be incompatible with NATO systems, making it unthinkable for a NATO member country to acquire them. The deal endangers the purchase of 100 US-made F-35 stealth aircraft, and Congress appears outraged by Erdogan’s insistence on the Russian deal. Analysts tend to think that at Brussels, the United States and NATO might raise to Erdogan the question, "Whose side are you on?"

There are numerous analyses, tainted by wishful thinking, that expect Erdogan to be cornered and thereby weakened by the Western world. Although it's apparent that Erdogan is walking a tightrope, it's too far-fetched to think of this NATO summit as a match point for his (and therefore Turkey’s) stature in the trans-Atlantic alliance.

First of all, the Brussels summit is a venue for the display of differences between US President Donald Trump and NATO’s Western European allies more than anything else. It started with Trump’s lecture to NATO Secretary-General Jens Stoltenberg on defense spending, which was already a bone of contention. Apart from that, the face-to-face encounter between Trump and Russian President Vladimir Putin will overshadow other problematic issues that may arise.

Moreover, NATO itself is keen to pamper Turkey regardless of Erdogan’s emergence as “leader of the new multipolar world,” a euphemism for the developing world. Stoltenberg said in an online interview July 9 that Turkey will play an essential role in NATO’s security enhancement efforts, which will include creating two new commands across the Atlantic and within Europe. “In all of these efforts, Turkey's contributions will be essential,” he said.

Although he referenced Turkey’s S-400 deal with Russia with critical undertones, he did not miss the chance to emphasize Turkey’s highly valued place in NATO.

“Turkey makes many contributions to our shared security,” Stoltenberg said, reassuring in the interview that NATO's relationship with Turkey will remain intact.

A shrewd politician and a veteran international player like Erdogan certainly didn't miss what Stoltenberg was implying. Erdogan is well aware of the limitations of Turkey’s Western allies as much as his own restraints.

He could still play upon the delicate balancing act between Russia and NATO for the foreseeable future. In this regard, the Brussels summit can't be considered a turning point or a milestone in Turkey’s relations with the West. Erdogan needs both Russia and the West; he can't sacrifice either one.

He won't fail in his first foreign policy exam, and after Brussels, rest reassured that Turkey and NATO will remain intact.