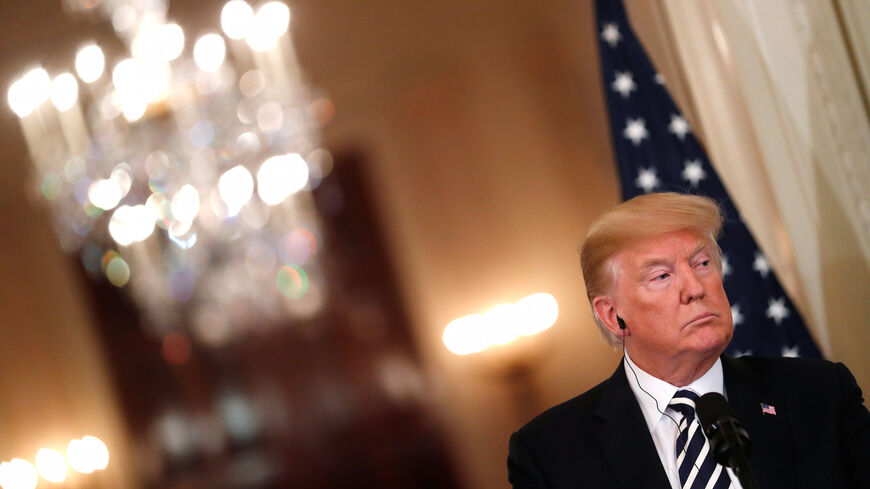 President Donald Trump listens to a question as he holds a joint news conference with Italian Prime Minister Giuseppe Conte in the East Room of the White House in Washington, July 30, 2018. - REUTERS/Carlos Barria

WASHINGTON — A week after warning him in an all caps-tweet against military threats, US President Donald Trump said today he’d be willing to meet with Iran’s President Hassan Rouhani anytime Iran wants, without any preconditions.

“I would certainly meet with Iran if they wanted to meet,” Trump said at a White House news conference with Italian Prime Minister Giuseppe Conte.

Trump said he’d be interested to discuss a possible substitute arrangement for what he called the “ridiculous” Iran nuclear deal that he withdrew the United States from in May. He acknowledged that Iranian leaders may not be prepared to meet him yet, but said he thinks eventually they will come around.

“I don’t know that they’re ready yet,” Trump said, noting that he “ended” the Iran deal, which five other world powers and Iran are scrambling to try to preserve as the United States moves to reimpose economic sanctions on Iran’s energy and banking sectors. But, he said, “I do believe that they will probably end up wanting to meet and I’m ready to meet anytime that they want to.”

“I don’t do that from strength, or from weakness,” Trump added. “I think it is an appropriate thing to do. If we could work something out that’s meaningful, not the waste of paper that the other deal was, I would certainly be willing to meet.”

Trump’s expressed willingness to meet Iranian leaders without any changes in Iranian behavior ahead of time stands in stark contrast with the messaging from the rest of his administration, which has been urging other nations to reduce their import of Iranian oil to as close to zero by Nov. 4 as possible.

Secretary of State Mike Pompeo, in particular, has repeatedly cheered on Iranian protests against the regime, and laid out a list of a dozen broad changes in Iran’s posture in the region and domestically that would be required before the Trump administration would pursue dialogue with the Iranian regime.

“The president has said if we can get this change, if we can get the leadership to make a strategic decision about how to ensure its well-being and the well-being of its peoples, that we’re prepared to have a conversation and to discuss how that might proceed,” Pompeo said in a speech to the Iranian American community at the Ronald Reagan Presidential Library in California on July 22.

“The president has stated at least once, perhaps more than once, that he is prepared to do that with the leadership in Iran, but not until such time as there are demonstrable, tangible, irreversible changes in the Iranian regime that I don’t see happening today,” Pompeo said. “But I live in hope.”

But Trump repeatedly said in his remarks today that he does not have any of the preconditions of changed Iranian behavior that Pompeo asserted would be required for dialogue.

“No preconditions. If they want to meet, I’ll meet, anytime they want,” Trump repeated.

But while Trump said he would meet Iran with no preconditions, Pompeo, speaking to CNBC after Trump’s remarks today, insisted that he and Trump were on the same page.

“We've said this before," Pompeo told CNBC’s “Closing Bell” today. The "president wants to meet with folks to solve problems. If the Iranians demonstrate a commitment to make fundamental changes in how they treat their own people, reduce their malign behavior, can agree that it's worthwhile to enter into a nuclear agreement that actually prevents proliferation, then the president said he's prepared to sit down and have the conversation with them."

Trump, in fact, requested a meeting with Iran’s Rouhani during the gathering of the United Nations General Assembly in New York last year, but the Iranians declined, US and Iranian experts have said. The US request was channeled via Tom Shannon, then the undersecretary of state, to his Iranian counterpart, on very short notice, after Trump had given a blustery anti-Iran speech to the General Assembly, said Suzanne DiMaggio, of the New America foundation, who has convened Track II dialogues between Iranian diplomats and American policy experts for over a decade.

Now, with the United States having withdrawn from the Iran nuclear deal and moving to impose sanctions while Iran continues to comply with the deal, it will be very hard for the Iranians to agree to a meeting, Iranian experts said.

“Why would the Iranians negotiate with an administration that is internally inconsistent?” Ali Vaez, senior Iran researcher at the International Crisis Group, told Al-Monitor today. “Should they believe Pompeo's 12 preconditions or the president's unconditional proposition?”

“At this stage, no Iranian leader can afford to negotiate with a gun to their head,” Vaez said. “The president [Trump] might find the allure of the mother of all deals with Iran irresistible, but no one in his entourage wants a deal that would benefit Iran.”

“Trump's threats and insults have rendered him toxic in Iran,” Vaez added. “I don't think Rouhani has the political capital to engage again.”

In one of the first official Iranian responses to Trump’s offer, Hamid Aboutalebi, an adviser to Rouhani, tweeted that Iran has preconditions for any meeting with the United States. “Respect for the great nation of Iran, reducing hostilities and a US return to the nuclear deal... [that’s what’s required] to ease this challenging path that we are facing today,” Aboutalebi tweeted.