As Moscow pulls out troops from Syria, Putin is pressed at home to legalize private military companies and come clean about Russain mercenaries' role in Syria. 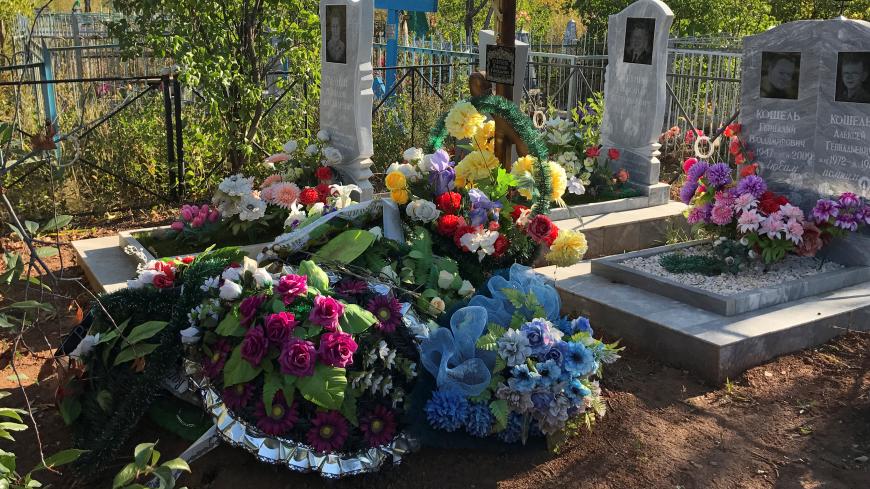 The grave of Russian private military contractor Vladimir Kabunin, who was said to have been killed in Syria, is seen at a cemetery, Orenburg, Russia, Sept. 20, 2017. - REUTERS/Maria Tsvetkova

Russian war veterans are demanding that President Vladimir Putin take adequate steps to legalize private military companies. In a statement sent to the Russian leader, the veterans demanded not only the legalization of these private soldiers, but also an official recognition that Russian contractors are involved in the Syrian conflict.

The veterans sent the document to the presidential administration as well as to Russia’s Supreme Court. The statement had been signed by a group of veterans, including retired Col. Gen. Leonid Ivashov, the former head of the Defense Ministry’s Directorate General for International Military Cooperation (1996-2001); Vladimir Petrov, the head of the Honor and Homeland international public organization; and Evgeny Shabaev, the committee chairman of the Russian Officer Congress. The statement stressed that over the course of three years, veterans' organizations had been receiving complaints from soldiers wounded in Syria who do not have access to the government’s social, rehabilitation and economic support as they do not have any legal status.

The issue of legalizing these mercenaries has been a topic of discussion in Russia for many years. Currently, private contractors’ activities are outlawed by an article of the Russian Criminal Code prohibiting mercenary groups. The private soldiers are not recognized as war veterans and can’t enjoy similar privileges. Russian politicians have long been involved in lengthy, fruitless debates about negative and positive consequences of the legalization of mercenaries. Yet when first the war in the east of Ukraine had fired up, and later, when Russia launched its campaign in Syria, the problem became especially pressing.

Sources in Russian veterans' organizations’ claim that private military company officers who are Russian are also operating in the Central African Republic, Sudan, Yemen and Libya. This reportedly includes not only the notorious Wagner Group but, as the veterans' statement mentions, Patriot, a brand-new private military firm.

According to TV Rain, a Russian opposition channel, Patriot has been taking part in fighting in Syria since the spring of this year. Its troops, among others, include the so-called “vacationers” — a term coined during the war in Donbass in Ukraine — professional Russian soldiers found on the battlefield while seemingly in service, without any order from commanders. As Ivashov said, several active specialists of the Main Directorate of the General Staff (Main Intelligence Department), military lawyers and special forces soldiers are known to work for Patriot. A source in the defense ministry told TV Rain that Patriot provides better salaries and more elaborate combat tasks, and is aimed more at guarding individuals, unlike the Wagner Group, which is more frequently involved in warfare itself.

“There are other companies emerging in the market. We do not know their exact names, but we can safely say that they are already present in Libya, Yemen, Sudan and Brunei. Also, major talks about entering several African countries are being held,” Shabaev said.

The Kremlin responded to the statement with seeming due seriousness. Putin spokesman Dmitry Peskov said, “If such a document reaches us via official channels, we will forward it to the Ministry of Defense so that they design some basic approaches to the problem.”

However, in order to understand how likely it is that Russian authorities will actually respond to Shabaev's statement, several points need to be made clear.

First, many political factions use the issue of Russian discreet participation in the war in Syria as a reason to score political points, no matter how deep their knowledge about the problem is. In this particular situation, the initiators of the statement do not act as a united veterans' organization. As The Voice of America accurately observed, this is an interesting mix: Ivashov is a patriotic “statist” expert who has voiced his own personal opinions for a long time; Petrov has been taking part in the leadership of various conservative organizations together with Ivashov for a while; Shabaev is a Cossack activist who in February spoke out about “massive casualties” among Wagner militants in Syria. In 2011, Ivashov was even trying to run as a presidential candidate. To put it simply, Ivashov has been involved in politics for a while, with an aim to project his agenda to numerous scattered veterans' societies and patriotic groups.

Second, it does not make much sense to expect any reaction from an institution that does not officially recognize any private military companies, despite direct interactions with them. For example, the Wagner’s mercenaries reportedly occupy a part of the Defense Ministry’s training ground near Molkino village, where military intelligence units usually are trained.

Moreover, the Defense Ministry is not alone in its opposition to the legalization of these private soldiers. In mid-January, commenting on the capture of two Russians by IS terrorists, Russian Foreign Minister Sergey Lavrov said that “a solid law base should be created to protect these people within a legal framework,” which many took as an endorsement of the idea to legalize the status of the contractors. The same month, Sergey Mironov, leader of A Just Russia party, and his deputy, Mikhail Emelyanov, drafted another bill on the private companies' legalization in Russia. Yet the document was rejected by all the key agencies of the Russian government: the defense, finance, justice and foreign ministries, the National Guard, the Federal Security Service, Foreign Intelligence, the Federal Protective Services and the Prosecutor General’s Office.

The Federation Council further claimed that there are no such companies in Russia whatsoever. Formally, it is accurate since most Russian private military companies are registered in other countries and do not have an official status within the nation, so they can only nominally be considered Russian. For their part, the companies actually registered in Russia, such as RSB Group and LUKOM-A (with Lukoil oil corporation as a main founder and general customer), are seen as private security companies or consulting agencies. So the Wagner Group and similar entities that exist without an official legal status and even without a publicly known name are technically illegal armed units.

According to a source in the armed forces speaking to Al-Monitor, these companies function as hidden instruments to support Russian military intelligence, but their dubious legal experience is unlikely to be directed to the field of politics. These mercenary companies are supposed to have at least remotely transparent document flow; however, in Wagner’s case there are reports that accounting is mostly fraudulent. Nevertheless, most of the mercenaries coming from remote regions of Russia tolerate it. Moreover, the Wagner Group includes foreign nationals, particularly Ukrainians and natives of ex-Yugoslavia countries. The structure of the units is reviewed on a rolling basis: Some sources claim that the “Spring” unit that at first had been designed to sabotage the Ukrainian army behind the lines was later re-formed and sent to Syria because the soldiers did not have sufficient skills for sabotage-type operations.

In Russia, some argue that the country can link private military companies to the legal base of the Collective Security Treaty Organization (CSTO), a post-Soviet military alliance. This measure could bring new life to the structure still suffering from atrophy, in spite of all the official statements and military exercises Russia initiates within it. It is known that the Moscow Institute of Security Problems and Sustainable Development, where some of the staff used to work with the special services and now participate in expert Duma groups, did actually draft such a bill. Still, many questions arise. These include whether, in the absence of a common enemy, the CSTO nations are ready for this step and, most important, whether Russia needs to legitimize these contractors for rather transparent operations within the CSTO, where there’s no need to establish hidden contacts and carry out covert operations such as the groups are doing in Syria.