Iran’s prominent Sunni leader, Molavi Abdul Hamid, sent a letter to Iraqi Shiite cleric Ali al-Sistani requesting that he act as a mediator between Iran's Sunni community and the government. 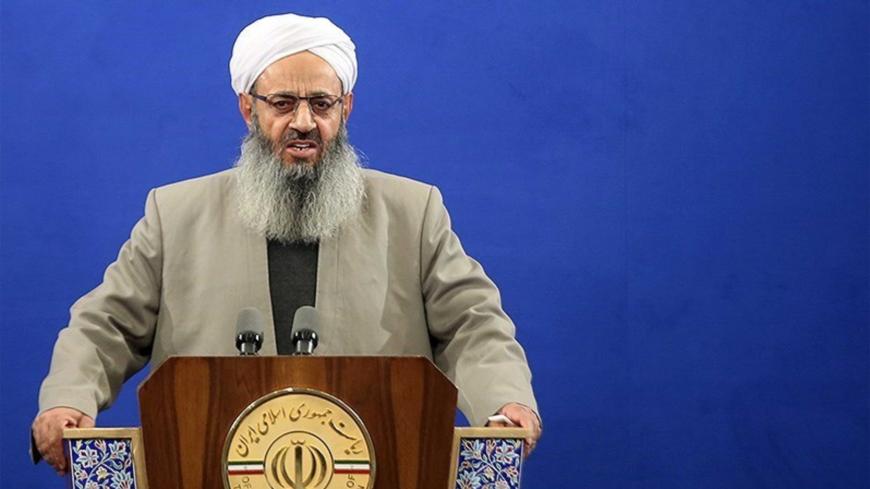 Prominent Iranian Sunni leader Molavi Abdul Hamid sent a letter July 21 to Iraq's top Shiite cleric, Ali al-Sistani, regarding the unequal status of Sunnis in Iran. Abdul Hamid asked Sistani to act as a mediator between Iranian authorities and Iran's Sunni community, with the goal of encouraging the government to adopt fairer policies toward Sunnis in Iran.

Abdul Hamid is based in the southeastern city of Zahedan, the capital of Sistan-Baluchistan province, which borders Pakistan. His political and social activities seek to promote equal citizenship rights for the Sunnis of Iran. He pursues a moderate approach and encourages dialogue that shuns the use of violence.

In his letter, Abdul Hamid wrote that Sunnis in Iran are facing “extreme sectarian discrimination” amid “the absence of religious freedom,” the lack of “Sunni elites in public positions” and “imbalances between Shiites and Sunnis in Sunni areas.”

Sunnis are “prevented from building mosques in Tehran,” he wrote, and “holding Friday and Eid prayers in Tehran and other major cities.”

For decades now, Sunnis have been calling for the construction of a Sunni mosque in Tehran. However, Iranian authorities are impeding such a move, as they fear a Sunni mosque would turn into a political center opposed to the Shiite-led Islamic republic. The Iranian authorities also fear that such a religious center in Tehran would be exploited by Iran’s regional opponents, namely Saudi Arabia.

Abdul Hamid called on Sistani to use his influence to help end the suffering of Sunnis in Iran, which his letter indicated has been occurring for four decades.

The Sunni leader wrote that Sistani's mediation with Iranian authorities would "be an important step toward establishing lasting security and stability in the Muslim world. … This would allow the world to see that when Shiites rule a country, justice will prevail because Shiites do not discriminate against specific doctrines, and this will go down in history.”

Although Abdul Hamid holds a formal position as a Friday prayer leader for Sunnis in Zahedan, he does not enjoy full freedom when it comes to religious activities. Iranian authorities recently banned him from traveling to both the United Arab Emirates and Turkey to visit his parents and participate in religious activities. He has also been banned from traveling to some areas inside Iran as well.

In an interview with the Iranian newspaper Etemad related to the topic of discrimination against Sunnis in Iran, Abdul Hamid said that in Sistan-Baluchistan province, where Sunnis make up 75% of the population, barely 6% of government positions are held by Sunnis.

A source close to Sistani's office told Al-Monitor on condition of anonymity that Sistani is avoiding wading into the issue because it involves controversial political dimensions and because his involvement in such a public action would not improve the conditions plaguing the people in question.

Sistani has maintained a similar approach to the persecution of Shiite minorities in predominantly Sunni countries. When Saudi Arabia executed Shiite cleric Nimr al-Nimr in 2016, Sistani did not criticize Saudi Arabia for the execution. He just settled on sending a condolence letter to his relatives.

When it comes to dealing with religious minorities, Sistani seeks to introduce an approach that differs from the region's religious political regimes, namely Iran and Saudi Arabia. To avoid leaving a negative impression among Sunnis, he avoids directly addressing Shiites in his letters and the speeches delivered by his spokesmen. He has issued several fatwas to prevent radical Shiites from offending Sunnis. Sistani's directives assisted in preventing Shiite militias from attacking Sunnis in Iraq's sectarian conflict in 2006 and 2007, as well as during the liberation of the territories that fell in the hands of the Islamic State.

Iran's Sunnis make up about 15% of the total population, with most of them living in in Kurdistan province in western Iran and in Sistan-Baluchistan. Abdul Hamid is their most prominent religious and political leader.

Abdul Hamid has called for reforms to the Iranian political system and for religious freedom and equality for Sunnis. In his sermon during Eid al-Fitr in June, he called for amending and modernizing the Iranian Constitution, which was drafted more than four decades ago.

Article 12 of the Iranian Constitution stipulates that the official religion of Iran is Islam, specifically, the Twelver or Jaafari school of Shiism. The document says, "This principle shall remain eternally unchangeable," even as other Islamic schools of thought are free to perform their own religious practices.

Abdul Hamid and other Sunni leaders have also called on Iran to stop supporting Bashar al-Assad's regime in Syria, as it targets civilian areas with bombs.

Abdul Hamid's letter to Sistani provides a contrast between Sistani's secular discourse and the rival Shiite discourse of the Islamic Republic of Iran, as Sistani calls for equal citizenship for all while keeping religion separate from the state.