Lack of financing and the potential collapse of the nuclear deal threaten Iranian plans to complete the infrastructure necessary for the International North-South Transport Corridor. 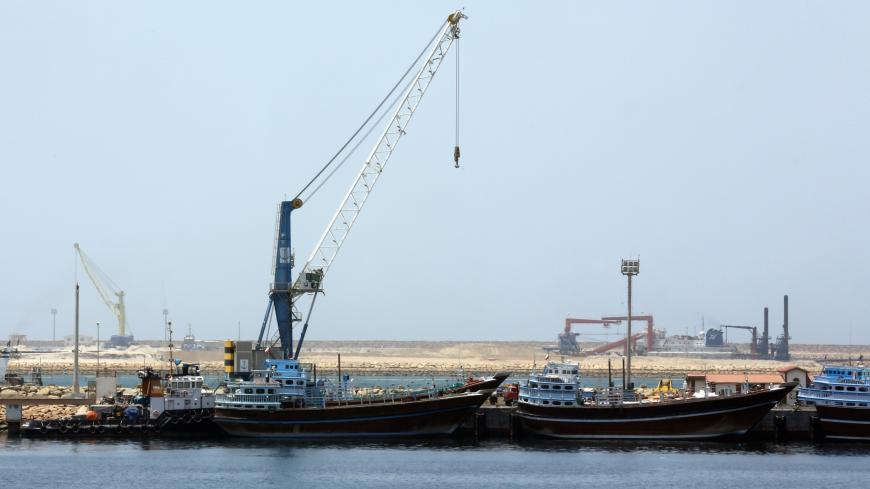 A partial view of the Kalantari port in city of Chabahar, May 12, 2015. Chabahar, located on the coast of Sistan-Baluchistan is open to the Oman Sea and the Indian Ocean. It is Iran's gateway to Pakistan and Afghanistan in the east, the Central Asian countries to the north, and Turkey and the Gulf countries in the west. - GETTY/Atta Kenare

The Middle East is a place of zero-sum games in which Iran is a player. Beyond the region, however, in Eurasia, Tehran is attempting to take part in a win-win game.

By increasingly operationalizing its section of the International North-South Transport Corridor (INSTC), Iran is trying to step up its presence in the geo-economy of Eurasia with the strategic goal of reviving its historic role as the link connecting north and south Eurasia. Indeed, during the past few years, participation in the corridor —  which connects the Indian Ocean and the Persian Gulf to the Caspian Sea via Iran and then Northern Europe via the Caucasus and Russia — has become the focal point of Tehran’s economic diplomacy.

The tripartite agreement between Iran, Russia and India to develop the INSTC was signed in 2000, with additional countries joining subsequently. The participating states, however, have only recently tried to make the agreement operational, through new investments and diplomatic visits between involved countries: Russia, within the framework of Eurasian Economic Union; Azerbaijan with the aim of expanding its infrastructure connections with its neighbors; India, with the aim of rivaling China’s One Belt, One Road project and expanding its economy; and, Iran, with the hope of escaping economic and transit isolation and reducing the effects of sanctions on its economy. All the states now see it in their national interest to make the INSTC work.

The INSTC is aimed at making it easier for India and Southeast Asia to access Russia and Central Asia (and vice versa). While it is not meant to rival the Suez Canal, as the latter is a global trade artery, it does compete with China's One Belt, One Road at some nodal points.

If the INSTC becomes fully operable and utilized, it could increase India’s trade with countries along the route from $28 billion to $170 billion, according to some estimates. Indeed, the INSTC is 40% shorter in distance and 30% cheaper in shipping costs than India’s current trade routes with Russia and northern Europe via the Suez Canal. In addition, if the India-Myanmar-Thailand corridor also becomes operational, Southeast Asia will have cheaper and faster access to Central Asia and northern Europe. Moreover, the corridor provides Russia, Central Asia and the Caucasus with new connections to South and Southeast Asia.

The endeavor also has geopolitical importance for the emerging powers of Russia and India and will increase their international freedom of action, i.e., allowing them more freedom to choose between respective infrastructure initiatives. Meanwhile, it is clear that operationalizing the corridor will enhance Iran’s geo-economic and geopolitical position.

With the INSTC, Iran would connect the north and south of Eurasia via railway from terminals at the southern ports of Bandar Abbas and Chabahar that connect with three train links: Sarakhs-Tajan, Incheh Borun-Turkmenistan-Kazakhstan and Astara(Iran)-Astara (Azerbaijan). The first two of the latter three railways are already operational, with the third likely to be finished in the next four years.

Iran could potentially earn $1 billion-2 billion a year from the transit of goods via the INSTC. Some officials in the Iranian railroad industry claim that each ton of goods could generate some $50 in transit revenue for the country.

In practice, however, Iran faces serious challenges in its quest to achieve the strategic aim of becoming a transit hub of the INSTC. The Qazvin-Rasht-Astara railway — characterized by President Hassan Rouhani's administration as the most important part of the corridor inside Iran — has a long way to go before becoming operational. The railway between Qazvin and Rasht has been under construction since 2000. After some 22 trillion rials ($459.8 million) in investment, it will likely become operational in the coming months.

Meanwhile, the Rasht-Astara railway requires another $1 billion in investment before it can begin operating. Of this figure, $500 million will be provided by the Republic of Azerbaijan, with this section of the railway probably usable in 2022. In addition, the 1,019-mile railway connecting the southeastern port of Chabahar to Sarakhs, one of the major parts of the INSTC, needs an investment of $2.5 billion. Over the past 17 years, only 15% of the required work has been completed.

Going forward, the scarcity of financial resources, coupled with forthcoming US economic sanctions, will create a major obstacle in the way of completing the remaining parts of INSTC inside Iran. In addition, considering that road and railway projects in Iran have always depended on government investment — and thus involve a plethora of rent-seeking activities as well as local bureaucratic rivalry — it will take a long time before these projects are completed.

The other challenge is that Iran has failed to pay sufficient attention to the requisite administrative infrastructure for international trade and transit, such as consideration of the business environment and bringing its trade rules in line with international regulations. In this regard, Iran is the only major economy in the world that has yet to become a member of the World Trade Organization.

Other obstacles include ongoing protectionist policies, which are still an important part of Iran’s economic policy. Iran's connection to the international financial system also remains a big question mark due to sanctions, and it has not signed any major agreements related to trade facilitation with its neighbors. In 2016, the World Bank ranked Iran 96 out of 160 countries in the area of trade logistics. Indeed, Iran’s low ranking in this area in both soft and hard infrastructure is a clear sign of its shortcomings.

Therefore, although it has been 20 years since the Bandar Abbas-Sarakhs-Tajan line, one of the INSTC routes, became operational, Iran’s share of transit on the corridor was only 360,000 tons in the Iranian year ending March 20, 2017, generating a negligible $18 million. Abbas Akhoundi, the minister of roads and urban development, has cited Iran’s weakness in the logistical chain as the main reason behind the negligible transit revenues.

Even with the above issues, the increasing fragility of the Joint Comprehensive Plan of Action (JCPOA) and the re-imposition of US sanctions in the coming months represent the greatest challenge for Iran. Its success in completing parts of the INSTC was largely due to the nuclear deal. The potential collapse of the JCPOA will result in a scarcity of financing, including the possibility of putting into question Indian and Azerbaijani investment in the INSTC. It will also make financial interactions with Iran and transit via its territory risky business, which counties will want to avoid.

All of these issues make it much more difficult for the Rouhani administration to complete the missing parts of the INSTC. Mindful of that, even if the required infrastructure is completed, Iran’s dream of becoming the transit hub of Eurasia will not easily come true.