The International Monetary Fund is keen to reduce Egypt's investments in the country in favor of private investment, but the new government has decided to increase the amount it will spend. 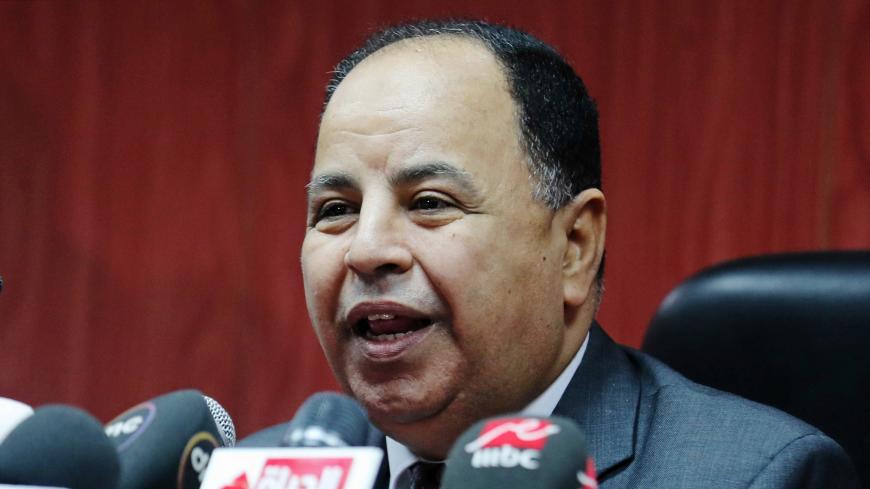 This program, however, stirred wide controversy as Finance Minister Mohammed Moaet announced July 5 that the government will increase its investments to 100 billion Egyptian pounds ($5.6 billion) from 70 billion pounds ($3.9 billion) in the 2017-18 fiscal program.

The increase directly contradicts International Monetary Fund (IMF) recommendations for Egypt's economic reform program, which say the government should reduce its investment role and expand the private sector's contribution. The IMF approved a $12 billion loan to the Egyptian government in November 2016 to finance the economic reform plan.

"The government wouldn't be able to [accommodate] the need for employment at a time when Egypt is required to provide 700,000 job opportunities per year to be able to cope with the huge population growth," he said.

Egypt's public sector stopped hiring people in 2015, as it is overstaffed, employing roughly 7 million civil servants to serve a population of 85 million. In comparison, the United States employees about 2 million in the public sector to serve more than 300 million people. Even when accounting for government contractors and grantees, the United States only employees roughly the same number of people for over three times the population.

"Many developing countries have learned from past experience in economic reform that the state's excessive interference in the economy deprives the private sector of opportunities that can otherwise enable it to achieve economic growth and create jobs in many fields away from any competition with the state and all its resources. In other words, it would be better for the state to either promote public-private partnerships [PPPs] or encourage the private sector to expand," Lall added.

A source from the Egyptian Ministry of Finance told Al-Monitor on condition of anonymity that $5.6 billion in government investments isn't a huge figure and wouldn't impede the private sector or prevent it from expanding. Egypt receives about $9 billion in foreign investments per year, excluding Egyptian private investments.

The source pointed out that many of the government investments under the new program will be earmarked for developing existing projects. This, he explained, doesn't count as governmental expansion at the expense of the private sector, as most of these projects are PPPs.

The source said most of these investments will focus on oil and gas exploration, power plants and electricity distribution networks, mining projects, infrastructure and development in slum areas.

He also stressed that all the projects include private sector companies as key partners. Chief among these are British Petroleum (BP) and Italy's Eni SpA in the fields of gas and oil; Germany's Siemens AG in power plants; and Orascom Construction Ltd. and Arab Contractors (Osman Ahmed Osman & Co.), both of Cairo, in infrastructure and development in slums.

That information was confirmed by Mohammed Maher, CEO and vice chairman of investment bank Prime Holding for Financial Investments SAE. Prime Holding conducts periodic studies on the impact of government projects and private sector expansion on the stock market. "We are aware of the government's investment plan until 2022, and most of these investments are indeed PPPs," he said.

Maher explained that the government investment plan, in partnership with the private sector, earmarks $24.4 billion to develop gas and oil fields until 2022. During the same period, $8.2 billion will go to oil refining projects and $12.6 billion to build natural gas and oil transmission lines from Egypt to several countries. This would turn Egypt into a regional gas export hub because by 2022 these transmission lines will extend more than about 650 kilometers (404 miles). Also, he added, $4.2 billion will be dedicated to produce petrochemicals, and $2.8 billion to expand mining projects, namely gold mining.

"These projects include coal power plants with investments worth $6 billion and pumped-storage hydroelectricity plants in the Safaga region of the Red Sea at a cost of $2.7 billion," he added.

Mohammed Fouad, a management professor at Modern Science and Arts University in Cairo, told Al-Monitor that PPPs rescued Egypt's oil sector after the government partnered with Eni, BP and Russia's Rosneft, and in the electricity sector with Siemens. Meanwhile, for infrastructure projects, slum projects and the new administrative capital project, the government partnered with major construction companies.

Fouad pointed out several problems that would prevent the government from providing the necessary liquidity to establish major investments unless it partners with the private sector. Chief among these is the huge budget deficit and accrued interest the state is required to pay annually, especially in light of the huge loans that it has taken out, including the IMF loan in November 2016. Egypt, he said, is required to accelerate the pace of investments in general to provide thousands of job opportunities.

Ahmed Sabri al-Hakim, a traffic engineering and transport planning professor at Al-Azhar University, told Al-Monitor that expanding government investments in transportation would be beneficial if carried out as PPPs.

He added that Egypt had a strong transportation system in the 1990s and early 2000s because it had private sector partnerships with Abu Rajaileh Transport Co. for public transport organization and Heliopolis Co. to manage Heliopolis Metro.

Hakim believes all these services have deteriorated as the private sector role subsided. He said that the only solution to developing transportation and other projects is to turn them into PPPs managed by the private sector.