Turkey's most popular opposition candidate, Muharrem Ince, owes a good part of his success so far to his mysterious social media team, which granted Al-Monitor an interview. 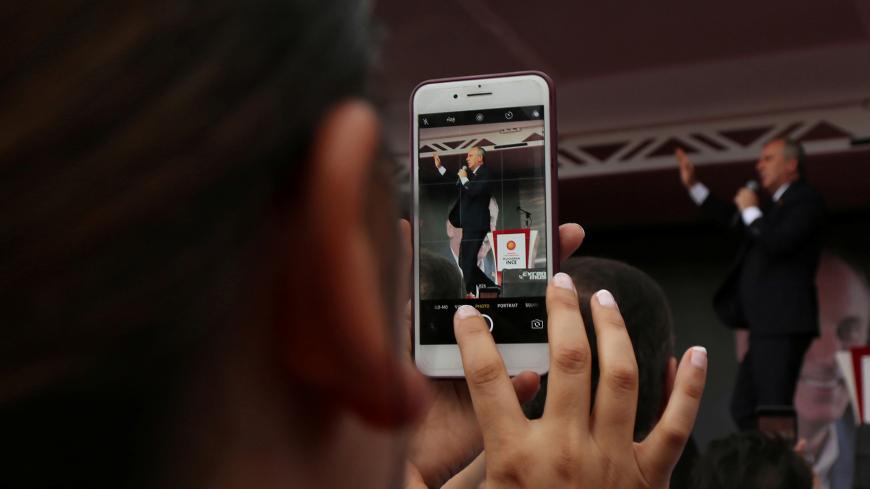 A woman takes a picture of Muharrem Ince, the presidential candidate of the main opposition Republican People's Party, with her mobile phone during an election rally, Diyarbakir, Turkey, June 11, 2018. - REUTERS/Sertac Kayar

After months of denying the possibility of snap elections vehemently, the Turkish government called for early elections 16 months sooner than planned. One of the likely reasons for this decision was to curtail the time available for the opposition to prepare an effective campaign. The main opposition Republican People's Party (CHP) did not announce its candidate until May 4, leaving it merely 50 days on the campaign trail.

In the beginning of the election campaign, not many were hopeful of the new opposition candidate Muharrem Ince, but he and his team have been able to run a calm, positive and witty campaign that makes good use of technology and embraces a diverse public.

In Turkey, where most of the mainstream media is controlled by the government, the appeal of social media is becoming stronger with each election cycle. Ince spoke about his social media team on live TV on a pro-government channel June 9. Ince described the team as “12 well educated and smart young men and women” and said they call themselves the “10th Floor.” Curiosity about them grew.

Al-Monitor communicated with the social media team via email and WhatsApp between June 15-18. The 10th Floor team members, who asked not to be named individually, wrote their answers together. In Turkey, expressing political views — particularly if one does not belong to the political party in control of the government — could cost one dearly.

That said, the achievements of this group are real and visible, attracting more than 150,000 comments or messages on social media. According to the Media Monitoring Center, Ince’s social media posts are the most popular among the candidates.

The members of the team come from diverse backgrounds. Some are graduate students and some normally work full time in the private sector. All have dedicated themselves to the campaign 24/7. The 10th Floor team matches Ince’s energy, meaning the group never sleeps. Its members analyze comments that pour in from all around the world on Twitter, Instagram, YouTube, Facebook and other platforms and share insightful and intriguing ones.

In only 10 weeks, these young people have left a mark on Turkish politics and proved to the  "AK Troll" army that backs Erdogan's Justice and Development Party (AKP) that they can win the attention and appreciation of the Turkish public without resorting to negative messaging. The chat with the team is shared below:

Al-Monitor:  Where does the name “10th Floor” originate? Who are you guys?

10th Floor:  We formed the 10th Floor team right after Ince announced his candidacy. We are in charge of social media. We are a team of 12 volunteers from different corners of Turkey. We named it that because we run our campaign from the 10th floor of a building in Istanbul.

We are all from middle-class families, children of working families. We belong to Generation X and Y. We have deep roots in our nation’s culture and we are able to enrich our roots with universal values. We are also a transitional generation. We were born into [a world of] more traditional means of communication, but we grew up with new media tools and gadgets. We watch technical and technological developments and their impact upon economy and politics closely. We also observe how that progress affects our country and our cities up close.

We majored in diverse fields — communications, archaeology, engineering, public administration, just to name a few. Individually we have a variety of interests, community engagement projects. For example, politics, philosophy, digital activism, music (most of us play a musical instrument — this may be our most common interest), bicycling, e-sports, rugby and of course gastronomy. :)

Al-Monitor:  As the social media team, within five to six weeks, you guys transformed the Turkish political spectrum. In such an oppressive environment, you were able to produce pleasant, positive images that put a smile on people’s faces. Can you give us some examples of your most successful work? Why do you think you were able to have such a strong impact?

10th Floor:  What changed the course of events in Turkish politics is Ince’s style, courage and his love for Turkey and belief in the youth. We have just been instrumental in his visibility during this process. As his social media team we utilized positive language with humor. In addition, we appealed to the motions of the people.

What Turkey misses are mornings with hope and without bickering. People yearn for a world removed from quarreling, that makes you smile while providing criticism and [hard] truth, one that leaves room for dreaming. This election process provided an opportunity for our country and the undercurrent [of hope and change] was unleashed.

Al-Monitor:  What is your goal? I mean, of course it is for Ince’s victory, but beyond that what is the team’s raison d’etre?

10th Floor:  Our country is on the threshold of an important decision. We want to live in a land that is peaceful, happy, in sync with the times and has a productive economy. We know that Ince understands this goal and has the courage to accomplish it. He values human life and humanity. That is why we each work tirelessly on his campaign 19 to 20 hours per day.

We want to share this message with everyone through our social media campaign: Ethical communications. Both traditional and social media need to operate with values of transparency and ethics, as it should be. We think media should be built upon values to cherish sparring views respectfully and public space should allow for the culture of democracy to flourish. We do not want media to be built upon manipulation, perception management and baseless propaganda.

Al-Monitor:  Social media has been under pressure from the "AK Trolls" of the government. How do you deal with negative campaigning?

10th Floor:  There are manipulative efforts in all aspects of social media, not only in Turkey but on a global scale. The best way to deal with this is to establish a platform where an accurate information flow is sustained and never to give up on ethical communications. Access to information is a basic human right. In world history, communication revolutions always scared those in power. Governments always try to control methods of all communication. Yet we learn from history that they fail to control those who seek out accurate information. This applies today.

Al-Monitor:  How do you evaluate your campaign overall?

10th Floor:  With each interaction and feedback, we are able to produce new commentary. So the campaign evolves into a collective product of the masses. We follow all feedback carefully and take it all into consideration. This is our nation’s campaign, Turkey’s campaign. We all produce together and stand in solidarity.