The repeated attacks against the country’s main oil lifeline will always be a looming threat as long as no central government is in place with full power over the entire territory of Libya. 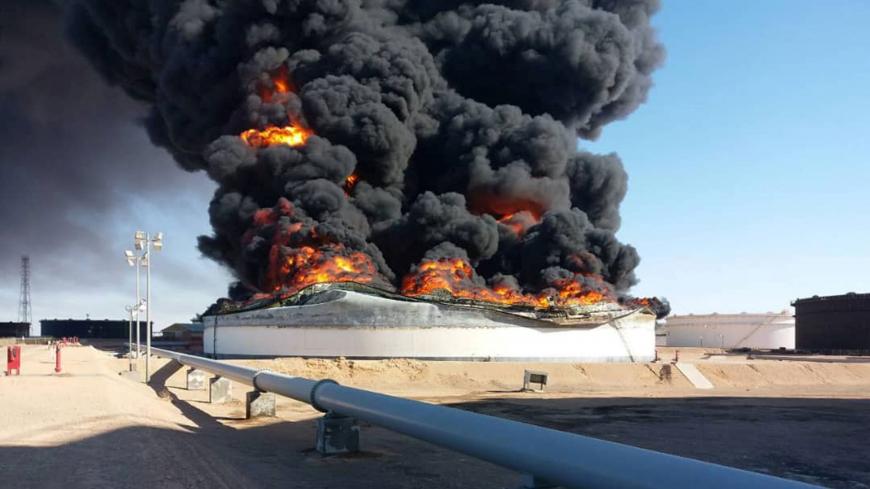 Smoke and flames rise from an oil storage tank that was set on fire amid fighting between rival factions at Ras Lanuf terminal, Libya, June 18, 2018. - The National Oil Corporation/ Handout via Reuters

On the morning of June 14, with just a couple hundred armed men driving a dozen pickup trucks, Ibrahim Jadran, the commander of the so-called Petroleum Facilities Guard, took over two of Libya’s main oil exporting terminals used by the Libyan National Oil Company (NOC) — Es-Sidra and Ras Lanuf. The terminals are located in eastern Libya near Jadran’s hometown, Ajdabiya, where his tribesmen of al-Magharba tribe are concentrated and seem to have helped him.

The NOC was forced to declare a state of force majeure, suspending oil exports and evacuating its employees from both terminals and surrounding areas.

In a statement sent to Al-Monitor, the NOC estimated losses at “tens of billions of dollars” before adding that the burning of at least two oil depots at the terminals will take “years and even more costs to repair and return production to normal sustainable levels.” The statement also warned of “catastrophic environmental” consequences on the region due to leaking and burning oil.

NOC Chairman Mustafa Sanalla condemned the attack in a recorded video message broadcast on NOC's website June 14, calling Jadran an “outlaw who cost Libya in 2013 more than $100 billion.” Back then, Jadran and his men had taken over the terminals, suspending oil exports from 2013 to 2016, before he was forced to flee after the self-styled Libyan National Army (LNA), commanded by Khalifa Hifter, took control of the oil ports.

Sanalla pointed out that Libya “will lose daily production of about 400,000 barrels per day as lost exports, and if the status quo continues, the estimated cost will be about $880 million a month.”

He concluded by saying, “This is a national catastrophe and the outlaw [Jadran] should be forced to leave the terminals.” Indeed, the loss is huge and very detrimental to any economic progress or stability since oil is the main source of revenue for the militia-dominated country.

Jadran said in a recorded video June 14 that the bulk of his force is made up of former Petroleum Facilities Guard members and other groups, including the notorious Benghazi Defense Brigades, which is a loose coalition of Islamist groups formed to counter Hifter’s LNA in Benghazi before he chased them out in July 2017 by taking over the entire city in eastern Libya.

Jadran also claimed that some of Libya’s Tebu men, a minority of nomads roaming southern Libya with a concentration in Sebha, are among his fighters. Nevertheless, Tebu’s social leader Ahmed the First denied this while threatening Jadran with “legal action for abusing our tribe’s reputation.”

The attack apparently surprised Hifter, whose forces were busy clearing Derna from al-Qaeda and Islamic State fighters since the LNA launched its offensive to retake the coastal town in northeastern Benghazi on May 8.

Continuing the fight in Derna is likely to deplete and weaken any capabilities the LNA managed to amount to counter Jadran let alone force him out of the terminals. And leaving Derna after it is almost fully conquered could mean Islamist remnant forces inside the city might gain the military momentum again and launch their counter attack, which is likely to be very costly for the LNA, in both men and equipment.

In the wider political scene in Libya, the attack is likely to have serious negative repercussions after an atmosphere of hope prevailed in anticipation of the Dec. 10 elections set by UN envoy Ghassan Salame and agreed on in the latest inter-Libya talks hosted and supported by France in Paris on May 29.

In the military sense, Jadran cannot launch such daring operations alone and he likely has some support from inside and outside Libya. Technically speaking, his group consists of a gang with little military capacity and know-how fighting in a desert, which is difficult even for professional armies, let alone for groups of this size and capability.

Militarily, Jadran is likely to face challenging problems to maintain his grip on the oil crescent, particularly the two terminals. His supply lines are going to be a major headache. If he depends on any supply lines extending from the south of Libya from where he launched his attack, then such lines are easily disrupted and cut since they run through a harsh open desert with little natural cover and zero military air cover. If he depends on supplies from within the region, particularly from his tribesmen in nearby villages and towns, such supplies are hard to sustain and people involved in such work are likely to be subjected to harsh revenge once LNA soldiers get to their areas.

Besides, the terminals area is hard to defend for many reasons. Its proximity to the seashore makes it open to sea attacks, as Jadran lacks any sea-mounted military equipment. The nature of its installation — which is highly flammable — makes it a hazardous place to use military force where any tank could be hit at any time. It is difficult to control such a place, especially after most of the NOC’s professional firefighters have already left.

LNA spokesman Ahmed Mesmari announced on June 17 that LNA’s air force has gone into action in the areas around the terminals all the way to Sirte, some 200 kilometers (124 miles) to the west, warning civilians to be careful.

It is a matter of time before Jadran and his forces are ejected from the areas. But the repeated phenomena of gang attacks against the country’s main lifeline will always be a looming threat as long as no central government is in place with full power over the entire territory of Libya. The Government of National Accord in Tripoli can hardly do more than issue statements of condemnation, which it did, but that will not help retake the oil terminals or enable NOC to resume oil exports.