Iraqi Popular Mobilization Units fighting in Syria were targeted recently by some country's aircraft, but no one's fessing up. 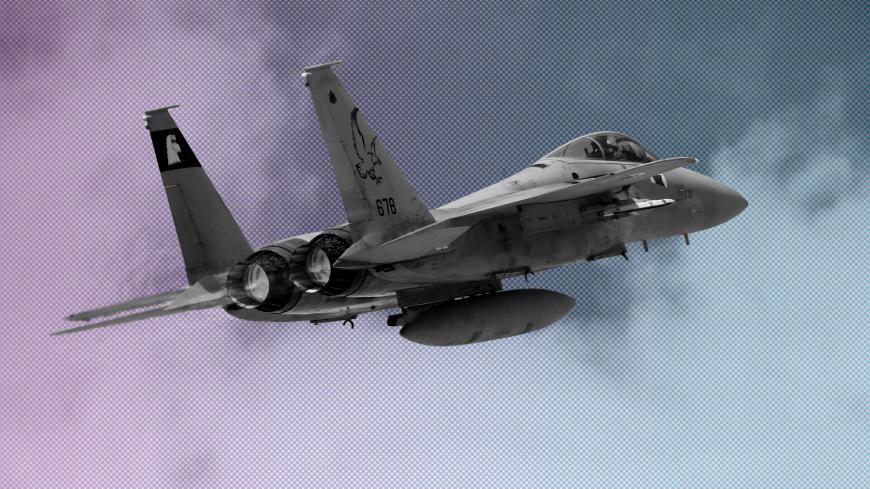 An airstrike on pro-Damascus forces — including Iraqi fighters — in eastern Syria has spurred conflicting accusations about who was responsible for the attack.

The Syrian government and Iraqi militias blamed the US-led anti-Islamic State (IS) coalition for the June 17 strike on the town of al-Heri, a claim the Pentagon denied. An undisclosed US official speaking to CNN blamed Israel, while Israel still remains mum.

Syria's state news agency SANA did not give casualty figures, only reporting that "a number of martyrs" were killed. Meanwhile, Iraq's Popular Mobilization Units (PMU) issued a statement June 18 that said, "US planes fired two guided missiles at a fixed [PMU] position on the border with Syria, killing 22 fighters and wounding 12."

US Army Col. Sean Ryan, the spokesman for the Combined Joint Task Force fighting IS, denied June 18 that the United States was behind the strikes on PMU sites or on al-Heri, a strategic town on the Syrian border with Iraq. He warned against "misinformation.”

Then whose aircraft delivered the strikes?

Hisham al-Hashimi, a security analyst at Al-Nahrain Center for Strategic Studies in Iraq, told Al-Monitor, “The joint Iraqi leadership isn't overly preoccupied with who launched the airstrikes on al-Heri village, but evidence indicates Israel is most likely the culprit.”

Israeli Prime Minister Benjamin Netanyahu had said in a June 17 meeting with Russian President Vladimir Putin and US Secretary of State Mike Pompeo, “We will act and we are already acting against Iran and its allies’ attempts to position themselves near the Israeli borders and within Syria.”

Hashimi believes Israel carried out the air raid “to target supply lines to Iraqi and Iranian armed militias" that still control the road between western Anbar in Iraq and Al-Bukamal in eastern Syria.

The strike also "aimed at undermining the wings of non-Syrian factions that espouse Iran’s ideology, to drain the infrastructure of [their] intelligence centers, the staff and the centers of command and control," he said. “The map of air raids confirms that Israel is taking its steps — with the knowledge of Russia and the US — to cut the Tehran-Beirut [connection] by isolating Baghdad and Damascus by land.”

Iran wants to build a corridor through Iraq and Syria and on to Beirut on Lebanon's coast.

“A guided aircraft carried out the strike using advanced weapons of smart missiles in the framework of the dispute between Israel and Iran over areas of influence in Syria," he told Al-Monitor. "The forces that were targeted were 700 meters [765 yards] inside the Syrian territories, and they were in charge of securing the Iraqi borders and preventing Islamic State infiltration to Wadi Hauran [Hauran Valley]."

A US government official who spoke on condition of anonymity on June 19 told Al-Hurra channel, which is funded by the US government, "The Israeli air force launched the raid to block the road that Iranians want to open between Tehran and Beirut. This task proved difficult and logistically complicated, as the Israeli jet fighters had to fly a distance of 348 miles to carry out the strikes near Al-Bukamal.”

Al-Monitor contacted the US Embassy in Baghdad for comment, but it refused to give any statements, possibly to avoid clashing with the Iraqi government, whose Ministry of Foreign Affairs condemned the incident.

Qais al-Khazali, the leader of Asaib Ahl al-Haq, an Iraqi paramilitary unit that is part of the PMU, condemned the incident. His group asserted that both the United States and Israel were behind it. He threatened to take deterrent measures, but PMU leader Karim al-Nouri told Al-Monitor, “The PMU is part of the [Iraqi] armed forces and will not respond unless the armed forces’ chief of staff, who is also the prime minister, gives such orders.”

Iskandar Watwat, a member of the Iraqi parliament's Security Committee, told Al-Monitor the “identity of the party that launched the raid has not officially and conclusively been determined.” He added, “The Iraqi government is investigating the incident at the highest levels. The Security Committee is working on an official complaint from Iraq to the UN Security Council because the forces that were shelled are part of the Iraqi armed forces and their security institutions.”

Iraqi Joint Operations Command spokesman Yehya Rasoul told Al-Monitor, “The command regrets this raid, which only serves terrorist groups." He said a statement released June 18 shows that the command denies any relations with Iraqi forces in Syria. It read: “Our security forces with all their formations, whether army, police or PMU, have not faced airstrikes or other raids. We are not in contact with the forces that were shelled at a distance of 1.5 kilometers from the Iraqi border in Syria. We have no coordination with them.”

Hashimi said, “The policy of the general command of the Iraqi armed forces supports the international [goal] of isolating Baghdad [from] Damascus by land. The statement of the Iraqi command refused attributing the Iraqi forces to the Joint Iraqi Forces. It said Iraq has no knowledge of the duties of the targeted forces that are Iraqi. This statement sets the future horizons and the way Iraqi leaders are headed with their support for the international coalition and its allies in blocking the road between Tehran and Beirut.”

Al-Monitor contacted Ofir Gendelman, the Arab-media spokesperson for Netanyahu, but he refused to give any statement about the incident. Israeli researcher on Iraqi affairs Ronen Zeidel told Al-Monitor, "The attack targeted Iranian balance-breaking weapons transferred into Syrian territories to hurt Israel.”

If Israel is responsible for the strikes, such operations are likely to recur, as long as Iraqi factions are still fighting in Syria. Israel considers these factions to be affiliated with Iran and feels threatened. Therefore, it might again strike the Anbar-Al-Bukamal road, to close the key crossings and supply lines from Iran to Syria through Iraq.