The Donald Trump administration and US lawmakers celebrated the grand opening of the new US Embassy today as Israeli soldiers killed dozens of protesting Palestinians. 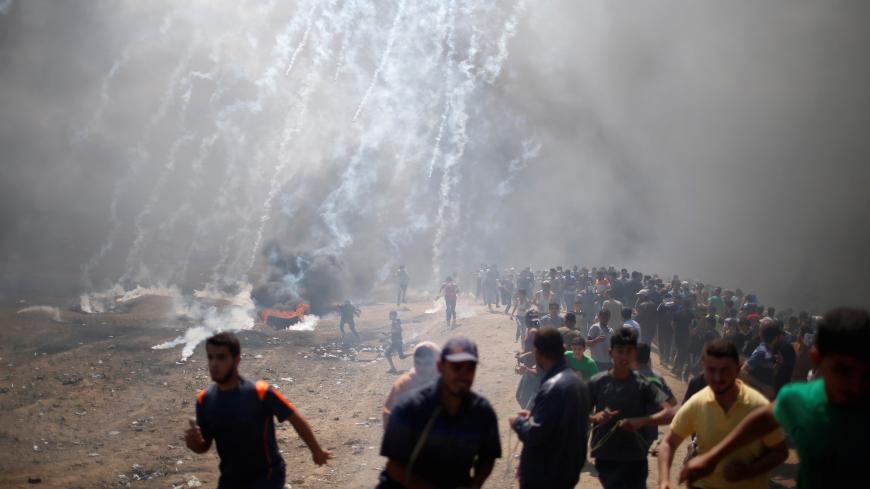 Palestinian demonstrators run from tear gas fired by Israeli troops during a protest against the US Embassy move to Jerusalem and ahead of the 70th anniversary of the Nakba, at the Israel-Gaza border east of Gaza City, May 14, 2018. - REUTERS/Mohammed Salem

The grand opening of the new US Embassy in Jerusalem today was marred by the shooting deaths of dozens of protesters in the Gaza Strip.

Despite the violence, Washington’s attention remained firmly fixated on the pomp and pageantry of the opening ceremony as the Donald Trump administration and US lawmakers who have long supported the controversial move refused to let Palestinian bloodshed mar the historic occasion.

“Big day for Israel. Congratulations!” Trump tweeted this morning after urging Americans to tune into Fox News coverage of the embassy’s inauguration.

While the Trump administration picked the timing to commemorate the 70th anniversary of the founding of Israel, the date runs up against the anniversary of the mass Palestinian displacement that followed. Thousands of Palestinians in the Gaza Strip have held weekly protests at the Gaza border fence since March 30. The demonstrations, backed by Hamas and dubbed “The Great Return March,” culminated this week with a rally by some 10,000 protesters.

Israeli snipers at the border reportedly today killed at least 52 Palestinian protesters and wounded dozens of others, according to the Gaza Health Ministry. The death toll from today alone surpasses that of the previous six weeks in which 47 people were killed and thousands wounded, including children and journalists. No Israelis have been wounded since the protests started.

Amid glowing praise for Trump’s embassy relocation and assertions that it somehow helps the cause of peace, virtually no administration official or lawmaker from either major party acknowledged the protests and casualties.

“We remain committed to advancing a lasting and comprehensive peace between Israel and the Palestinians,” Secretary of State Mike Pompeo said in a statement. “I look forward to returning soon to visit our new U.S. embassy and Ambassador Friedman in Jerusalem.”

While Pompeo is not attending the opening ceremony, Trump’s daughter and son-in-law, Ivanka Trump and Jared Kushner, special envoy for the Israeli-Palestinian peace process Jason Greenblatt, US Ambassador to Israel David Friedman and Treasury Secretary Steven Mnuchin are all part of the US delegation. Kushner, Greenblatt and Friedman all have ties to West Bank settler groups.

House Foreign Affairs Committee Chairman Ed Royce, R-Calif., noted that a “bipartisan majority in Congress has been calling for this important action since the 1990s.”

“Every nation should have the right to choose its capital,” Schumer said in a statement. “I sponsored legislation to do this two decades ago.”

Rep. Eliot Engel, D-N.Y., the top Democrat on the House Foreign Affairs Committee, said, “I will do everything in my power to support” the construction of a permanent embassy. He added that he looked “forward to hearing what the administration’s plan is to bring the parties together to work toward two states for two peoples.”

While Democrats have a long history of voting for legislation and nonbinding resolutions to move the embassy, many nonetheless condemned Trump’s decision as detrimental to the peace process when he announced it in December. Democrats were conspicuously absent from a congressional delegation at the opening ceremony, which was led by Sen. Lindsey Graham, R-S.C., and includes Sens. Ted Cruz, R-Texas, Mike Lee, R-Utah, and Dean Heller, R-Nev.

“I am disappointed that not one Democrat came,” Graham told reporters. “What does that say? It’s not for me to tell you what that says. It hurts me. Because I work across the aisle on a regular basis.”

While most Democrats — including those who objected to Trump’s embassy move — remained silent on the mounting death toll amid the Gaza protests today, a handful of Democratic lawmakers highlighted the chaos and criticized the Israeli response.

Sen. Dianne Feinstein, D-Calif., called the casualties “heartbreaking” and noted that “the humanitarian situation in Gaza is desperate,” calling on Trump to restore funding to the UN agency for Palestinian refugees, UNRWA.

“The location of the embassy is a final-status issue that should have been resolved as part of peace negotiations where both sides benefit, not just one side,” said Feinstein. “Israel will only know true security when it is at peace with its neighbors.”

“There are better ways to deal with the tensions in #Gaza than bullets,” Rep. Marc Pocan, D-Wis., tweeted. “Restraint is necessary for peace to ever occur.”

“The U.S. should be laying the groundwork for peace,” she tweeted, “not fueling conflict in the region with an unnecessary & counterproductive embassy move.”