Will Israel, Hamas miss out on chance for deal?

Israel and Hamas are about to miss an opportunity to halt the cycle of violence and make a deal for lifting the siege and demilitarizing the Gaza Strip. 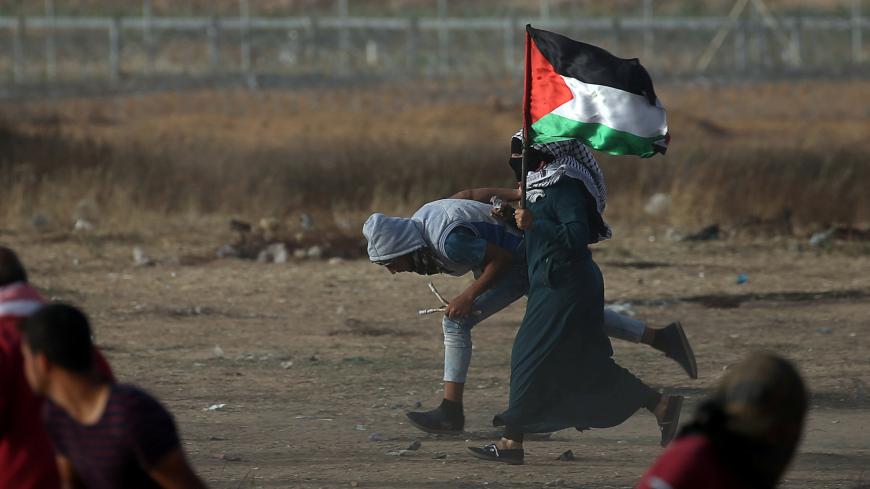 A female demonstrator runs for cover during a protest where Palestinians demand the right to return to their homeland, at the Israel-Gaza border in the southern Gaza Strip, May 25, 2018. - REUTERS/Ibraheem Abu Mustafa

There is much despair and suffering in the Gaza Strip. UN envoy for the Middle East Nickolay Mladenov warned May 23 that Gaza “is on the verge of collapse.” Gaza’s almost hermetic closure by Israel, the rift between Hamas and Fatah, and the continuous investment by Hamas in arms and tunnels instead of investing in the economy have led to a catastrophic humanitarian disaster. Hamas cannot resolve it on its own, even now that Egypt has agreed to open the Rafah crossing during the month of Ramadan. Within the Hamas political and terrorist leadership in Gaza are different opinions as to how to deal with the crisis, ranging from a political solution to another war with Israel.

A senior PLO official with close ties to the Hamas leadership in the Gaza Strip told Al-Monitor that Ramallah is satisfied over Hamas’ failure to ignite violence against Israel from the West Bank. In fact, while President Mahmoud Abbas condemns the Israeli killing of Gazans and has called for three days of official mourning, he believes that Hamas has failed in its latest effort to ignite violence for political and public relations purposes. And so, despite Arab, Muslim and international outpouring of sympathy with the victims of the confrontation, Hamas itself is as isolated as before in handling the Gazan humanitarian crisis.

In his view, there is currently an opportunity for Israel to negotiate, via Cairo and Ramallah, a deal with Hamas that would stabilize the situation. More so, such an initiative had already been discussed by Ramallah leadership and Egypt, as well as the European Union.

According to the PLO senior official, an essential condition for such a deal would be the implementation of the reconciliation deal between Fatah and Hamas in a way that would allow the Palestinian Authority (PA) to take civilian and some security control of Gaza, especially on the crossing points. Also, Hamas would demilitarize most of the Gaza Strip, except for a force overseeing public order, with a civilian security contingency similar to that of Fatah in the West Bank. Israel would then be required to lift the sea closure of the Gaza Strip, keeping its navy 6 miles away from Gaza, allowing for the establishment of a Gaza harbor.

For Israel to agree to such a deal, other elements would be included in it, such as Israeli control over the passage of goods imported from Israel and control of the aid from donor countries transferred through the ports of Haifa and Ashdod, and through the various crossing points.

The PLO official added that the EU would expedite economic and security experts to Gaza to monitor that aid funds are indeed channeled to economic projects and humanitarian relief. This would be carried out in coordination with the US administration. Egypt would open the Rafah crossing for the passage of goods and people, provided Hamas stops the use of violence and allows greater PA control of the Gaza Strip.

According to the PLO official, the more pragmatic elements in the Hamas leadership agree now in principle to explore such a deal. He estimated that such negotiations could bear fruits only if championed by the Egyptian intelligence and would obviously require Israeli consent.

A senior Israeli Ministry of Foreign Affairs official with access to Prime Minister Benjamin Netanyahu told Al-Monitor that Israel would be open to a deal, provided that it would entail the full demilitarization of the Gaza Strip by Hamas. In this case, and according to security conditions, Israel would agree to a partial lifting of the closure. It would also agree to exploring the possibility of a Gaza port with international security inspection monitored by Israel.

In his view, Hamas would reject such a comprehensive deal, as it has already done in the past. He also believes that Israel would agree to greater humanitarian assistance to Gaza by the international community through Israeli and Egyptian crossing points.

The Israeli official might be right about Hamas. Yet exploring, together with the United States, a comprehensive Gaza agreement has become urgent. In view of the escalating violence and increasing humanitarian crisis, all sides now need a deal: Hamas demilitarization in exchange for lifting the closure, with an enhanced role for the PA in the Gaza Strip as a necessary building bloc toward a two-state solution process.