Despite emphatic past denials, Erdogan calls for early elections

By moving presidential elections up by over a year, Turkish President Recep Tayyip Erdogan has everything to gain. 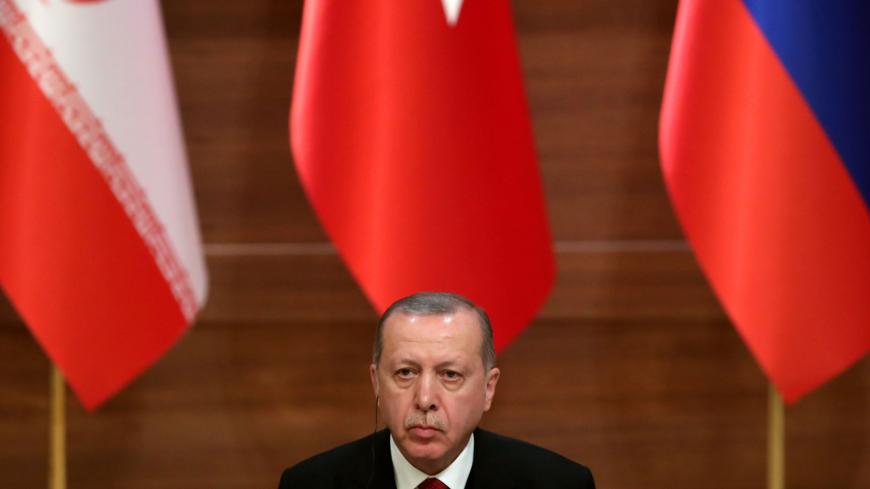 Turkey’s president announced today, April 18, that the country’s next presidential and parliamentary elections will be held in two months instead of in November 2019, a move expected to give him an enormous advantage, especially as the opposition currently has no candidate to challenge him.

With the election, now set for June 24, Turkey will convert to a presidential rather than parliamentary government. Under a referendum voters approved last year — barely — the next president’s power will increase significantly.

"Even though the president and government are working in unison, the diseases of the old system confront us at every step we take," President Recep Tayyip Erdogan said in announcing the early elections, according to state-owned media TRT World.

"Developments in Syria and elsewhere have made it urgent to switch to the new executive system in order to take steps for our country's future in a stronger way," Erdogan added.

Under normal circumstances, it would seem that an incumbent who holds the majority in parliament would be in no hurry to hold elections. And Erdogan had told reporters repeatedly, as recently as last month, that the election schedule wasn’t going to change.

“There will not be an early election,” he said then. “Municipal elections are scheduled for March 2019 and general elections for November [2019].”

Erdogan’s stern insistence that the election would be held as scheduled was repeated in the past month by Mahir Unal, the spokesman for the ruling Justice and Development Party (AKP), and presidential spokesman Ibrahim Kalin. Yet none of these statements were sufficient to curb public debate.

Ibrahim Uslu, the director of the Ankara Social Research Center, who is known for his close links to the AKP, had been predicting early elections for months.

Uslu and others argued that Erdogan’s firm denial of the possibility was a smart tactic allowing his supporters to finish their preparations quietly.

Erdogan’s official call to hold early elections means he is convinced that it’s in his best interest. Indeed, there are five crucial factors that support this decision. The first compelling reason is the dire situation of the economy. Although strict fiscal discipline is necessary to help control inflation, fast-growing foreign debt and the widening current account deficit, the government has to continue making extravagant promises to set the best mood until the election. Despite regular price hikes on basic commodities (such as electricity and gas), the AKP has diligently avoided new taxes and belt-tightening measures. For example, on April 3, Faith Erturk, a reporter from independent Halk TV, said the AKP had quietly pulled its own proposal for new value-added taxes that would have generated an estimated 1.6 billion liras (about $400 million) from midsize businesses.

As economics professor Yalcin Karatepe said, “The only positive economic [news] that the government can use [for the election campaign] is the growth rate.” Until the general election, Erdogan has to keep voters as content as possible, which means introducing more social benefits, extending credits and expanding consumer and public spending. Insiders saw that such lavish campaign spending couldn’t be sustained for another 18 months.

Erdogan’s reaction to the approaching economic crisis so far has been to criticize international credit agencies, and even AKP Cabinet members. On March 30, Erdogan targeted Deputy Prime Minister Mehmet Simsek without naming him. Simsek had told businesspeople not to take foreign currency loans. Erdogan scolded him for making negative comments on the economy. The need for funds is expected to grow exponentially in 2019.

The next reason to call for early elections is to take advantage of the rally-around-the-flag effect of Turkey’s military victory in Afrin, Syria — at least as it’s presented in the Turkish media. Metropoll Research has published a survey of potential and expected voter levels for the AKP, showing the influence of various factors over time. The Afrin offensive inspired poll participants and indicated a rise in the AKP’s expected vote share, and the July 2016 botched coup raised voter support to its peak.

High-tension, ultranationalistic outbursts traditionally have bolstered Erdogan’s image as a savior and father figure. Erdogan spends a lot of time in front of cameras in uniform posing with soldiers and children or other popular figures on the border. In other instances, news reports focus on the youth at Erdogan’s rallies chanting “Take us to Afrin, Chief.” The Afrin operation has been wrapped up in militant fever and presented as a victory to Turks, all while the country slips down in rankings of happiness and other basic freedoms and human rights. Could Erdogan have sustained his halo effect until November 2019?

The third reason early elections will benefit Erdogan is that he has finally muted almost all critical voices. The final blow came in two simultaneous acts. Turkey’s leading Dogan Media was sold to pro-government Demiroren Group, and the government implemented new regulations to further control domestic access to international publications and curb local independent broadcasters. The government can now control the distribution of a handful of independent newspapers and block all internet sites that don’t align with its views. This gives the AKP enormous power, not only for dominating the campaign but also for controlling the reporting of election results.

Fourth, Erdogan is all set with his election alliance, while the opposition still lacks a candidate. The more time Erdogan had to spend to keep this coalition intact, the more concessions he would have been compelled to give his allies. Parliament passed an election coalition bill after midnight March 12. The opposition protested the bill, which he deems the final step in ending parliament’s current role and a means to guarantee he gets the majority of votes. In the meantime, the opposition has not formed a coalition and presented candidates.

The last reason for AKP supporters to cheer early elections is their insistence that a prompt transition into the presidential system is essential. The bureaucracy is in limbo between the offices of the president and the prime minister. There are growing tensions between the AKP’s higher echelons about how to function in this hybrid system. That discontent could have a significant impact on elections. Currently, the AKP is in talks with the Nationalist Action Party to pass another bill this month referred to as “harmonization legislation,” through which the prime minister’s office would be eased out and all government branches would be restructured under the presidency. Although the proposal is not yet public, Ankara’s bureaucracy is anxiously awaiting a major restructuring starting in June. “The longer the transition takes, the more difficult it would become for the AKP to control its base, so the timing of elections is critical,” a senior bureaucrat told Al-Monitor.

These five factors indicate the pressure that was coming from within the AKP’s ranks and Erdogan’s base to call for early elections. He has called for an early election now because he calculates it will give him the easiest victory. Erdogan has a winning hand, and waiting until November 2019 just wasn’t in the cards for him.