Turkish academia is in upheaval following the government’s decision to split up 13 major universities to form new ones, while university departments say that the proposal is fueled by ulterior motives and that resources are already spread too thin. 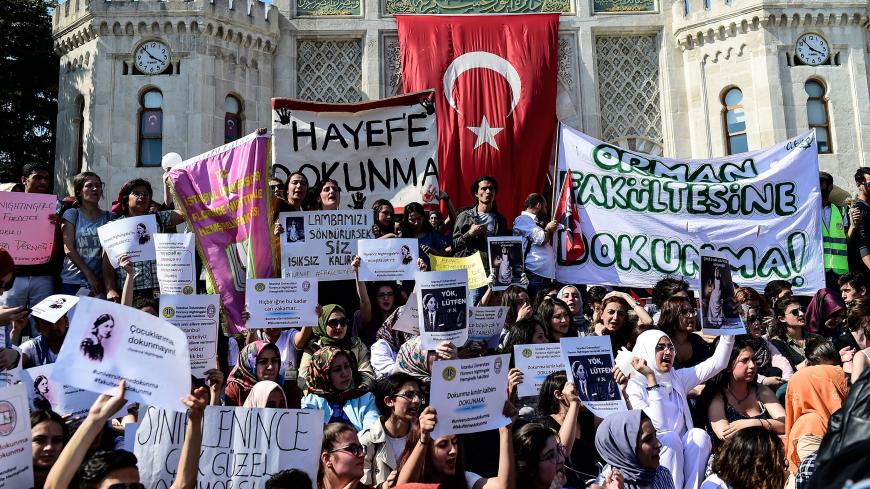 Hundreds of protesters took to the streets in Istanbul and Ankara last week, demonstrating against the government's proposal to split off faculties from many of Turkey's universities to form "new" schools. The government says the move is a pragmatic way to deal with growth, but many opponents believe the plan is motivated simply by greed and politics, rather than what's best for students.

As Turkey quickly approaches its June 24 elections, the Justice and Development Party (AKP) government's radical intervention in higher education is causing turmoil. The intention is to rearrange some faculties from 13 universities — including established, major ones such as Istanbul University — to create new schools. The government’s explanation is that some universities have grown too large to be practical. But many academics and students see the plan as a government effort to gain full control over schools. Thousands of academics signed a petition against the proposal, and there were reports that even patients of Cerrahpasa Faculty of Medicine joined the protests.

Negative reactions have been widespread to all the changes introduced, but the sternest responses have arisen regarding Istanbul University, which was founded in 1453, and Gazi University, which was founded in 1926 by order of Turkey's founder, Mustafa Kemal Ataturk. The primary version of the draft bill called for splitting Istanbul Capa Medical Faculty and joining it with several other faculties from Istanbul University to create Istanbul Ibni Sina University, or Avicenna University. (Avicenna, born in Uzbekistan in 980, is known as the father of early modern medicine.)

When the proposal prompted bitter objections, a new plan called for Capa and Cerrahpasa medical schools to be consolidated under the newly established Istanbul Cerrahpasa University and abandoning the Avicenna historical name. Istanbul University will still lose the following faculties: forestry, health sciences, sport sciences, veterinary, engineering, dentistry, pharmaceuticals and Florence Nightingale Nursing. Those departments will be transferred to the new university.

In Ankara, Gazi University will lose its fine arts, literature, law, communications and business administration departments, which will be put under the new Ankara Haci Bayram Veli University.

Professors, students and civil society organizations say there is no logic behind the decision, that the education system would be upended and historical institutions would disintegrate. Alaattin Duran, the dean of Cerrahpasa Faculty of Medicine, joined several former university presidents in protest and said students want to graduate from the schools they applied to. Students and professors have already protested on social media with sites called “Don’t touch my faculty” and “Stay away from my university.”

With the new schools, there will be 206 public universities in Turkey. According to those who oppose it, this plan will mean a sharp decline in the quality of education, which is already suffering. Currently, no Turkish universities are listed on the world's top 500 leading educational institutions as documented by University Ranking by Academic Performance. Academics cite the need to reinforce the resources and services of existing universities instead of creating new ones.

Some protesters think the idea of opening new schools might be motivated by the lucrative contracts it could create for well-connected vendors for new buildings, catering and transportation services.

Tahsin Tarhan, a deputy of the opposition Republican People’s Party, raised the issue in a letter to parliament. When the existing schools aren't properly managed and the number of unemployed graduates are growing, "why are we creating new universities?" he asked. “There are reports that a political party, MHP [Nationalist Action Party], which is allied with the AKP, has demanded [the division] with the goal of appointing 15 new presidents close to the party. This shows the level the educational system has sunk to.”

Professor Tahsin Yesiltepe, president of the University Teaching Staff Association, also called the decision politically motivated. He said that at many schools there are no professors or associate professors, so classes are taught by instructors. In some places the university president also serves as a dean and department head and there are deficiencies in libraries, laboratories, equipment, housing, cafeterias and cultural and sports facilities.

“While all these problems are well-known, opening new universities cannot be accepted. We are concerned about sinking education and research, about wasting the lives of young people for five or six years under the guise of a university education [when] the real goal is to provide employment to academics and others close to the government,” he told Al-Monitor. “Dividing up the universities with a decree and changing their names is meddling with universities' autonomy and [will] weaken the established scientific institutions. If you divide them, they will disappear. This is to put education under political tutelage.”

Yesiltepe said there is greedy commercial demand for the campuses of Istanbul Capa and Cerrahpasa medical faculties, which are in the city's center.

Professor Cihangir Islam, who was dismissed from Caucasia University in 2017, apparently for criticizing military action against the Kurds, also believes the government's actions have political motives.

“This is a plan not designed to meet the goals of education, but to achieve political ends. I don’t think this plan was prepared based on logic and wisdom,” he told Al-Monitor. “Today, universities do not need to split but [rather] need to consolidate their resources. When you divide them into smaller segments they lose their academic synergy.”

He added, “We don’t need a university in every province, but universities [need] to be established in a major city and serve the region. Too many universities have been opened. Most of them have a serious shortage of experienced, well-trained academic staff. The quality of education is declining by the day and will get only worse with further waste of limited resources. The government’s goal is to divide up the universities to tighten its control over academia. Also, don’t forget, new universities will mean new administrative staff, new buildings and new equipment, all of which will mean new tenders."