Will Jordan reclaim sovereignty over controversial land on Israeli border?

Statements by former Jordanian Prime Minister Abdel Salam al-Majali that a tiny strip of land on the Jordan-Israel border — ceded by Israel to Jordan under the 1994 peace treaty and then leased back to Israel — is owned by Jews have stirred a nationwide controversy. 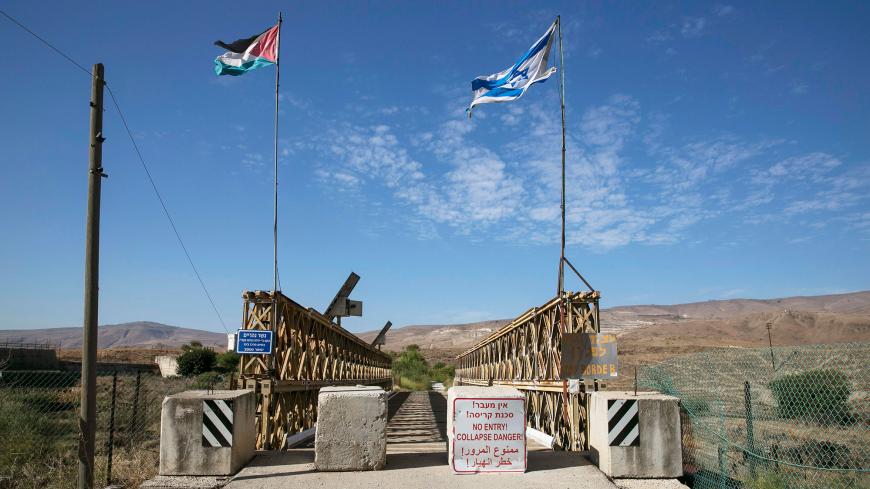 National Jordanian and Israeli flags are seen on the Naharayim (or Baqoura) bridge on the border between Israel and Jordan, northeastern Israel, Oct. 22, 2014. - REUTERS/Baz Ratner

The Jordanian government is considering whether to renew a 25-year “special regime” — under an annex of the 1994 peace treaty between Jordan and Israel — set to expire in 2019. This agreement gives Israel private landownership rights and property interests in the Baqoura area under Jordan’s sovereignty. However, former Prime Minister and chief peace negotiator Abdel Salam al-Majali delivered a shocker in a TV interview March 20. The former premier stated that lands in the Baqoura area, which Israel calls Naharayim, are in fact privately owned by Jews. Majali told Al-Urdun Al-Youm TV station that while Jordan has sovereignty over the area, the land in Baqoura was registered to Jewish owners back in 1926. He said the area was under Israeli occupation and was returned to Jordan, which did not lease it to Israel since it is private property.

The revelations reverberated across the Hashemite Kingdom with Lower House deputies expressing outrage. Two days before Majali’s interview, 20 deputies signed a petition calling on the government not to renew what for the last 24 years has been described as a lease, which covers Baqoura, along the Jordan River, and al-Ghamr in Wadi Araba.

It took the government a few days to respond to the controversy. On March 25, Foreign Minister Ayman Safadi responded to a question in parliament on the issue by confirming that while Baqoura was “privately owned by Israelis since 1926” Jordan maintains sovereignty over the territory, along with al-Ghamr in Wadi Araba. He said that the decision to renew “the lease” or not belongs to the government, which will make the decision “in accordance to the kingdom’s highest national interest.”

But Safadi’s response only added fuel to the fire. Former Minister of Justice Mohammad al-Hammouri fired back March 26 by telling Jo24.net news site that the terms "Israel" and "Israelis" did not exist in 1926. “If the sale did take place then, the deed would have been registered under the names of foreign nationals and that does not affect Jordan’s full sovereignty over the land,” he said. “Baqoura is as Jordanian as Amman and Irbid and under the constitution, the government cannot cede an inch of its territory.”

A detailed study by Jordanian academic researcher Shaker Jarrar, published by 7iber.com in Arabic on Oct. 25, 2017, revealed that under the 1994 peace treaty’s Annex 1(B), Jordan and Israel agreed “that a special regime will apply to the Baqoura/Naharayim area,” noting that they recognize the area is “under Jordan’s sovereignty with Israeli private landownership rights and property interests.”

Accordingly, Jordan undertook, among other things, to grant without charge unimpeded freedom of entry to and exit from the land, not to apply its customs or immigration legislation to landowners, not to impose discriminatory taxes or charges with regard to the land or activities within the area, and to permit uniformed officers of the Israeli police force access to the area.

A similar special regime was also agreed to under Annex 1(C) regarding the use of al-Ghamr area, where Jordanian sovereignty is recognized against Israeli private landownership in that area along the Jordan-Israel border. Nowhere does the word "lease" appear, but instead the two sides “agree that the annex will remain in force for 25 years and shall be renewed automatically for the same periods, unless one year prior notice of termination is given by either party, in which case, at the request of either party, consultations shall be entered into.”

In his study, Jarrar explains how Baqoura lands ended up being owned by Jews. He says that Pinhas Rutenberg, a Russian-born Zionist, won a concession in 1926 from the British Mandatory government in Palestine to generate electricity in the Baqoura area using waters from the Yarmouk and Jordan rivers. On Jan. 8, 1928, the government of Transjordan approved the 70-year concession. In the process, Rutenberg was able to purchase 6,000 square meters (roughly 1.5 acres) of land in that area. Jarrar adds that the land deed, which is kept at the Irbid Land Department, stipulates that Rutenberg cannot transfer ownership of the land to a third party. But Jarrar insists that Rutenberg did sell thousands of square meters to the Jewish Agency. Baqoura was occupied by Israel following the 1948 war.

Jarrar’s study, which was reposted by 7iber.com in English following Majali's interview and the ensuing controversy, forced deputies, political analysts and officials to revisit the treaty. Former Minister of Information Taher al-Udwan wrote March 25 on Maqar.com that following Majali’s revelations, which “fell on our heads like a hammer," he re-read the articles of the peace treaty “only to discover that we as political parties, politicians and the media were fast asleep [when the treaty was passed by parliament on Nov. 6, 1994] when we believed the story of leasing and liberating our land.” Udwan added, “Now we know that the land was neither leased nor liberated and that our sovereignty is incomplete.”

Udwan called on the government not to renew the agreement and to annul Israel’s ownership of Jordanian lands. His call was echoed by the president of the Jordan Bar Association, Mazen Irsheidat, who on March 27 told Jo24.net that Jordan land sales to Israelis should be annulled since Jordanian laws do not allow land sales to Jews.

In his column in Al-Ghad daily on March 27, political commentator Fahad al-Khitan said the controversy over Baqoura will continue for weeks to come since it is tied to Israel. He noted that the government finds itself in an unenviable position because of legal constraints that have been imposed on it (by the British Mandate authority) 84 years ago. He concluded by saying that ironically in 1950, then-Defense Minister Fawzi al-Mulki, who is the father of present Prime Minister Hani al-Mulki, told parliament that Baqoura was a Jordanian territory by international law and that the government was determined “to repulse by force Jewish aggression on it.” Khitan asked, "Now that the son faces the same challenge as his father did 68 years ago, will he fulfill his father’s promise and regain full sovereignty?"