The ancient craft of building boats, which is one of Iraq's oldest heritage industries, is disappearing, with only a few dozen workshops left in the country. 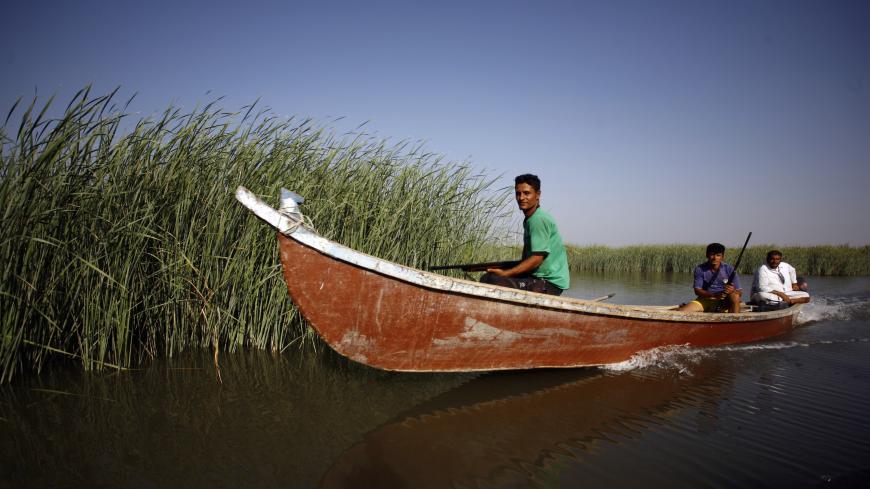 Iraqis hold guns as they hunt in the Chibayish marshes near the southern Iraqi city of Nasiriyah on Sept. 13, 2016. - GETTY/Haidar Hamdani

When Iraqi Prime Minister Haider al-Abadi paid a visit to the Iraqi marshlands in September 2017, photos showed him on a mashoof, the traditional narrow canoe that has been in use in the region for centuries. Yet the boat, a symbol of transportation in this UNESCO-protected area, may well be the part of the region’s heritage on the verge of extinction.

The owner of a mashoof boat, Razaq Jabbar, a traditionally dressed man with a sunburnt, wrinkled face, told the media March 25 that he was proud to take the Iraqi prime minister on his boat. Jabbar is one of the few dozen skilled artisans who continue to build these boats, and he might be the last in his family to continue the trade.

According to the head of the Chibayish Tourism Organization, Raad Habib al-Asadi, there are less than 50 mashoof manufacturers in southern Iraq who continue their craft. They are located mostly in the towns of Basra, Hillah and Kufa, where vast rivers and swamps are found.

“Our organization is observing the disappearance of this traditional industry, as manufacturers abandon it in search of other work,” Asadi told Al-Monitor. “The decrease in manufacturers is in parallel to the decrease in water levels [in the Iraqi marshes] and the drying up of rivers and swamps.”

The Iraqi marshlands were drained in parts from the 1950s onward, to reclaim land for agriculture and oil exploration. In the 1980s and 1990s, President Saddam Hussein drained the area even further. “The campaign sought to wipe out government opponents who were hiding among the marsh reeds and forests, ultimately forcing local people to migrate. The drying of Iraq’s marshes and rivers from low water levels has led to the disappearance of many workshops of this traditional industry,” Asadi said.

UNESCO eventually placed the wetlands, thought to be the biblical Garden of Eden, on its heritage list in September 2016, describing it as "one of the world's largest inland delta systems in an extremely hot and arid environment" and "a refuge of biodiversity in the relict landscape of the Mesopotamian cities."

The history of the mashoof, one of the main ways of regional transportation, goes back to the Sumerian civilization that flourished in Iraq around 5,000 B.C. Iraq’s inhabitants of the time manufactured mashoofs from tar materials, a tradition that is used until now.

“We have drawn attention through the media of the extinction of this profession, but there is no response from the government to improve the situation [and make this profession attractive to the younger generation],” Asadi noted.

Asadi introduced to Al-Monitor one of the longest-standing families in the trade — the al-Kanbar family, who has been manufacturing mashoofs in the ​​Chibayish region for as long as anyone remembers. One of their sons, Ali al-Kanbar, explained that many different materials can be used to build the narrow boat, such as “mulberry trees, cedar and jasmine trees, as well as the reeds and papyrus growing in the marshes.” These are used to make the skeleton of the mashoof. “Later, industrial fiberglass material was also used to build the structure. It is then lined with cotton to fill the gaps between the arched wooden panels that give the mashoof its streamlined shape. It is then coated with oil and tar to prevent water and moisture leaking into the boat,” he explained.

The mashoof is not the only type of boat that is seen in the marshlands. The long and lean mashoof is used mostly for transporting various goods; the “kaad” is a smaller fishing boat, and the “jalibut” even smaller and narrower that is used for river excursions. A larger boat made with the traditional design — called "basim” — is also used for river tours as it can seat more people. These boats cost between $500 and $1,000 to manufacture and can go as high as $4,000.

“The mashoofs have decreased in number and size,” said Kanbar, explaining that the mashoof is now rarely used for transporting food, agricultural products and animals. “Fuel-driven boats — which can carry larger loads — replaced traditional ones, destroying a manufacturing industry that requires more effort, time, special materials and rare skills.”

In the district of Krit'a on the Hillah River in central Babil governorate, boat craftsman Hussain al-Khafaji told Al-Monitor that there are only four workshops remaining that build boats. “The city used to be teeming with fishing and picnic vessels made in these workshops,” he said.

In the surroundings of the Kufa River, a southern branch of the Euphrates, only four traditional workshops remain. Sheikh Haider al-Kufi, who lives in Kufa, in Najaf province, learned the profession from his ancestors, who have been masters of the trade for some 200 years. He told Al-Monitor that thousands of boats were manufactured in local workshops in the past.

“The times when Kufa's Corniche Street was home to around 30 mashoof workshops is now a thing of the past. There are now only about 10 manufacturers left. We are making barely four or five boats [per year] because of a lack of demand,” he said.

The head of the Agricultural Committee and member of Babil Council, Suheila Abbas, gave further reasons for the decline of this heritage industry, besides new means of transportation. She told Al-Monitor, “The decline in river levels has led to a reduction in the number of fishermen and a reduced need for the transport of agricultural products.”

Abbas believes that it will not be long before these workshops disappear completely. “An intervention by the relevant heritage manufacturing industries is therefore needed to address the issue, before the mashoof becomes a mere relic in museums,” she said.

Member of parliament Abdul Hadi Mohan al-Saadawi expressed his concerns to Al-Monitor about the disappearance of the mashoof and reports indicating the loss of this symbol of Iraq’s marshes and waterways. “There is a reduction in the need for this type of boat in many rivers. This makes the industry’s workshops — a key facet of our heritage — worthy of support and development by the related committees in the Ministry of Culture,” he said.

He concluded, “The Ministry of Industry must support these skills and craftsmen, encouraging the continued practice and innovation of the trade, because it is a national icon representing some 5,000 years of our history. The mashoof that is used in the marshes today is the very same mashoof used in the Sumerian and Babylonian civilizations, in terms of its form and raw materials, as is depicted in historical drawings and artifacts."