A modern dance troupe composed of religious Jewish men is forcing the ultra-Orthodox community to confront questions of art and self-expression. 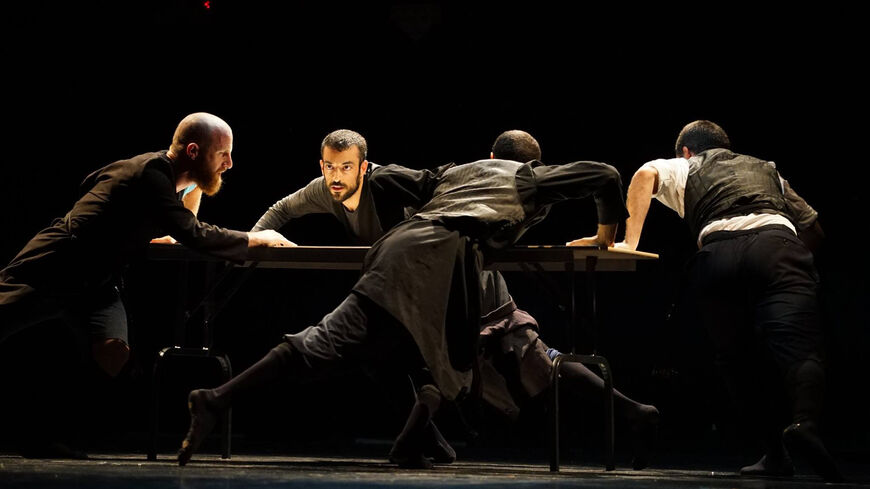 “The Kaet Dance Ensemble brings up questions about the human body of the Israeli-Jewish man, which goes through rapid changes and dilemmas regarding his masculine identity. Does the body still carry the Torah and the spirit within, or [is it simply made up of] muscles and flesh of a soldier-athlete? [The ensemble] offers a third possibility, the fusion that is created in the complexity of the Israeli lab.” This is how the Kaet Dance Ensemble, a dance troupe consisting of religious men in yarmulkes (traditional Jewish skullcaps), describes itself through one of its works, titled “Heroes.”

The ensemble has a unique message for contemporary Israeli culture: Religious men are also allowed to dance, and Jewish heritage certainly plays its part. Their performances consist of a combination of modern dance moves with Jewish elements such as the motions used in prayer and various religious texts. The dancers sometimes appear in ultra-Orthodox garb.

“In Israel’s macho climate, it’s not easy to admit that you love to dance,” said Ronen Izhaki, the general manager of the Between Heaven and Earth center and the troupe’s choreographer. “The mood in the religious community is actually different. In the synagogue, people feel a special affinity for the melody of the prayers, the motions, to closing their eyes and connecting with the inner emotional and physical world. It fulfills a spiritual need.”

In regard to the change brought about by the transition from the Diaspora Jew to the proud Israeli, Izhaki told Al-Monitor, “Israeli-Jewish masculinity incorporates the transition from a Diaspora existence in which men sat crammed in yeshivas to a life of working the soil and protecting the land of Israel in the early 20th century. Jewish men became powerful pioneers. They went from sitting soft and stooped to standing tall and strong. This is the creative setting for contemporary male Israeli dance.”

If that's the mood among Israelis in general, it is even more the feeling among religious Israelis. Eyal Ogen, one of the founders of the troupe, can already see the changes that he and his friends have made in the way religious Jews perceive the body. He told Al-Monitor, “We had gotten used to the idea that in Judaism, the body is not much more than support for the head, which gets all the important tasks such as studying the Torah and living a spiritual life and so on. With dance, we are exposing the religious public to the possibility of expressing themselves through the body as well.”

Ogen, who comes from a Yemenite family, used to dance at home every Saturday night and at every family event. The Yemenite step, a traditional dance move, is part of his cultural heritage. However, after he saw the Bathsheva Dance Company perform for only a few seconds, he realized this was what he really wanted to do. One of the rabbis at the yeshiva showed the students a few seconds of the troupe dancing, to illustrate a type of dance that is forbidden according to Jewish law. This attempt to place boundaries on dance opened the gates for Ogen and his friends.

Ogen met Izhaki after completing his military service and was finally able to fulfill his dream. Their dance club for religious men expanded and flourished until a decade ago, when it became a dance center with its own dance school.

The troupe first performed at a festival at Beit Avi Chai in the summer of 2010. They came up with the name “Kaet” ("Now") on a whim. Their big break came when Janice Ross, professor of theater and performance studies at Stanford University, saw the troupe perform at the Jerusalem Theater. She wrote an article about it in The New York Times in 2011, describing the performance as “spare yet emotionally rich work that takes gestures from daily prayer movements along with chants and synagogue attire, and gently shifts and reframes these elements as postmodern dance.”

Over time, the Israeli media also began to show interest in the troupe. Reports about it appeared in several places, including Channel 1. The news report described how complicated it is to bring professional and amateur dance to the one group in society that had consciously avoided it until then: religious men. Once they had gotten around the religious prohibition of women dancing by having only men perform, they had a religiously valid means of filling what turned out to be a very deep-rooted need. Since religious women are not forbidden to watch men dance, the ensemble’s religious audience grew. News of the troupe started spreading like wildfire.

Ogen noted that so far, the ensemble has not met any real opposition from rabbis who toe a stricter line, nor have there been calls to boycott their performances. “That may still happen when more people hear about us,” he said. He added that the religious Zionist yeshivas that are considered to be more moderate regard them as trailblazers. Some have even invited the dance troupe to perform for their students.

Street performances are especially exciting for the members of the ensemble. The crowd joins in and the experience of integrating into the multicultural panorama of a complicated city like Jerusalem, with the light rail and the urban bustle in the background, can be electrifying. That's how they felt during a performance in August 2014 on Havatzelet Street in downtown Jerusalem.

The international dance world is also opening up to them via performances at Jewish centers abroad. In preparation for a show in London, the ensemble shot a video in the streets of Jerusalem and London. They returned from New York a month ago after appearing before Israeli and American Jewish audiences. The ensemble has performed in Singapore and Barcelona, and the invitations continue to pour in.

Their success has led to greater diversity within the dance school. There are now separate study tracks and workshops for men and women, and also for mixed groups. Ultra-Orthodox composer and professor Gidon Levinson, whose compositions are performed by symphony orchestras all over the world, is in charge of the music.

Izhaki said that the Between Heaven and Earth center hosts interactions between all sectors and artists from different communities, representing each of the Israeli “tribes”: the ultra-Orthodox, modern Orthodox, secular and even Arabs, though he admitted that projects involving Arab partners are still few. Nevertheless, Arabic cultural elements are integrated into the center’s amateur dance troupe, named “Mahia.” One dance, for instance, combines Hassidic Jewish elements with an Arab dabke in which the dancers wear ultra-Orthodox costumes topped with Arab headscarves, or kaffiyehs. In spring 2017, when they performed this dance in Jerusalem’s Mahane Yehuda market, the vendors joined in, and during their performance at Jaffa Gate in the Old City, Arab passersby danced also.

Izhaki and Ogen told Al-Monitor in a joint statement, “We are dancing on the shoulders of giants and benefiting from a rich cultural legacy of dancers, thinkers, dreamers and doers, musicians, artists and poets, producers, rabbis, designers and others. They all come together to create a new narrative within the world of Israeli discourse, in all its distinct shades.”